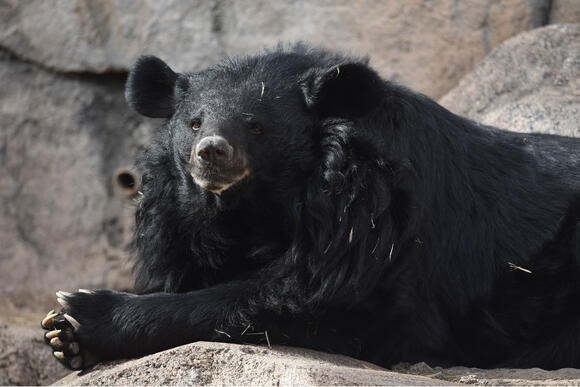 (Colorado Springs, Colo.) Honey, a 29-year-old Asiatic black bear, started showing signs of illness and pain last week. After an exam, her veterinarian decided it was time, and the zoo euthanized her over the weekend.

Honey, and her sister Beezler, lived at the Cheyenne Mountain Zoo since they were a year old. Asiatic black bears live in only four accredited North American zoos. In the wild, Asiatic bears live in Eastern Asia, from Afghanistan to Taiwan and Japan. The World Conservation Union classified the species as “vulnerable” to extinction.

Honey was the oldest-known Asiatic black bear living in captivity at her death. She was tied with her sister. Females have a median life expectancy of 29.3 years, according to Cheyenne Mountain Zoo.

“I had walked by their exhibit for years, but until I met and started working with them a couple of years ago, I never realized how cool they were,” said Courtney Rogers, lead animal keeper for the sisters, in a news release. “Even though they were sisters and lived together all their lives, Honey and Beezler had very different personalities. We often described Honey as a ‘sweet old lady,’ but she could also be super assertive at times.”

According to the zoo, Honey and Beezer did their jobs perfectly -- zoo attendees year after year have fallen in love with the pair. Now, contributions from those attendees will go to an Asiatic bear conservation program in Vietnam.

The relationship between the sisters was part of what drew in zoo guests and charmed zoo keepers.

“Honey was very tolerant of Beezler,” said Rogers. “We set up a physical therapy room for them to help keep them mobile and active, despite the advancing arthritis they both had. There were toys and treats everywhere – even up high, where they would really have to work to reach them. One time, we saw Beezler use Honey’s back as a ladder to reach some snacks. Honey allowed her to do it, and was rewarded when Beezler knocked the treats down to Honey.”

Even though the pair had the option to sleep in separate dens, keepers often found them sleeping near each other in the same den.

Since Honey’s passing, the keepers watch Beezler closely as she adjusts to her sister being gone. On Honey’s last day, Beezler cleaned her paws and spent time with her.

Honey was a wonderful ambassador for her species, and she will be greatly missed, the news release said.