Cindy Sanchez is a recent graduate of the Millersville University of Pennsylvania, where she earned a B.A. in English - Journalism and Public Relations. Throughout her final year as an undergrad, Sanchez worked with a local Spanish-English newspaper, La Voz Latina Central. She enjoys writing about pop culture, lifestyle, and people. 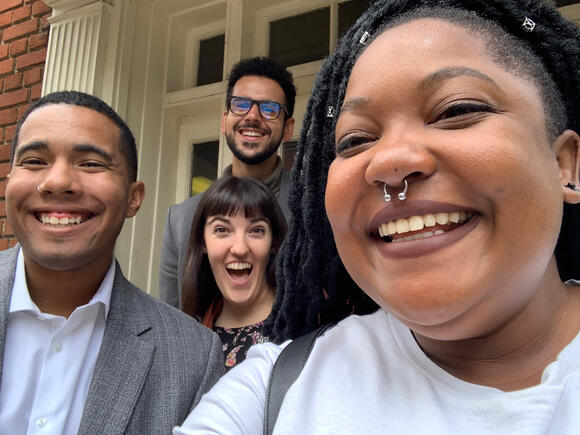 YWCA Lancaster and SafeHouse Lancaster created a partnership over the past year, creating programs, discussions and building a space for the community.

"It made sense for us to go with an organization that had not only the money and space to build out our programs but also had been around for a long time and fit very well with our values," said SafeHouse founder Isaac Etter.

SafeHouse Lancaster hopes that through the merger, major planned projects will be doable.

The ABC Group project is an anti-racist Business and Community group for business owners who want to learn more about anti-racist practices and policies and how to implement them in their business.

Another program is the Everyday Activism program that Etter built for college-age Black and brown people. The program is a 10-week intensive class on what activism is, who causes the social issues, how people can bring change and how to build plans for systemic change.

Etter has been an activist for the past six years and plans to continue contributing to the community in other ways. He chooses to sit on boards and be an advisor to several committees rather than run SafeHouse Lancaster.

"I've been running a consulting firm for the past three years, working on adoption, so we're expanding on that business and turning it into a tech company," said Etter. " We're building a lot of tech solutions to issues in child welfare."

The merger will keep the SafeHouse Lancaster mission alive and move YWCA Lancaster into a new direction. Programs that will empower the Lancaster community will continue to grow and train other community members to join.

"The win here was keeping our programs alive and keeping our mission alive," added Etter.

Cindy Sanchez is a recent graduate of the Millersville University of Pennsylvania, where she earned a B.A. in English - Journalism and Public Relations. Throughout her final year as an undergrad, Sanchez worked with a local Spanish-English newspaper, La Voz Latina Central. She enjoys writing about pop culture, lifestyle, and people.

(LANCASTER, Pa.) Located in South Central Pennsylvania along the Susquehanna River, Lancaster has a rich history dating back to 1729. The county is just an hour and a half west of Philadelphia and provides a perfect escape from the bustling city.

Forested area by the Conestoga RiverLancaster County Commissioners. (LANCASTER, Pa.) In May, the Lancaster County Commissioners reached an agreement to purchase a 75-acre tract from Clyde and Shirley Kreider. The land is on a Lancaster Township peninsula bordered by the Conestoga River on the city’s outskirts. Due to its quiet location, many residents worry about the future of the area with a new prison nearby.

Mikhail Zapata-Rotz received his League of American Bicyclists Instructors certificationAdriana Atencio / The Common Wheel. Located in the heart of Lancaster City, nonprofit bike shop The Common Wheel has played a valuable role in transforming the community through the power of bicycles.

Brian Graves hosting Pride Surprise at Zoetropolis Cinema StillhouseBrian Graves. (LANCASTER, Pa.) June is Pride Month, and as the country begins to go back to normal from the COVID-19 pandemic, this year gives everyone an even bigger reason to go out and celebrate the work of LGBTQ+ activists who have changed history.

John Maina and Nicole Vasquez of Central Pennsylvania Equity Project speak to Lancaster County Prison Board about cash bail reformJohn Maina. (LANCASTER, Pa.) Over the past year, Lancaster has seen several grassroots organizations grow and fight with one common goal: bringing an end to the unjust system targeting communities of color. Inspired by the deaths of George Floyd and Breonna Taylor, the local community saw that Lancaster County was no different from other cities across the country reckoning with racism and knew that change needed to happen.

(LANCASTER, Pa.) Lancaster County Commissioners approved the $3 million land purchase for the proposed construction of a new county prison. The board reached an agreement with Clyde and Shirley Kreider to purchase the 75-acre tract located on a Lancaster Township peninsula bordered by the Conestoga River. The Kreider property is estimated to be ten times larger than the current site. The site fits all of the necessary criteria the county searched for regarding space, vacancy, access to water and sewer, is located within five miles of the Lancaster Courthouse, and has minimal impact on residential neighborhoods.