A closer look at New Jersey's battle against the opioid epidemic 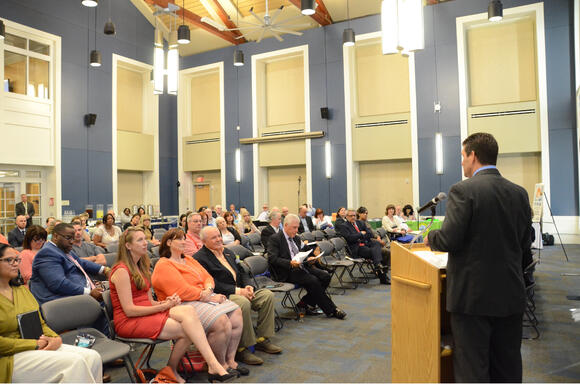 For so long, the news has been dominated by headlines regarding the coronavirus pandemic, but more recently, another endemic has been brought back to the forefront: the opioid epidemic.

During the COVID-19 pandemic, the number of deaths by opioids skyrocketed. The pandemic reportedly affected peoples’ mental healths and willingness to seek medical treatment for their addictions, increasing opioid overdoses.

“There's no question that there's a tremendous amount of responsibility that lies at the doorstep of the pharmaceutical companies,” said Angelo Valente, the executive director of a Partnership for a Drug-Free New Jersey (PDFNJ), the state’s largest public service campaign driver.

Perhaps the greatest evidence of this is the latest updates in the cases against Johnson & Johnson and Purdue Pharma.

On June 26, Johnson & Johnson agreed to pay the state of New York more than $230 million in a settlement, ensuring that the company would pull out of the opioid business in the United States for good. This settlement came days before opening arguments were scheduled to be held in a sweeping New York trial, in which Johnson & Johnson was to be a defendant.

Since the corporation settled the case, it will not have to go to trial and, thus, does not have to admit either liability or wrongdoing. However, Johnson & Johnson is banned from selling opioids in America and has already stopped selling opioid products since last year, when it ceased its production.

On July 8, it was then announced that 15 states had reached a deal with Purdue Pharma, a large pharmaceutical company that made the prescription painkiller OxyContin. These states are in the process of settling a $4.5 billion lawsuit against Purdue Pharma and its owners, the Sackler family.

While the money from both of these settlements would reportedly go to helping out families and communities deeply affected by the opioid epidemic, state attorneys general and victims’ families alike do not think that these companies have done enough to make up for the damage they have caused.

People all across America are still experiencing the effects of the opioid epidemic.

Fortunately, in New Jersey, the number of deaths caused by opioid overdoses in 2020 held steady at 3,046, which was only slightly up from the 3,021 suspected deaths in 2019.

Valente suspects that this is because of the successful collaboration between the government, legislature, Office of the Attorney General and PDFNJ, to name a few. These groups and officials have focused on putting the patients’ needs first.

Valente said, “New Jersey has been at a stable level [of opioid-related overdose deaths] now. Of course, that level is too high. You know one life is too many to lose.”

That is why the PDFNJ focuses a lot of its attention on helping people learn how to protect themselves. It may seem as simple as handing out a couple of brochures, but there’s a lot more power in knowledge than people may realize.

According to Valente, there are two reasons why the prescription of opioids has changed so much in the last few years.

One is that many states, including New Jersey, set a certain amount of days before opioids can be prescribed for the first time for acute pain, caused by anything from wisdom tooth extractions to broken limbs.

Another reason for the decrease in opioid prescriptions has been that consumers, patients and their families are more informed of the potential risks these drugs bring and the alternatives.

This is crucial because when people are in their early 20’s their brains are still developing, and opioids can hurt their brain development, Valente said.

Preventing young adults from getting hooked on these medications is a great first step to tackling this epidemic.

On the government’s part, New Jersey has developed many policy initiatives to combat the epidemic, such as requiring doctors to take continuing medical education courses that require them to study up on alternatives to opiates that they can prescribe.

New Jersey was also the first state to implement the Patient Notification Act.

The law was born from tragic circumstances. Steven and Elaine Pozycki lost a son to the epidemic when, after he had repaired a rotator-cuff he hurt in a ski accident, he was prescribed opioids and became addicted.

They firmly believed that if their doctor had told them about the addictive qualities of the opioids or pointed out the possible symptoms of addiction, they would have been able to save their son, Valente explained.

The Patient Notification Act is meant to simultaneously educate families as well as decrease the dependence on prescribing opioids. But just how successful is this law?

According to a 2020 study commissioned by the PDFNJ and conducted by Dr. Andrew Kolodny, Medical Director of Opioid Policy Research at Brandeis University, prior to the implementation of the Act, only 18% of medical practitioners would warn patients of the addictive properties of opioids, whereas after the Act was introduced, 95% would warn their patients.

These percentages can mean the difference between life and death for people. The law is now replicated in 18 states and has been introduced into Congress under the name, “Opioid Patients' Right to Know Act.”

“In some ways, it's so simple. It's common sense. If somebody's getting a prescription for something that in five days can turn into a dependency for an individual, whether it be an adult or a child, that information should be shared with the patient,” Valente said.

So what part can you play to combat the opioid epidemic in New Jersey?

On October 6th, the PDFNJ will be hosting its sixth annual “Knock Out Opioid Abuse Day,” an event where nearly 10,000 volunteers distribute information regarding the dangers of opioids to all their neighbors and online. This event allows everyone to get the word out on opioid addictions.

If you can’t make this event virtually or in-person, the PDFNJ also hosts town hall meetings across the state informing people about the basics regarding opioid addictions.

“All of us have a responsibility to ask questions prior to receiving a prescription,” Valente said. “Share [opioid-related] information with your family and friends. That's another way in which an individual can be a big help.”

New Jersey's real estate prices have been on the rise. Nowhere is that more evident than in Gloucester City.Photo by CHUTTERSNAP on Unsplash. No matter if you are a first-timer or veteran homebuyer, the current real estate market has changed drastically in the last few years. In a recent analysis done by the Otteau Group, a real estate consultancy firm, it was observed that home prices across the state of New Jersey increased by 12% in 2020.

Professor David Robinson has observed weather patterns in New Jersey for a long time as the state's climatologist.Photo by David Robinson. After the summer we have had, you can now probably recognize the sounds of a massive downpour overtaking your neighborhood and strong winds assaulting your house.

Preserving the history of New Jersey during COVID-19

The New Jersey Historical Commission is helping to preserve historical places, like the Fosterfields Living Historical Farm.Photo by Alliance for Morris County Parks. The pandemic has affected operations in a lot of public venues, from concert spaces to restaurants to even museums and places of historical relevance. It has been difficult for these historically relevant places during these times to find ways to connect with patrons online or without hands-on touring experiences.

Send Chinatown Love: An organization created by Asians, for Asians

There are increasing discussions surrounding when is the proper time for New Jersey students to return to school.Photo by Element5 Digital on Unsplash. In May, Governor Phil Murphy announced that all New Jersey schools will be returning to in-person, full-time instruction in the fall. While many are excited about the return to campus, and most are already back in person, there are still some parents and counties that are hesitant about fully reopening.

The Mayo Performing Arts Center is excited to welcome you back

The Mayo Performing Arts Center (MPAC) is reopening at full capacity this September after having limited audiences for more than a year.MPAC. The Mayo Performing Arts Center (MPAC), originally built in 1937, has been a staple of the Morristown, New Jersey community for generations. When the pandemic hit, the theater shut down, just like most communal gathering places in local towns and neighborhoods across America.

As Gov. Phil Murphy (D-N.J.) gets ready to run for a second term, there are increasing oppositional voices over his campaign promises.Photo by Element5 Digital on Unsplash. Gov. Phil Murphy’s (D-N.J.) new platform for the upcoming election seems focused on addressing concerns from progressive and independent voters, while also juggling reopenings in the wake of COVID-19.