The biggest topic of discussion for any sports fan for their team and in general, who is on your Mount Rushmore? Most people put their favorite players but to do it right you wanna put a combination of past and present who have made the greatest impact on the franchise, there is no wrong answer to who you will have on Mount Rushmore and hopefully, this will encapsulate all of chiefs Kingdom. 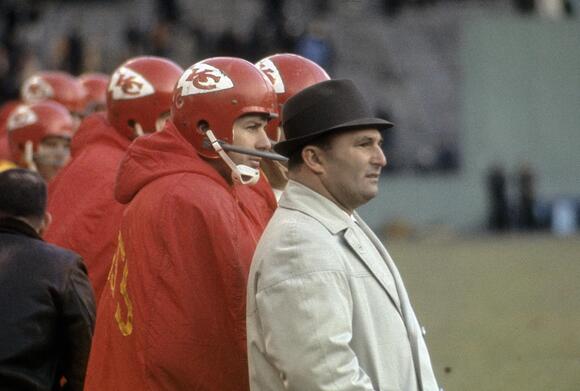 Like George Washington was the first leader of our country Hank Stram, the team's first head coach, led the Chiefs to three AFL championship victories and two appearances in the Super Bowl including the first super bowl victory. Stram was the team's longest-tenured head coach, holding the position from 1960 to 1974. 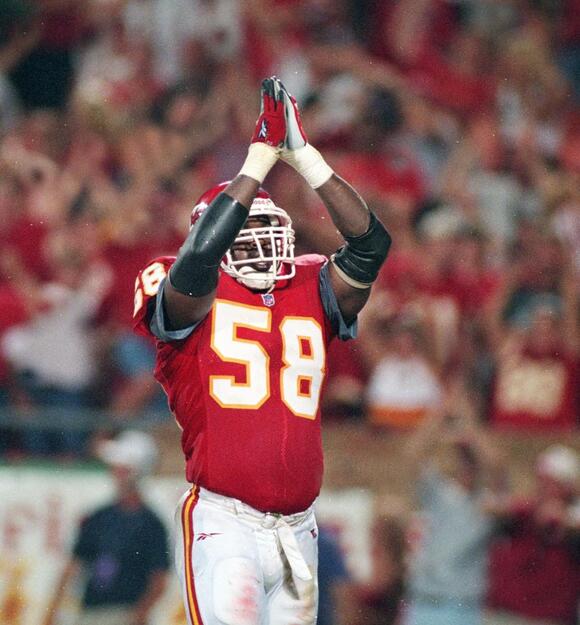 This is without a doubt the not only greatest defensive player in the history of the Chiefs but also top 5 of all time. Derrick Thomas came to Kansas City as the 4th overall pick in the 1989 NFL Draft, Thomas quickly made his presence felt in the league winning the rookie of the year award and a pro Bowl to finish the 89 season and during the 90s he didn't stop being on a first or 2nd all pro team 6 times made the pro bowl 8 times was the league's leader in sacks in 1990 and lead the league in forced fumbles twice, was on the all-decade team and still holds the record for sacks in a game with 7. The accolades go on and on but he didn't just make an impact on the field but was also all pro in the community as well winning the Walter Payton Man of the year award in 1993. Derrick Thomas will always be a legend in Kansas City, and you cannot have a Mount Rushmore without him. 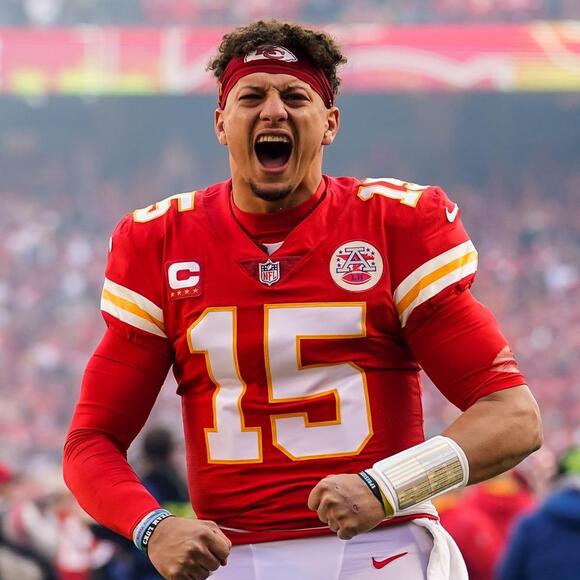 You can't have a chiefs, Rushmore, without the greatest quarterback in the franchise's history not only did they use a 1st round pick for Mahomes which was rare for the franchise they also traded up to the top 10 to get him. He has broken multiple team records in just a short amount of time, is the first MVP in franchise history led the team ton4 straight AFC Championship Games back-to-back super bowl appearances, and the first Superbowl title in 50 years and he has only been a starter for 4 years. Mahomes changed the franchise from an expectation standpoint as a once competitive team that made the playoffs to a Superbowl contender. Mahomet has a realistic chance to break multiple League and team records before his time is over and will not only be on our franchise Rushmore but the league's Mount Rushmore as well. Mahomes not only does great things on the field he is a force in the community and is investing in Kansas City to make it a great place to be.

I went back and forth between Tony Gonzalez and Kelce as no matter the personal feelings any fan has about Tony you can't deny he was a force and was one of the league's best during his time in the NFL. I landed on Kelce because he changed the game for tight ends and is doing things no right end has done before him with 6 straight 1000-yard seasons is close to passing Tony for franchise records and will be number 1 by the end. He is a beloved player both on and off the field and loves this team and this city.

Mount Rushmore picks will always be forever changing and that's what makes them fun, as long as you honor the history of the franchise you can never go wrong.

The Chiefs go into their 5th AFC Championship Game

A hobbled Patrick Mahomes led the Chiefs to its fifth straight AFC Championship game win a 27-20 victory over the Jacksonville Jaguars. Patrick Mahomes suffered an ankle injury near the end of the first quarter that clearly bothered him all game. The injury would cause Mahomes to miss one drive.

The 2023 Free Agent QB Class Is Looking Like A Great One.. Let’s Check It Out. Thank you for reading this post, don't forget to subscribe!. While the rest of the free agency market has much to be desired for this offseason, the quarterback market will see a lot of movement for needy teams.

Why The Chiefs Should Resign WR JuJu Smith-Schuster. Thank you for reading this post, don't forget to subscribe!. Kansas City Chiefs wide receiver JuJu Smith-Schuster is currently on a 1 year, $3.7 million contract and is set to become a free agent this offseason. He has been a fantastic addition to the Chiefs offense this season. Here is why the Chiefs should extend the star receiver.

5 Reasons Why The Mayor of Sack Nation Should Be DPOY. Thank you for reading this post, don't forget to subscribe!. Chiefs star defensive tackle Chris Jones has always been a defensive force for the Chiefs front seven. He was even recognized as one of the best defensive players in the league in 2018 after a stellar 15.5 sack season.

Can Chiefs Rookie Linebacker Leo Chenal Be A Playoff X-Factor For The Team?. The NFL playoffs are about matchups and finding ways to create opportunities for certain teams’ dynamic star athletes. While much of the attention will focus on each team’s marquee names, the playoff teams that advance are typically the ones that have a few lesser-unsung hero type of guys step up in big moments. Basically those guys you don’t hear a lot about during the regular season but bring their best game for last in the postseason.

Here Are The NFL Coaches With The Hottest Seats. Thank you for reading this post, don't forget to subscribe!. It’s that time of year when the hot seat is burning hot for some NFL coaches. I’m going to review some coaches on the hot seat and whether I think they will get fired.

The Kansas City Chiefs Defeated The Seattle Seahawks In A Cold Christmas Eve Matchup. Thank you for reading this post, don't forget to subscribe!. Chiefs fans cheer through the freezing cold weather.Photo bychiefs.com.

Kansas City Chiefs kicker Harrison Butker has had a shortened season due to an ankle injury in week one. Since coming back, he has reserved a lot of hate for his performance. However, the numbers don’t back up the fans’ frustration for his mishaps. Yes, Butker has missed field goals this year and yes a couple of those may have won ball games. However, his accuracy rate is still at bare minimum average.

Pacheco and McKinnon- The Most Unstoppable RB Duo In Football?

Thank you for reading this post, don't forget to subscribe!. Justin Miles (@justm1les) Jerick McKinnon Isiah Pacheco Tommy Townsend Mecole HardmanPhoto byUSA Today. The Kansas City Chiefs have been one of the best teams in the NFL. Having a great team obviously requires many contributors across the franchise. A couple of crucial pieces for the team that has not gotten the recognition deserved are the running backs. The duo of Isiah Pacheco and Jerick McKinnon has been electric for several weeks.

Who Are The Top AFC Teams?

By: Justin Miles (justm1les) The NFL is coming up on week 9, meaning the season is right around the half way mark. Let’s take a look at the AFC playoff picture and breakdown some stats from the season thus far.

After a full week of transactions, including a record 10 trades conducted on the day of the deadline, the Chiefs were able to make a few moves. These moves were highlighted by last week’s trade with the New York Giants, acquiring former first-round pick Kadarius Toney. In exchange for Toney, the Chiefs gave a 2023 3rd- and 6th-round pick.

Winners and Losers from Week 6

The Kansas City Chiefs weren’t horrible this past week at home versus the Buffalo Bills. But the team fall short of beating the Bills losing 24-20 with now falling 0-2 in two straight regular-season games at home to the Bills. We will see them again in the postseason but we have to dominate at home.

Chiefs Trade Rumors: Are the Chiefs in the market for OBJ? Pass rushing help?

Are the OBJ rumors true? Are the Chiefs in the market for pass rush help?. We are six weeks into the 2022 NFL season and teams are starting to figure out what roster positions should be addressed before the November 1 trade deadline. Many teams are looking to add help right before the playoffs arrive. Most front offices find themselves adjusting the cap space, needed to make big moves. The Chiefs have cleared $3.5 million in cap space after restructuring tight end Travis Kelce's contract. Kelce is still signed through the 2025 NFL season and is off to another hot start. The All-Pro TE currently leads the Chiefs with 455 receiving yards and 7 touchdowns on 41 catches (52 targets).

Trade rumors: What will the Chiefs do before the trade deadline?

We have made it through the first quarter of the NFL season. The Chiefs are 3-1 (should be 4-0, thanks a lot EB) and are doing well as they face the Las Vegas Raiders this Monday night at GEHA Field at Arrowhead Stadium. As we get ready for the second quarter of the season to begin Sunday, teams are looking for ways to improve in order for a SB team that needs one more player of a playoff push or build for next season early. The trade deadline is on November 1 and we are 23 days away from the final period where teams can get deals done. In this article, I will list what the Chiefs would do on their side and possible moves that can happen.

The Chiefs Pull Out A Win Despite The Refs’ Mistakes. Kansas City Chiefs star defensive tackle Chris Jones was flagged for an egregious roughing the passer call. This call came less than 24 hours after Tom Brady and the Tampa Bay Buccaneers were given a free first down in a key fourth down.

The Chiefs dominated the Buccaneers for a 41-31 victory.

The Chiefs answered the call against the NFL’s best defense when they showed they put up points quickly and with enthusiasm. Quentin Morris @quentincmorrisThe Kansas City Chiefs stuck it to the Tampa Bay Buccaneers and dominated them for all four quarters on Sunday night football.