5 quick observations after the Chiefs-Chargers game 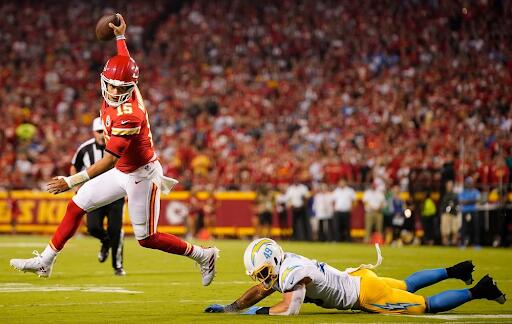 The Kansas City Chiefs took a big step towards winning their 7th straight AFC west title by winning a gritty hard-fought game vs not only their division rival, but one many people have to overthrow the Chiefs for kings of the division in the Los Angeles Chargers and wanted to give a few observations I came to after the game.

The defense will be top 10 by end of the season 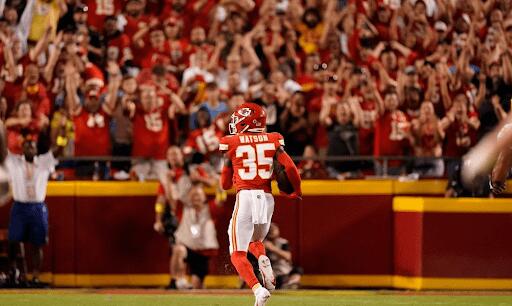 If you look at the final box score you might think the defense is the same old defense that has frustrated fans but if you take away the garbage time touchdown they held one of the top 3 quarterbacks and offenses in the league to 17 points. While they still have areas of improvement like tackling I see that it is due more to over-pursuing which can be fixed but they are flying to the ball and I will take that vs the defense being completely out of position. These rookies and young veterans will get more experience and by season’s end could be in prime position to be one of the league’s best. 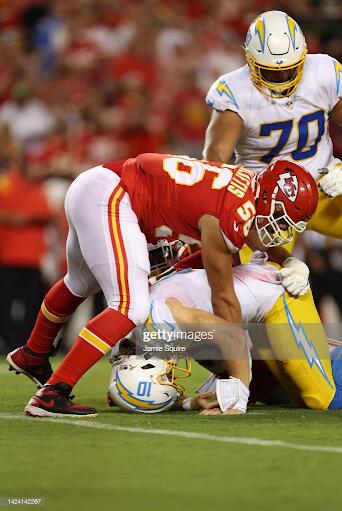 Even though he hasn’t got his first Career Sack, Karlaftis is a disruptor and blows up many plays. His motor can not be denied and with every game, you see improvement with his pass rush moves and shedding blockers, and if Spags is willing to give him more of a role I believe that he will win the Rookie of the year.

The Chiefs need to find a long-term solution at RT 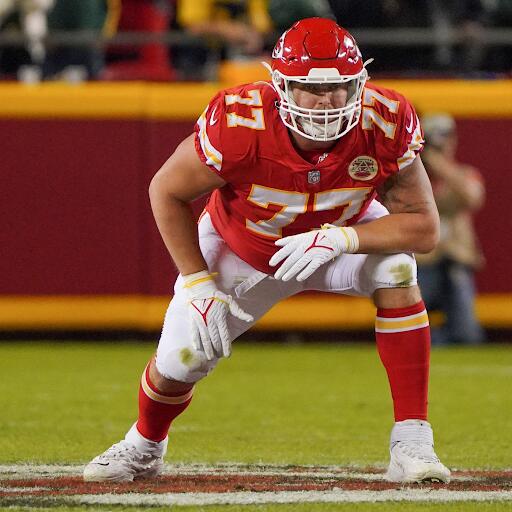 There is no secret that the weak link on the offensive line is the right tackle, while Wylie is fine as the bandaid but last night’s game shows the chiefs need to find a better solution. Now going up against the chargers’ pass rush is no easy task and for the most part, Wylie did well and will be fine for the most part can hold up while looking for the long-term solution but this can’t be it.

Clyde Edwards Helaire Doubters need to sit down and be quiet

I’ll be honest CEH hasn’t lived up to what we all thought he would be and I was all on board the trade-him-out train but after back-to-back solid performances, I firmly believe that Cylde Edwards Helaire doubters need to sit down. I still think he needs to improve on short-yard and goal-line situations but he is improving with each week and becoming a key piece to this offense.

Justin Watson might become WR2 by end of the season 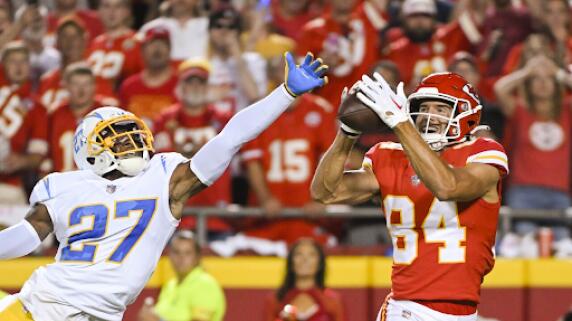 Now this one might be an overreaction to the game but the majority of the night the offense struggled to be a vertical threat with a combination of play calling and the stingy Chargers defense, then Watson comes in on a critical 3rd down, and not only did he get the touchdown but completely beat the 82 million dollar man the chargers brought in to specifically have to beat the chiefs, you love to see it. This will lead to Watson getting more opportunities on the field and his chemistry with Mahomes will lead him to become one of his top targets.

What are some of your quick observations about the game, where can the chiefs improve? What did you think they did well? Be sure to let us know.

Sunday’s 20-17 loss to the Indianapolis Colts wasn’t all that surprising. It’s clear the Kansas City Chiefs came into this game, showing little regard for their opponent. The defense, except for Chris Jones’ choice words to Matt Ryan late in the game, is a legit Top 12 unit. However, it’s the offense that’s struggling, which can be attributed to either a lack, of respect or understanding of who is actually running the offense.

Is Eric Bieniemy on the Move?

The Kansas City Chiefs are 2-0 and they get ready to face off against the Indianapolis Colts tomorrow. It appears from our insiders that the club is preparing for life after offensive coordinator Eric Bieniemy.

The Chiefs have a history against the Colts Defense.

The Kansas City Chiefs have dominated Indianapolis Colts defensive Coordinator Gus Bradley. Coming off of a Thursday night game against the LA Chargers the Chiefs need to make sure that they don’t fall into a trap game against a team that has underperformed.

Could the Chiefs put Colts HC on Hot Seat?

Is Frank Reich’s job in jeopardy with a loss on Sunday?. It is fantastic to have the Chargers game in the rear-view mirror, but another quality opponent awaits in the Indianapolis Colts. The Colts are off to a disappointing 0-1-1 start. Needing a 17-point rally to tie the Texans in a 20-20 finish in week one, and a shellacking of 24-0 by the Jaguars, the Colts are in desperation mode. Sadly, for them, the Chiefs roll into town for their home opener.

Here are my fact-based takes on the AFC West after the first 2 weeks!. With the exception of a doubleheader for Monday Night Football, week 2 of the NFL season has come to a close. Over the offseason, the AFC West has become one of the most controversial divisions and these matchups were highly anticipated. It was unknown how the season would play out and many expected it to be the most competitive division in football. It surely has been interesting, however, it has not been as competitive as expected(yet anyways). After beating the Chargers on TNF, the Chiefs are undefeated and lead the division. The Los Angeles Chargers fall into second with a record of 1-1.

Do both Super Bowl LVI participants have a Super Bowl hangover?. We are seven months removed from Super Bowl LVI which resulted in the Rams capturing their 2nd Super Bowl and the Bengals failing to capture their first. After the first week, both teams struggled out of the gate.

The Kansas City Chiefs came back to beat the Los Angeles Chargers in dramatic fashion, 27-24. There were players that stood out, especially with the snaps played and the significance of that their reps. I will list the winners and losers of week 2 for the Chiefs.

After a convincing beat down against the Arizona Cardinals on Sunday, the Kansas City Chiefs play their regular season opener at Arrowhead against division rival, Los Angeles (San Diego) Chargers. The atmosphere should be electric, but I hope the memory of the late, Len Dawson, sets the tone for another Super Bowl Title for Kansas City.

The Chiefs have an important divisional game tonight

This is a big game for both the Chargers and the Chiefs. After the first week it is clear these are the two top dogs of the AFC west and if the division comes down to tiebreakers later in the year this win could define the division winner.

The Kansas City Chiefs need to answer some questions, against the Cardinals, in week one. (The Chiefs need to make sure that they do not look past this opponent.) While the Cardinals are a team weakened by injuries and suspensions, they still play a big offense due to the speed at quarterback and wide receiver.

How We Can Keep Our Emotions in Check: A Chiefs Fan’s Survival Guide

Chiefs Focus News And More. It’s astonishing just how much sports mean to all of us. It really shouldn’t though. A sports game outcome directly impacts our lives in no way shape or form. But as Chiefs fans, we know the outcome of a game can have a major impact on our overall mood, attitude, and general well-being for at least 48 hours. Sometimes sadly for much longer.

Super Bowl or Bust for Chiefs

Eight months ago, the Kansas City Chiefs suffered a demoralizing defeat to the Cincinnati Bengals at Arrowhead. It was a game that adequately summed up the good and bad of the 2022 season, and it exposed glaring holes that needed to be addressed in the off-season.

The Chiefs take on the Arizona Cardinals in week 1 at StateFarm Stadium at 3:25. A big game for both teams to begin the season will set the tone for the rest of the year. The game will be streamed on CBS on 9/11. Chiefs fans won’t want to miss this one as the Cardinals present a tough challenge to open the season.

See what Darrion had to say about his father's legacy, the team this year, and more!. This past week, JP and I had the opportunity to sit down with the son of Chiefs legend Derrick Thomas, Derrion. While on the podcast, Derrion and JP reminisced on old stories, we discussed Derrick’s legacy both on and off the field, we talked about how the Chiefs are looking heading into this season. The podcast can be found here: A special show with an old friend.

Is Sack Nation Back?

With the Kansas City Chiefs set to begin the regular season soon Next Sunday in Arizona, we preview the team’s defensive linemen outlook for 2022. The Kansas City Chiefs boast one of their deepest defensive line rotations since the Marty Schottenheimer championship contending seasons with Derrick Thomas. After finishing 2021 with the fourth-fewest sacks in the NFL with 31, Chiefs general manager Brett Veach made it clear in the offseason expressing a need for help in the defensive line unit so they can be a dominant force, and that’s exactly what the team would get when he first hired former Ravens Defensive line coach Joe Cullen.

Jarrod Thurman @JarrodChiefsFCS Chiefs Focus @ChiefsFocus. The 2022 season is almost here. Teams named their 53-man rosters on Tuesday, practice squads have been built, fantasy drafts are being done, and coaches are implementing game plans for week 1 opponents. Here I will make some predictions for the 2022 season.