5 Things to Know About Skyy Moore

Will Skyy Moore make the 53?

With the 54th pick in the 2022 NFL draft the Chiefs selected Skyy Moore, wide receiver out of Western Michigan. There was no secret that the Chiefs loved what they saw out of Skyy Moore as many insiders reported that they were willing to select him with one of their first round picks. Luckily they were still able to snag him in the middle of the second round after a trade back with the New England Patriots.

Skyy was also a three year starter at Western Michigan putting up 800 yards at almost 16 yards per reception as a freshman. In his short three years in college he averaged one of the highest yards per reception in college football. After his covid shortened season where he was still able to put up 388 yards in 5 games, he was on every scouts radar after his junior season where he posted almost 1,300 yards at 14 yards a reception. 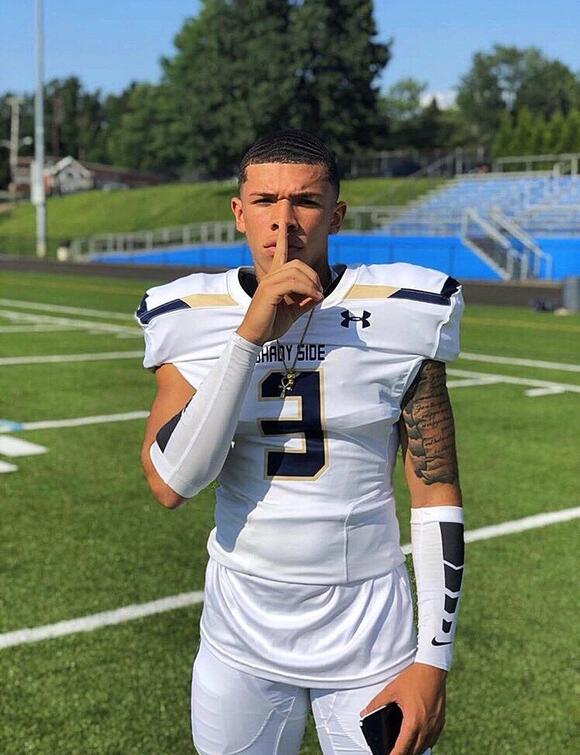 With the additions of MVS, and JuJu, Skyy will have to turn heads in training camp to get the numbers some fans are expecting of him. It is important to note that unless there is a position change Skyy will most likely be behind JuJu in the slot. Anything can happen and injuries are certainly a factor but the Chiefs will look for flashes of what they saw from him at Western Michigan before they rely on him in the starting offense. With JuJu on a one year deal, Skyy may be looking at next year to make a larger impact. Look for him to have around 500 yards and a few touchdowns while he learns the offense this year.

Skyy is the Limit!!

Why Skyy Moore Could Be the Biggest WR Steal of the 2022 NFL Draft?. The Chiefs rookie receiver has already shown he’s ready to make an instant impact!. @ChiefsFan4Lyfe www.chiefsfocus.com Chiefs @Chiefsfocus.

No Tyreek, No Problem

The Chief’s offense still looks like a well-oiled machine in the post-Hill Era. The Kansas City Chiefs played in their first game in the post-hill era in Kansas City and Mahomes and company have quite a lot of doubters as the offense looked as smooth as ever in the preseason opener vs the bears. The starters only played one drive but that was all that was needed to show this offense is still one of the league’s best even with losing one of the league’s most dynamic play makers.

Breaking down the 2 chiefs receivers who are free agents after the 2022 season and who are more likely to stay in Kansas City. The chiefs will enter the 2022 season with a loaded receiving core a problem any team would love to have so we will look ahead to 2023 where two of the top three receivers are due to be free agents with Mecole Hardman in the final year of his rookie contract and Juju Smith-Shuster on a one year deal.

Why it’s time for Chiefs Kingdom to forgive the Hall of Famer. Jarrod Thurman @JarrodChiefsFCS Chiefs Focus @ChiefsFocus. Tony Gonzalez. Depending on the Chiefs fan, that name will either irritate you or make you smile, but why is that? He spent 12 seasons in Kansas City and some Chiefs fans hate him.

The Chiefs Running Back Trade Rumors.

Should the Chiefs consider reunion with Kareem Hunt?. The Chiefs really don’t need much help on offense, but that won’t keep Brett Veach from making the team that much better before the 53-man roster deadline. Isiah Pacheco, A seventh-round rookie has been turning heads at Kansas City Chiefs training camp so far. He has flashed throughout camp, earning an increasing number of opportunities working with Patrick Mahomes and the first-team offense.

Quentin Morris @quentincmorris Chiefs Focus @Chiefsfocus. Pre-season is about filling the final spots on the roster. Many starting players will see little to no game time. Here are a few players to watch how many snaps they get and how productive they are with their snaps.

Early surprise cut predictions and sleepers to make the team

@OriginalMrDietz @ChiefsFan4Lyfe www.chiefsfocus.com. Before we even have a pre-season game, let us see what the staff writers are thinking as to who is in and who could be out.

Breaking down what a Mount Rushmore for the Kansas City Chiefs would look like. Derrik Larsh @dlarsh15Chiefs Focus @Chiefsfocus www.chiefsfocus.com. The biggest topic of discussion for any sports fan for their team and in general, who is on your Mount Rushmore? Most people put their favorite players but to do it right you wanna put a combination of past and present who have made the greatest impact on the franchise, there is no wrong answer to who you will have on Mount Rushmore and hopefully, this will encapsulate all of chiefs Kingdom.

The Chiefs Offensive Line is the Best in the NFL

ESPN just released their Offensive Line rankings, and of course, the Chiefs are right where we think they would be. Number 1 baby! None of us had any doubt, right? None of us were concerned about our traded for but not yet signed to a long-term contract Left Tackle, or our seemingly revolving door at Right Tackle. The least of our concerns were the two rookies manning the middle of the line. Nah, no worries. Well, let me break down each line position and explain why I think we have the best Hog Mollys in the NFL and we will only get better.

Which Chiefs players should we target in our Fantasy drafts?. In the world of Fantasy Football, stats are king. Wins and losses for the teams mean less, but did you put up stats?! With training camp well underway, and preseason starting, it’s time for serious fantasy players to evaluate who they think will make them a champion. We all know the players that will show our year-in and year-out, Travis Kelce, Patrick Mahomes, and Harrison Butker. But what about the unknowns, the maybes? Who are the undervalued fantasy stars on this year’s Chiefs team?

The Chiefs rookie running back has looked plenty athletic and shifty in camp. He’s already in the RB1/2 conversation. The Kansas City Chiefs made 10 picks during the 2022 NFL draft and have signed several other contributors during college free agency, adding an influx of first-year talent to the roster. The Rutgers running back Isiah Pacheco was a 3-year starter who led the Scarlet Knights in rushing in each of the last 3 seasons but wasn’t selected until the 7th round of the 2022 NFL Draft by the Chiefs. Despite that, Pacheco fell into a great position with coach Andy Reid and already he’s showing the Kingdom why the Chiefs had great faith in drafting him and his outlook could be similar to Elijah Mitchell who wasn’t selected until the 6th round of 2021 NFL Draft by the 49ers and had an immediate impact as a rookie. I will show what Pacheco brings to the Chiefs and how he fits for the 2022 squad.

Breaking down how Alex Smith put Kansas City in a prime position to be the next dynasty. When you think of former Chiefs Quarterback Alex Smith what comes to mind? The most common is Game Manager, the guy who was great in the regular season but could never get over the hump in the postseason. What if I was to tell you he can be described as a building block, who put this team in a fantastic position to allow his team to succeed for years after his departure?

Dick Vermeil a coach for Canton

Where Does Andy Reid Rank All Time Among Coaches?

See how Big Red’s coaching resume has become one of the best in NFL history. Chiefs head coach Andy Reid is regarded as one of the league's best coaches. As he should be, he has the 2nd most wins among active head coaches only behind Bill Belichick. While it is obvious he is great today, many people fail to realize that Big Red is actually one of the best coaches in NFL history. In his 23 years as a head coach, Reid has a 0.633 win percentage with the 5th most wins among all time coaches. Not to mention, thus far he has averaged a significant more amount of wins per season than those ahead of him. Below is a list of the coaches with more wins than Reid and how many wins per season they averaged throughout their career.

Will Isiah Pacheco Be RB2?

Early reports out of training camp have been all about how good Isiah Pacheco looks. Maybe it’s the number 10 jersey but from what I saw at training camp he looked to be the most explosive running back on the roster. This is not a hot take either, Pacheco ran a 4.37 40 yard dash at the combine which would make him our fastest running back.

LRP of the O-Line and D-Line

Least Replaceable Player on each side of the line?. Well, one week into camp and so far, no major injuries have been reported or seen by fans. That is a good thing! Patrick Mahomes got his foot stepped on, and Jody Fortson has a quad issue that appears to be minor. Mecole Hardman is still fast, Skyy Moore has large hands, Travis Kelce runs like he’s 25, and Orlando Brown took his first reps.

We transition from our Bacon, Egg, and Chiefs Sunday brunch periodical to bring you the training camp edition of our Sunday preseason offerings – The Sunday Scaries. My wife and I were given a “dinner journal” for Christmas this past year, and when we opened it I thought “Well we’ll do this for a few weeks then it will sit on or near the dinner table.” As a veteran bachelor (met my wife at 31, engaged at 32, married at 34) these types of items were things that never even really existed in my brain, and certainly not my reality. And while they’ve been steadily introduced into my life over the last 3 years, the subconscious bachelor mindset resurfaces from time to time, it’s and inevitable thing for all men.

Who will be the next Patrick Mahomes?

Patrick Mahomes Lamar Jackson Kyler Murrysporting news. Before I get started, I want to make it clear that I don't think the player's I list on this will equal Patrick Mahomes accomplishments. What I mean by this article is these are the players that I think are set up to have success early in their careers including winning lots of games, playoff wins, and Pro Bowls. My requirements for this are the player has to be a rookie or they have to have been a starter for either one or two seasons.

Ex-Bengals and Seahawks DE Carlos Dunlap Agrees to 1-Year, $8M Chiefs Contract. Carlos Dunlap will be the newest member of Sack Nation after officially agreeing a deal with the Chiefs on Thursday.