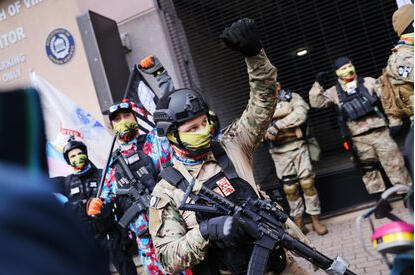 Members of the "boogaloo boys" join other gun rights advocates in front of the State House as pro-gun supporters gather on January 18, 2021.(Spencer Platt/Getty Images)

A Maryland man who was part of an anti-government radical movement was sentenced this past Thursday to six months of home confinement for the illegal possession of a firearm.

Frank William Perry, 39, acknowledged following the “boogaloo,” a concept embraced by a loose network of gun enthusiasts and militia-style extremists. The term was derived from an ’80s movie sequel called “Breakin’ 2: Electric Boogaloo,” and is slang for a second civil war or collapse of the U.S. government.

Perry pleaded guilty in March to a gun charge that carries a maximum sentence of 10 years in prison. Prosecutors weren’t seeking a sentence stiffer than the one month he already spent in jail after his arrest. U.S. District Judge Catherine Blake also sentenced him to three years of supervised release.

I hurt my children and my family with my actions. I was raised better than that,” Perry commented in the Baltimore courtroom, apologizing to the judge, his fiancée, and his young children. Perry said he had been worried for his family’s safety and “took the wrong route” to protect them.

Blake said it was a serious offense, but agreed not to incarcerate him, noting that as a truck driver he needed to support his family. He’ll need a probation officer’s permission to leave the state. “It’s better to keep him employed and maintain his family responsibilities,” Blake added.

One of Perry’s lawyers, Brendan Hurson, asserted that Perry had left his extremist ideology “in the rear view mirror.”

FBI agents seized a rifle, ammunition, a black tactical vest containing two ballistic plates and other gun accessories when they searched his Dundalk home in October 2020. Perry had a 2002 burglary conviction that made it illegal for him to possess a firearm.

In April 2020, Perry had his girlfriend buy the lower receiver of a rifle at a Baltimore County gun shop. Perry purchased other gun components from Amazon last year to build a complete weapon, having the parts shipped to his home in his girlfriend’s name.

Perry told FBI agents that his fiancée decided to purchase the firearm for self-defense because he often traveled for work. She told the agents she was not involved in the assembling of the rifle but that a neighbor had helped Perry build it. She also added that she had seen Perry wearing body armor with the rifle slung around his neck while he washed dishes.

Perry insisted that it was his girlfriend’s weapon, but conceded that the FBI would probably find his fingerprints on it,” a court filing [that accompanied Perry’s guilty plea] explained. “Perry also admitted that he would have used the weapon himself for self-defense if put in a position that it was necessary.” 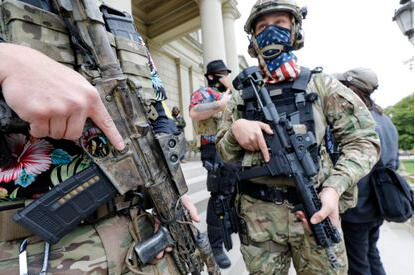 A group tied to the Boogaloo Bois holds a rally as they carry firearms at the Michigan State Capitol in Lansing, Michigan on Oct. 17, 2020.(JEFF KOWALSKY/AFP via Getty Images)

The boogaloo movement has grown beyond its origins as an internet meme on edgy social media sites. Gun-toting “boogaloo bois,” some wearing body armor over Hawaiian shirts, have often attended protests against COVID-9 lockdown orders. The shirts are a nod to “big luau,” a derivation of the movement’s name.

Federal authorities have warned of possible bloodshed inspired by the boogaloo ideology and linked the movement to a string of murders and violent plots.

An Air Force sergeant tied to the boogaloo movement is accused of fatally shooting a federal security officer outside a federal building in Oakland, California, and killing a Santa Cruz County sheriff’s deputy during a span of eight days last year.

Boogaloo supporters were galvanized by the death of Duncan Lemp, a Maryland man who was fatally shot by a police officer during a predawn, no-knock raid on his family’s home.

Three Nevada men with ties to the boogaloo movement were arrested last year on charges they planned to spark violence during protests in Las Vegas.

An Arkansas man whose Facebook page included “boogaloo” references was arrested in April 2020 by police in Texarkana, Texas, on a charge he threatened to ambush and kill a police officer on a Facebook Live video.

In March 2020, a Missouri man suspected of planning to bomb a hospital in the Kansas City area in what he called “operation boogaloo” was shot and killed when FBI agents tried to arrest him.

This week, a self-proclaimed boogaloo member in Minnesota who allegedly planned to “defend” a January rally at that state’s Capitol pleaded guilty to illegally possessing a machine gun.

In another case, a Minnesota man and a North Carolina man pleaded guilty to conspiracy to provide support to a foreign terrorist organization. Prosecutors said the two delivered firearm components to an undercover FBI agent — who they believed was with the group Hamas — to make money for the boogaloo movement. Authorities say the two took advantage of unrest in Minneapolis after the killing of George Floyd and spoke about destroying government buildings and killing politicians.