Tristan Thompson recently returned to the Celtics’ lineup as he’s been in the NBA Health & Safety Protocols for the last few weeks. A few weeks back, Kevin O’Connor of ‘The Ringer’ reported that Thompson wasn’t well liked within the Celtics’ locker room. Thompson called out O’Connor by saying “he doesn’t deserve my two cents” and said “that’s not the case” when it comes to him being a bad teammate. Hosts Chase Senior and Harrison Graham weigh in on this beef between O’Connor and Thompson. 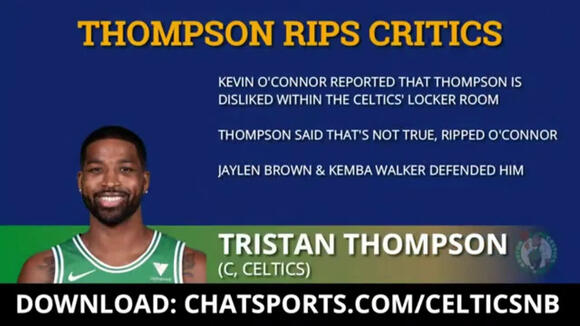 Boston Celtics News: Three 2021 NBA Draft Prospects The Celtics Could Look Into In the First Round

VIDEO - Boston Celtics: We’re not sure where the Boston Celtics will be selecting in the 2021 NBA Draft, but we do know they’ll be in need of some playmakers. On Celtics Today by Chat Sports, host Chase Senior looks at three prospects the Celtics could target in the first round. The list includes Ziaire Williams of Stanford, Jaden Springer of Tennessee and Cameron Thomas of LSU. Each prospect possesses different strengths to their games.

Boston Celtics News: Are The Celtics Running Out Of Time To Get It Together Before The Playoffs?

WATCH: Consistency has been a problem all year for the Celtics. Part of that is because of injuries and COVID issues, but also because Boston has struggled to find any continuity as a unit. Without Jayson Tatum & Kemba Walker, the Celtics suffered arguably their worst loss of the year against the Oklahoma City Thunder. The win snapped the Thunder’s 14 game losing streak. Is Boston running out of time to get it together before the playoffs? Chase Senior dives into that on Celtics Today by Chat Sports.

Boston Celtics point guard Kemba Walker injured his side in Sunday’s loss to the Charlotte Hornets. While Walker returned to the game, he told the media after the game that he was in a significant amount of pain. Walker has been up and down this year, but has started to play better of late, which is why it would be a big loss if he missed any extended amount of time. Chase Senior discusses the importance of Kemba Walker’s presence in the Celtics lineup on Celtics Today by Chat Sports.

The Boston Celtics visit the Brooklyn Nets this evening and top NBA Trade Deadline acquisition Evan Fournier is available to return. Fournier has missed the past 9 games in the NBA health & safety protocols with COVID-19. Boston is starting to hit its stride with 7 wins during that time and now Fournier can add some scoring production. Celtics Today by Chat Sports host Chase Senior breaks down the latest with Fournier and his potential impact for Boston.

Boston Celtics: Can Jabari Parker Be A Long-Term Bench Option For The Celtics?

The Boston Celtics made an under the radar signing on Friday night by signing free agent forward Jabari Parker. While Parker has never turned into the prospect many thought he’d be after getting selected no. 2 overall out of Duke, he has shown flashes of being a solid bench piece in two games with the Celtics so far. Chat Sports host Chase Senior looks at how the Celtics have used him and how he may figure into the Celtics’ plans on this episode of Celtics Today.

Boston Celtics head coach Brad Stevens has had a lot of success at the NBA level, but that hasn’t stopped him from being a rumored candidate for some of the top college coaching jobs, including Indiana and North Carolina. This coming after Stevens helped lead Butler to back-to-back Final Fours several years ago. According to Adrian Wojnarowski of ESPN, Indiana was ready to offer Stevens a 7-year, $70 million contract. Chat Sports host Chase Senior breaks it down on Celtics Today.

The 2021 NBA Draft will be held in July, but it’s never too early to start looking ahead. If NBA teams are already starting the player evaluation process, so can Chat Sports! Host Chase Senior takes a look at four prospects that could be in play when the Celtics draft in the first round. The list ans scouting profiles include Illinois point guard Ayo Dosunmu, Auburn point guard Sharife Cooper, and Texas big men Greg Brown and Kai Jones.

The Celtics made a big move at the 2021 NBA Trade Deadline by acquiring Evan Fournier from the Orlando Magic. Fournier was starting to round into form and find his groove before testing positive for COVID-19. Fournier has missed the last several games after being put in the NBA’s health and safety protocols on April 6. President of basketball operations Danny Ainge announced Fournier’s condition is improving. Chase Senior and Harrison Graham of Chat Sports break it down on NBA Now.

Boston Celtics star player Jayson Tatum has been playing like an MVP of late, helping the Celtics find their footing and climb the playoff standings. He was just named the Eastern Conference Player of the Week. That’s why it’s hard to believe that Tatum is still dealing with the after effects of battling the coronavirus. He detailed his ongoing struggle, which includes him having to use an inhaler before every game. Chat Sports host Chase Senior discusses this on this episode of Celtics Today.

What the Celtics decide to do this offseason will come down to how they perform in the 2021 NBA playoffs. If Boston has an early exit, they could look to make roster upgrades. Will that include trying to trade away guard Kemba Walker? Bleacher Report put together a trade idea that would send Walker and Tristan Thompson to the Clippers for Patrick Beverly, Luke Kennard and Ivica Zubac. Would you make that trade? Chase Senior explores that potential deal on Celtics Today by Chat Sports.

The Boston Celtics Have Been Criticized For Their Mediocre Play, But Are They Starting To Get Hot?

VIDEO - The Celtics entered the season with lofty expectations after making it to the Eastern Conference Finals last year, but last year’s success hasn’t carried over to this year. Boston has hovered around .500 all year, but are they starting to turn the corner? The Celtics are 5-1 in their last six games and Jayson Tatum has been putting the team on his back, averaging 29 points per game during that span. Chat Sports Host Chase Senior breaks it down on Celtics Today.

Video - It’s mock draft season in the NBA! ESPN released its first post-NCAA Tournament NBA Mock Draft and has the Celtics taking a playmaking guard out of Auburn. Sharife Cooper is pegged to go to the Celtics at #19 overall. Cooper averaged more than 20 points per game this season and scouts rave about his ball handling skills. What do you think of Cooper going to Boston? Comment and let us know. Chat Sports host Chase Senior discusses Cooper’s skill set on Celtics Today by Chat Sports.

(WATCH) Boston Celtics News focuses on Evan Fournier as the newest member of the Celtics remains in the NBA health & safety protocols. Fournier has missed Boston’s past 2 games and is expected to miss the next couple of games as well. When can the Celtics expect to get Fournier back? Celtics Today by Chat Sports hosts Harrison Graham and Chase Senior provide and update on Fournier on today’s video. Get in the comments and let us know if Fournier should start or come off the bench once he’s back.

WATCH: Sitting at 26-26, the Celtics have underperformed this season and have failed to reach loft expectations after making it to the Eastern Conference Finals last season. A big loss to the 76ers prompted star players Jayson Tatum and Jaylen Brown to have a serious talk before the Celtics beat the New York Knicks on Wednesday night. Brad Stevens labeled it as one of the team’s best wins of the season. Chat Sports host Chase Senior discusses the meeting on Celtics Today by Chat Sports.

WATCH: Listing The Super Star Players The Boston Celtics Have Nearly Traded For Going Back To 2005

Boston Celtics president of basketball operations, Danny Ainge has been under the microscope of late after failing to upgrade the roster at the NBA Trade Deadline. The Celtics were rumored to be in on several big name players, but no splashes were made. This has been a consistent theme for the Celtics going back to 2005, as they’ve been tied to several star players over the years, but haven’t pulled the trigger. Chat Sports Host Chase Senior takes a look at those big names on the Celtics Today.

WATCH: The Boston Celtics Will Be Short Handed Against The Philadelphia 76ers

The Boston Celtics have a big matchup coming up tonight against the Philadelphia 76ers and they will be without Evan Fournier and Tristan Thompson. Fournier, who was acquired by the Celtics leading up to the NBA Trade Deadline from the Orlando Magic is out due to health and safety protocols. Thompson is out for the same reason, but is working his way back. Semi Ojeleye is set to make his return to the lineup to give the Celtics some depth and size.

Legendary University of North Carolina head coach Roy Williams retired yesterday and Celtics coach Brad Stevens has emerged as a rumored candidate to take his position. Stevens is garnering interest because of what he did with the Butler Bulldogs in the college ranks, coaching them to back-to-back Final Four’s in 2010 and 2011. Chase Senior breaks it all down on Celtics Today by Chat Sports.

VIDEO: Kemba Walker is having a down season with the Celtics, as his scoring and shooting percentages have dropped across the board. Boston was rumored to have shopped the All-Star point guard last offseason, and a former executive thinks he will get dealt after this season. Should the Celtics move their point guard? What kind of value would he get on the trade market? Thomas Mott from Celtics Today by Chat Sports breaks down all the details in this video!

Celtics trade rumors fizzled out following last week’s NBA Trade Deadline. However, recent news out of Minnesota suggests that Karl Anthony-Towns could be on the move in 2022. Boston has struggled recently and are sliding in the East, and their need for a big continues to be exposed. Could the Celtics be interested in landing KAT in a trade after this season? Chat Sports host Thomas Mott has more in this episode of Celtics Today on News Break.