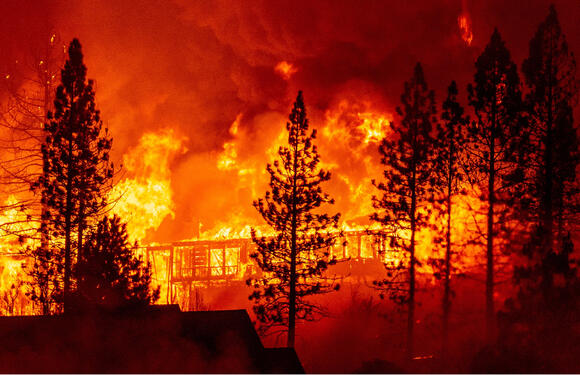 Relevance: According to experts, climate change has made the US West warmer and drier in the last 30 years and will continue to make weather more intense and wildfires more catastrophic.

Zoom in: Two weeks after the Dixie Fire burned much of the Gold Rush-era town of Greenville, a few miles southeast, the Caldor Fire erupted through tinder-dry woods and decimated Grizzly Flats, a forest settlement of about 1,200 people.

Behind the scenes: From Monday afternoon to Tuesday, both fires expanded by tens of thousands of acres, torching trees and burning up vegetation left tinder-dry by high temperatures, low humidity, and dryness. The flames were propelled by afternoon breezes. In Grizzly Flats, where roadways were strewn with downed power wires and poles, few homes were intact.

Power shut off: For the first time since last year's exceptionally disastrous fire season, Pacific Gas & Electric has begun turning off the electricity to up to 51,000 customers in 18 Northern California counties to avoid wildfires.

Flashback: The Dixie Fire began near the town of Paradise, which was devastated by a 2018 wildfire ignited by PG&E equipment during strong winds. Eighty-five people died. The Dixie Fire is the largest of nearly 100 major wildfires burning across a dozen Western states, including Alaska.

The Success of Electric Vehicles Hinges on Batteries

Electric vehicles (EVs) currently make up just 1% of the global automobile market, but the number is expected to increase rapidly. Within four years, analysts predict that one in four cars in china and 40% of those in Germany will be electric. In the US., as in other countries, sales of EVs have soared in 2021, breaking records even during a global chip shortage and ongoing supply issues. Experts expect up to 230 million EVsin use globally by the end of the decade, accounting for 12% of all cars.