Specializing in the best of Los Angeles! I want to show you how to eat, drink, and live your best Los Angeles every day of the week. My favorite style of articles to share are listicles and "best of" roundups.

6 National Taco Day Deals you will be Taco-ing About

This Tuesday, October 4th, the entire nation is finally getting on board with what Los Angeles has been doing on a daily basis: CELEBRATING TACOS! Best of all it's National Taco Day plus Taco Tuesday so things here are extra sabroso!

Enjoy Loteria Taco Tuesday at El Granjero Cantina, where from 6 to 8 p.m. you can enjoy a game a chance while chowing down on $10 Taco Specials, $10 Frozen Margaritas, and more! 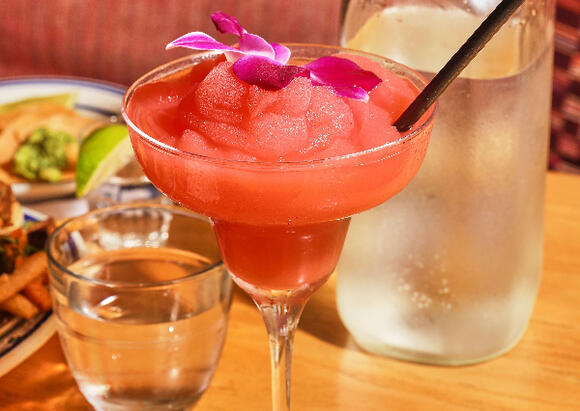 Not only are Tacos $3, but Margaritas are $3 too! This special will be available at the Culver City and West 3rd locations only. 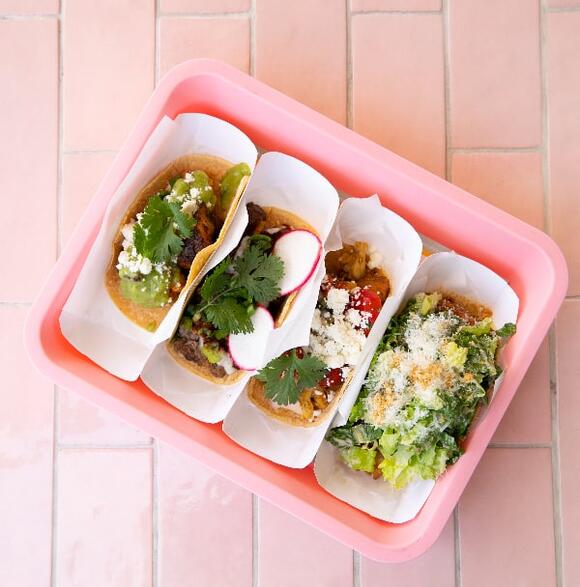 Just remember the number five when you visit Qué Padre Tacos. From 3 to 5 p.m. you can enjoy all the Signature Tacos on Chef Isaias's menu for just $5, as well as $5 Beers. 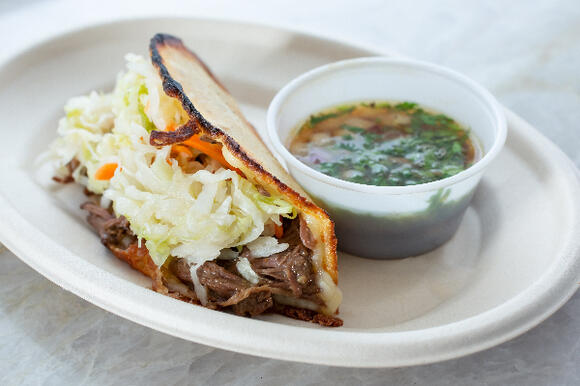 Acapulco will be offering the first taco FREE when you say "Taco Day" to your server. This begins at 3 p.m. when they also start serving their $3 Taco and Drink Specials until close in the Cantina for Taco Tuesday. El Torito has a similar Happy Hour at 3 p.m. with $4 Margaritas, Live music, and a $3 Build your Own Taco Bar. 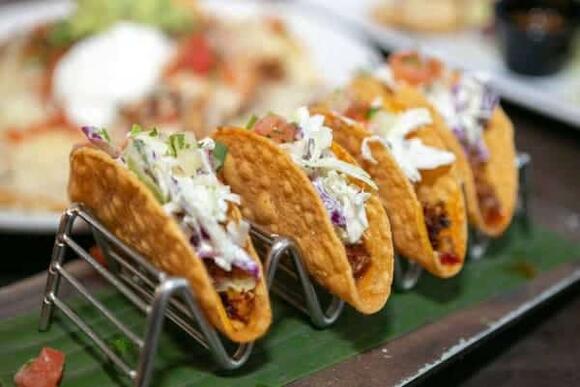 Enjoy seven different taco specials when you participate in the 1st annual Santa Monica Taco Crawl, hosted by Trejo's Tacos and Downtown Santa Monica. Begin the crawl at Trejo's Tacos at 4 p.m. where you can meet Danny Trejo and pick up your punch card. Participating restaurants like Tocaya, Cabo Cantina, and even Jameson's Pub will have FREE-ish Taco Deals and Drink Specials (a purchase is necessary to get your freebie). 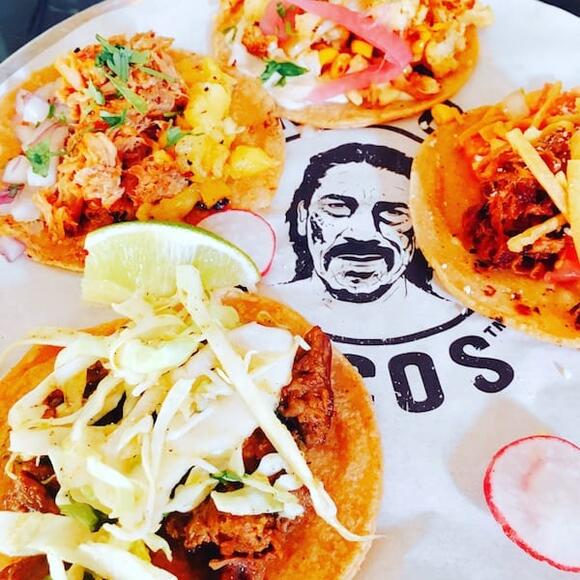 Specializing in the best of Los Angeles! I want to show you how to eat, drink, and live your best Los Angeles every day of the week. My favorite style of articles to share are listicles and "best of" roundups.

More from Caroline at EatDrinkLA

The list of Michelin Starred restaurants for Los Angeles is officially out! While each year appears to be a little less shiny than the last, you'll see some new brilliance in the one-star category and some maintenance for the two-stars. The real winners can be found in the Bib Gourmand category with nine new additions of affordable luxury that represent more diversity than seen from the starred restaurants.

25 Things you have to do in December in Los Angeles

It's the holiday season, and the city of angels is quickly becoming the city of lights. No matter how you celebrate, it's impossible to avoid the holiday spirit - so you might as well let it move you. Here are 25 things to do in December in Los Angeles.

The FIFA World Cup Qatar is in full swing until December 18th, 2022. Here's where to watch the World Cup in Los Angeles based on the country you're supporting. Tapizôn in the South Bay in your headquarters for all things Copa do Mundo. While you can enjoy all the games with them, it's the Brazil matches that will have that extra special something. Join them Friday, December 2nd at 11 a.m. for a taste of that spirit - and I'm not just talking about Caipirinhas.

It's that time of year again, and the Los Angeles Foodie Holiday Gift Guide is here to help you fulfill your wildest gifting dreams! Select your gift below based on the type of foodie you are shopping for.

A One-of-a-Kind Gift of Commissioned Art is not as Out of Reach as you Think...

After giving gifts to the same people for decades, one often runs out of ideas. How do you surprise that special someone when you've already done all the personal photo gifts and scrapbooks you can think of? In an era where we all get the things we want, the second we want it anyway, how are we supposed to shop for people anymore? If you're looking for a truly unique and thoughtful present for someone, I'm here to tell you that a one-of-a-kind gift of commissioned art might be just what you're looking for, and you don't have to have Medici money to do it.

12 Spots to Gobble Up Thanksgiving in Los Angeles

Leave the work to the professionals this Thanksgiving and choose between dine-in and take-out for November 24th. Loews Santa Monica (Santa Monica) Enjoy your turkey by the sea when you choose to dine at Blue Streak Restaurant at the Loews Santa Monica Beach Hotel. The meal will be served family-style and offers traditional Turkey, Cornbread Stuffing, Baked Yams, and more.

As if risking their lives for their country wasn't enough, Veterans extend their goodwill one step further by sharing their day off with the rest of America. Here's everything you need to be doing this Veterans Day Weekend in Los Angeles.

Where to Eat for Free on Veterans Day in Los Angeles

Veterans Day is this Friday, Nov. 11th, 2022, and to thank the brave women and men of this country, many establishments are offering some great deals and free meals. Here's some of the best of the list of where to eat for free on Veterans Day in Los Angeles.

Although the birria craze appears to be going strong, the popularity of chicken sandwiches in Los Angeles hasn't ever been overtaken. These are the best six chicken sandos in the city, including vegan varieties in order of clucking-awesomeness. Plus, for National Chicken Sandwich Day on November 9th, check out the deals after the number 1 spot.

These are the Best New Brunches Right Now in Los Angeles

Nothing brings out the sunshine or the fall feels more than a good brunch! Here are a few fun new spots for Brunch in Los Angeles that are just right for this weekend!!. Only in Los Angeles can one of the hottest restaurants be found in a fitness club. Mother Tongue by Chef Michael Mina is located on the rooftop of HEIMAT, a concept fitness club that combines working out and hanging out. Weekend brunch launches Saturday, November 5th, and will be served from 11 a.m. to 3 p.m. on weekends. All the food is designed with wellness in mind. Brunch highlights include Pacifico Striped Bass Crudo and Whole Grain Griddle Cakes. There are Cold-pressed Juices as well as alcoholic options like a Watermelon Sage Mimosa. The way to optimize this brunch is the 2-course prix-fixe menu for $39.

Generally, I'm about Pumpkin Spice everything, but this fall, my palate is craving something a little less overdone. Think brown sugar, gingersnap, cranberry, and pecan! Get ready to taste the best fall menu items that go way beyond the PSL.

Here are 22 Things to do in November in Los Angeles

The year might be winding down, but the holiday season is just getting started. Here are 17 things to do in November in Los Angeles that will have you wishing the month was longer!

7 Places to Raise the Dead on Dia de los Muertos

Dia de los Muertos, or Day of the Dead, is a Mexican holiday where families can reunite with the souls of relatives that have passed away. According to History.com, the holiday is celebrated each year from October 31st to November 2nd. The Catholic faith adopted November 1st and 2nd as All Saints Day and All Souls Day, respectively. The story goes that, "the gates of heaven are opened at midnight on October 31st for the spirits of children to rejoin their families for 24 hours while spirits of adults can do the same on November 2nd." Dia de los Muertos is meant to be a fun reunion, so in the spirit of gathering with those you love, these L.A. restaurants are serving some special ofrendas.

Free Event: The Art of Champagne

Can you bottle over two and a half centuries of culture into one art show? The Veuve Clicquot Solaire Culture exhibit in Beverly Hills does just that seamlessly, taking you on a journey that goes beyond that signature yellow and goes down as easy as a glass of Champagne. This free exhibition is open to the public starting October 26th, 2022, and features the work of ten female artists, along with priceless memorabilia that chronicles the life of Madame Clicquot and the 250-year-old Veuve Clicquot brand that she helped to build.

10 Scares, Steals, and Foodie Deals for your L.A. Weekend

This weekend in Los Angeles is frightfully delicious. Take advantage of foodie deals, event steals, and scary feels. The most celebrated Banana Pudding in the world is going Vegan, and only in Los Angeles (for now). Magnolia Bakery will be serving a Vegan Pudding at the West Hollywood location from now until October 26th. Try it for yourself this weekend!

Happy Halloween, Los Angeles! Start celebrating now THROUGH October 31st with 20 Halloween ideas happening all over Los Angeles. Available now through Halloween, Primo’s Donuts will have Halloween-themed donuts at both the Westwood Village and Sawtelle locations. The variety includes black and orange donuts with seasonal sprinkles in addition to a line of pumpkin-spice cake donuts.

Here's What to Eat at the Crypto.com Arena

The Crypto.com Arena, formerly Staples Center, is getting a facelift for the first time in twenty-three years and phase one of a three-year project is complete. Fans can expect brand new LED screens and ribbon boards in the arena space, an upgraded Impact Sports Bar & Grill, a gorgeous new Chairman’s Club for season ticket holders and VIPs, and some innovative changes to how the rest of us are going to get our concessions. Here’s what to eat at the Crypto.com Arena for the 2022-2023 season.

Tapizôn is the missing Ingredient in your Dining Life

There are certain restaurants in Los Angeles that you can't help but be happy in - and that's the feeling you'll get as soon as you arrive at Tapizôn Bar and Kitchen. It honestly begins in the parking lot, where a sweeping street mural accompanies your every step on the "jetway" into the restaurant. Located on a charming street in El Segundo, this carefully curated Tropi-Cali Brazilian restaurant will win you over with some tapioca pearls of wisdom and a bossa nova heart.

Happy New Year, Sake!! World Sake Day, or Nihonshu No Hi, was created in 1987 to mark the beginning of the Sake production season as well as celebrate the impact of the beverage on a global scale. It's celebrated on October 9th.

8 Things to do in Los Angeles this Weekend