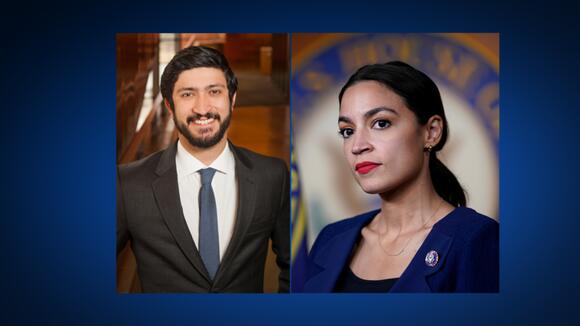 Alexandria Ocasio-Cortez and Greg CasarKXAN photos
Representative Ocasio-Cortez will appear at a rally on Sunday, Feb. 13 in Austin with the Austin Democratic Socialists of America, Sunrise Movement Austin, Sierra Club Lone Star Chapter and Education Austin to push for a "Green New Deal."

She is also touring to promote the candidacy of Greg Casar for Congress, in a district currently held by Lloyd Dogged. Long-time senator Dogged will run in the newly created Congressional District #37.

Casar resigned from the Austin city council in order to run for Congress.

While she is stumping for both Casar and Jessica Cisneros in a San Antonio appearance, and will promote Casar, an Austin native , at the Austin rally, AOC's appearance in Austin, TX is mainly to promote her Green New Deal.

One of the scheduled speakers, Amanda Cavazos Weems, will address the impact of the original New Deal under President Franklin Delano Roosevelt as it relates to Austin and to ecological preservation.

Under the New Deal, Barton Springs Pool was built in the 1930s and continues to be a beacon for ecological sustainability. Barton Springs pool is maintained in its natural environment, and is dedicated to the preservation of species native to the area. Cavazos Weems, a member of the local Austin DSA, before recently becoming an employee of the national organization, worked there as a lifeguard, and was instrumental in starting a union for lifeguards in the city of Austin, TX.

Ocasio-Cortez is also a member of the Democratic Socialists of America, and is one of the youngest members of Congress. She is concerned about climate change and global warming. Her Green New Deal proposal addresses climate change and would put more people to work, as did the original New Deal.