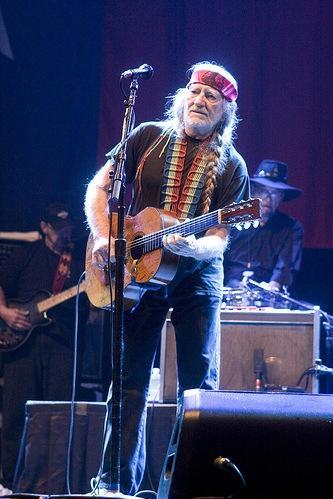 Willie Nelson and Austin, Texas are synonymous. He's lived in Austin since 1972, and we claim him as our own. He was born in Abbot, Texas, and has lived other places, but Austin has had him the longest.

Upon moving to Austin in 1972, Willie performed regularly at the Armadillo World Headquarters. I first heard him perform in the late 1970's and have been a super fan ever since. I even met him once, after a charity concert in Dallas, but missed two other opportunities to hang out backstage with him.Those are two of my biggest life regrets.

No one talks about it, but Willie is in his eighties. We don't talk about it because we believe he is immortal. Still, it's a good idea to catch this concert tour at the Germania Insurance Ampitheater in Austin, TX, or wherever else you can on his 2021 Outlaw tour.

Willie sounded just as good the last time I heard him when he sang onstage with and for Beto O'Rourke when O'Rourke ran for Congress. Willie's signature guitar riffs rang out from the Auditorium Shores on the banks of Lady Bird Lake just as powerfully as the first time I saw him in person at Billy Bob's nearly thirty years ago.

It's fitting that this tour is called the Outlaw Tour. Willie is one of the founders of outlaw country, which he and others such as Kris Krisofferson developed to rebel against the restrictions of the Nashville sound that ruled country music in until the late 1960s. Outlaw country became the most popular as Willie and others climbed the charts.

He's experimented over the years with jazzy, bluesy, rock and roll influences. His voice is rugged and jazzy and his off-beat stylings are iconic.

More than a musician, Willie has used his fame to promote causes he cares about. His first major philanthropic undertaking was Farm Aid started in 1985, and which takes place each year. After Bob Dylan mentioned during the Live Aid Concert that he hoped some of the proceeds could go to farmers to help them keep their land, Willie organized Farm Aid, and Dylan was one of the performers at the first concert.

Willie also supports the environment through Willie Nelson Biodiesels, fuel made from vegetable oil. He is an advocate for the humane treatment of horses and dairy cattle. He is on the board of directors of the Animal Welfare Institute and Habitat for Horses, from whom he's adopted several horses.

Fittingly, he's also on the board of the Texas Music Project, the official music charity of Texas that provides music education to disadvantaged youth and children in hospitals.

Go hear Willie Nelson on this tour. Go for the music, but also to honor this great Texan and resident of Austin. Go because he is an icon in both music and supporting the backbone of America, the farmers. Go because he cares about the environment and animals. Go because he's Willie Nelson, and you can't call yourself a Texan if you haven't heard him in person at a live concert.

Austin's Moody Center is a Multi-functional Space for the Arts

The Moody Center for the Arts' mission is to provide a platform for the exploration of new ideas and to promote a deeper understanding of the role of the arts in society by fostering interdisciplinary collaboration and experimentation. Moody Center is located in Austin, Texas, and housed on the campus of The University of Texas at Austin.

Produced by Live Nation, the 19-city run kicks off on Tuesday, August 1 in Seattle at Climate Pledge Arena, with stops in Austin August. Tickets: Venue presale is Thursday, January 26 from 10AM – 10PM CT, password: ZILKER. Tickets go on sale beginning Friday, January 27th at 10AM CT onMoodyCenterATX.com and Ticketmaster.com. All ticket sales are subject to availability.

IHeartcountry Festival to Return to Moody Center in Austin, TX on May 13, 2023

Hop Doddy burger.Photo byPhoto from Hop Doddy website. I have two favorite restaurants in Austin: Loro and Hop Doddy.While I prefer fine dining when I can get it — as in when someone takes me on a date or it’s my birthday— these two check all the other boxes.

Billboard Magazine Announces Moody Center of Austin, Texas as the "Best in the World of its Size"

Moody Center, Austin TXPhoto byPhoto courtesy of Moody Center. Billboard ranks Austin’s Moody Center is the #1 highest grossing venue in the world within the category of 10,001-15,000-person capacity arenas. Moody Center has surpassed every other national and international venue of its size in gross revenue generated by concert ticket sales.