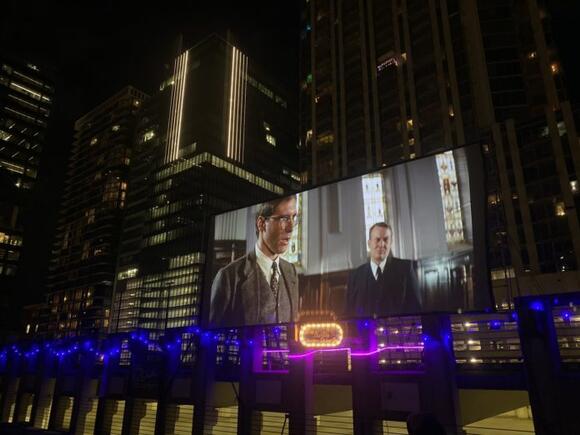 I grew up going to drive-in movies with my parents. I remember the tinny sound from the speakers, never duplicated and so therefore distinctive. We played on a gravel playground before the movie started, and during intermission. Later, as a teen, we sat on the hood to watch the movie, when we weren't making out inside the car.

Drive-in theaters have been making a comeback, especially during COVID. Austin, TX has four Drive-ins, two within the city limits of Austin, and two just outside.

The Blue Starlite downtown rooftop mini-urban drive in is one of a kind. It's located at 300 San Antonio Street on the rooftop of the garage. Watch movies from your car, order food delivery from nearby restaurants and food trucks, and there is table seating in the walk-in cocktail bar. The drive-in is operated in conjunction with the Downtown Austin Alliance Foundation.

Doc's Drive-in Theater in Buda is modeled after the drive-ins of the 1950's and 1960s. The resemblance ends there, however, when you see and experience everything else Doc's Drive-in has to offer. Doc's also boasts Themed Tiny Homes for overnight stays, an onsite restaurant names Doc's Diner, a bar, family entertainment, and a private beach complete with a swimming hole. In keeping with Austin, TX's accepting animal culure, the drive-in also has a mascot dog named Doc, who enjoys guiding guests through the area.

The Globe drive-in in Pflugerville is a 30 car drive-in. Unlike the others, it has an inflatable pop screen on which to project the movies. Drive-in Movie website states that they don't usually list drive-ins using portable screens. However, the Globe has a permanent location, an easy to use website and shows movies weekly, so they are considered a true drive-in. Purists might disagree about the screen.

Wanderlust Wine Co. storefront with painted armadillo.Photo from Wanderlust Wine Co. Wanderlust Wine Bar, downtown Austin, and soon in East Austin at 702 Shady Ln., (in the building that formerly housed another wine fave: Infinite Monkey Theorem, which was forced to close its Austin location during the pandemic), has 56 wines on tap, and you can become a founding member which gets you one free glass of wine every day for the rest of your life. It doesn't get any cooler or weirder than that. Whether you choose to be a founding member or just a patron, when you go to Wanderlust, you use your charge or debit cart at each tap of wine you want, insert card and pour your own.

Five of The Best Burgers and Burger Joints in Austin, TX

House hunting in Santa Fe, New Mexico is a Challenge That's Worth it, Despite Continually Rising Prices

Adobe house in Santa Fe, New MexicoPhoto by Matt Briney on Unsplash. After too many decades of "trying" to move to Santa Fe, New Mexico, I finally have the determination and an actual plan to buy a house there. Those of you who know me, or follow me elsewhere, know that my nickname and email names are Carolsantafe. Buying there was only a matter of time. Lots and lots of time.

I Was Attacked in Austin, TX. Here's What I Did and How to Defuse an Attack Anywhere

A homeless man suffering from mental illness pulled a knife on me two years ago in front of the Austin Recreation Center. It had been years since I trained in the martial art Aikido, but I instinctively measured my options. Fortunately, he gave me a warning, and therefore a chance. As he came up behind me and muttered gutturally, “Are you going to keep f(ool)ing with me?” I turned slowly while simultaneously stepping off the curb to get further from him.

More Entries in the Burger Wars in Austin, Texas, This Time all Drive-Throughs and Locally Owned and Operated

In Cody, Wyoming We Drive Until We See The First Buffalo

My friend Michelle Milner, who lives in Cody, Wyoming, often gets in her truck and just drives until the she the first buffalo. Sometimes this happens in thirty minutes, sometimes much longer, and sometimes nearly right away. Cody, Wyoming looks and feels like the old west, with western style store fronts, mountains in the background, rushing creeks that flow through town, and sky that goes on forever. The entire state of Wyoming is wide open spaces, sparsely populated towns like Cody, and a wealth of wildlife. My friend is an artist and a jeweler who need those wide open spaces to be inspired and reinvigorated. Maybe you do too. I certainly did when I visited.

People With Narcissistic Personality Disorder Leave Pain Behind: But Not Their Own

Have you had an intimate relationship with someone diagnosed with Narcissistic Personality Disorder? In the common vernacular, people with NPD are called narcissists. If you have, you’ve been hurt. If you’re still in the relationship, you are currently experiencing pain. I know. I’ve been there. Twice.

Medicare Pays For Eyelifts. The Extras Are Up to You

It’s a tragic fact of life that the slower we get, the faster we need to be to catch the fountains of youth. Whatever they happen to be in the modern age. I began to worry about aging during my mid-life crisis.

Photo by Steve Saunders on Unsplash. In the City Different, all aspects of life are celebrated.Including death. I don’t attend funerals when I can get out of them. The spirit, and the person they were, is not inside the body any longer. Framing a funeral around a body has always seemed to me a morbid practice. I even refused to view my mother in her casket, and we closed it for the funeral service.