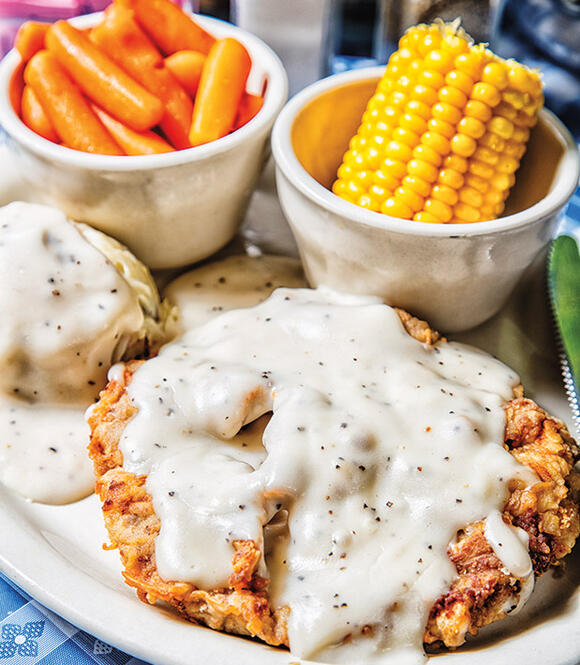 Chicken fried steak with corn and carrots.Photo by June Naylor.

I'm a native Texan who grew up on chicken fried steak. My first, and still the best I've ever had, was at a tiny cafe on the one Main Street of my tiny town. It set the bar for the ones I will eat, much less praise, today.

A good chicken fried steak has a thicker batter than country fried steak, which you're more likely to find outside of Texas. It has ONLY cream gravy, which is white, not brown, and has visible pepper. The absolute most important criteria is that it must cut with just a fork. No knife needed. It's traditionally served with mashed potatoes, a salad with French or Ranch dressing, and/or a local vegetable such as green beans or fried okra.

In my search for the best chicken fried steaks in Austin, Texas, the two criteria that are absolutes for me are cream gravy with pepper, and being able to cut the steak with a fork.

One restaurant that consistently meets my criteria is Able's On The Lake. It comes out the size of your face, which is another criteria in some people's search. The batter is exactly the right depth and amount, and the cream gravy is perfect. I seldom have to add pepper to the gravy, and it usually cuts with a fork. The accompaniments are traditional, mashed potatoe and a local veggie, and there's more than enough for two meals for someone like me. A truck driver like my dad was, or my 6'5" son, might consume the entire thing at one sitting. I have mine outside on the patio overlooking Lake Travis, where ducks and swans swim leisurely by.

Another favorite is on the menu at Cypress Grill, a New Orleans styled restaurant in South Austin. Cypress Grill serves all the best of Louisiana cooking. It also has one of the best chicken fried steaks in town. You can nearly always cut it with a fork. What sets their's apart from the best of the rest is the gravy. The base is the required cream gravy, but added to it is Boudin sausage. Quelle Magnifique. I order it almost every time I go there or order take-out.

The Broken Spoke is one of the most authentic settings for chicken fried steak. It is a huge dance hall where people go to two-step and three-step, or what Texans sometimes refer to as "boot scooting." The front is a small restaurant area, if you're only going there to eat. You can also eat at the tables surrounding the dance floor in the back. The chicken fried steak is huge, just like the dance floor. The breading is a little thicker than elsewhere, but is fried perfectly. The cream gravy is also authentic, although I do add pepper to it. My favorite criteria? Yep, it cuts with a fork.

Hoover's is a Black owned business that serves soul food in a casual, family style dining setting. Their chicken fried steak and some other dishes have a touch of Cajun/Creole flavor, which means they can be spicy. Generally, I don't consider spicy a traditional part of chicken fried steak, but southern cooking comes in many forms. Hoover's chicken fried steak is just spicy enough to add interest without being too hot. It's other claims to fame are that it's extra crispy, and it comes with a smoky bacon cream gravy.

There are more that I'll cover once I've tried them. I'm especially looking forward to trying Jacoby's Restaurant and Mercantile, where the meat comes directly from the family's ranch.

Speaking of meat, any steak can become chicken fried steak, but tender cuts which are then hand tenderized are the best. When I was growing up though, and when I make my own, the meat is always tenderized round steak. No matter what the cut, the tenderizing and the cooking technique and time give it my main critieria for the best chicken fried steak. You can cut it with a fork.