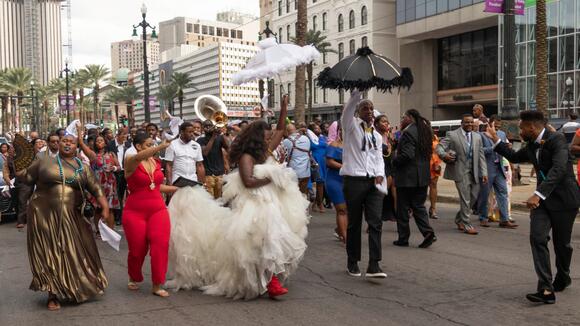 Photo by Steve Saunders on Unsplash.

In the City Different, all aspects of life are celebrated.Including death.

I don’t attend funerals when I can get out of them. The spirit, and the person they were, is not inside the body any longer. Framing a funeral around a body has always seemed to me a morbid practice. I even refused to view my mother in her casket, and we closed it for the funeral service.

In spite of my resolve not to attend funerals, the one I traveled to New Orleans for last weekend was a necessity. The young man I gave a home to, and raised from ages fourteen to twenty, was murdered in our home town of Fort Worth, Texas. He was a Hurricane Katrina survivor, along with his entire family. But somehow during the evacuations and resettling, he wound up with his father and little brother in Fort Worth, while his mother and sisters relocated back to New Orleans after their house was ready.

My son, Blake, met him in Middle School, where Larry stood up to a bully for my son. Larry was six feet tall when he was fourteen. My son, who is now six feet five inches, was only five feet four inches at age thirteen. They bonded as brothers while he lived with us.

The funeral was difficult for my son. He had only attended one other one, for a much older person. This was infinitely harder. The casket was open, and Blake was a pall bearer. The pall bearers physically pushed the casket into place in the mausoleum. I wasn’t sure if he could do it. But Larry’s New Orleans family closed ranks around us both, and took us into their hearts, and my son fulfilled this saddest of duties.

After the funeral, we went to the reception. At every other funeral I’ve attended, people ate, offered condolences and left. Not in New Orleans.There was a D.J., and everybody from six-year-old to seventy-six-year-old people danced. Including me and my son.

At first, it felt strange. The music was hip hop, loud, and with a driving beat. We danced and sang to “I’ll Be Watching You,” over and over, adding Larry’s name to the chorus, plus other rousing music. It was a far cry from somber hymns.

While you couldn’t call it a Jazz Funeral without jazz, the revelry comes out of the same history. Music and dancing are meant to help the deceased find their way to Heaven. It also celebrates the release from the earthly coil. The history goes back to slavery days, when death was the person’s only and final release from slavery.

On the website, FUNERALWISE, the growth of this tradition is linked to Africa, brought over by slaves. “The call-and-response style of music and chant, coupled with tambourines, drums, music and dancing were elements of African funeral ceremonies.”

The dancing provided an outlet for our grief, and a cathartic release. It also had the impact of helping my son and me, and the two friends who went with us to be pall bearers, bond with the family. The funeral was the first time we had met Larry’s mother and sisters.

The next day, the family, friends, and my son and his friends danced in the Second Line. Originally, the Second Line was groups of people who joined the funeral procession along the way, and the dancing at the reception. Second Lines are also formed for weddings, to celebrate the beginning of a new life for the couple.

Now, New Orleans hosts a Second Line every Sunday. Streets are blocked off in different parts of New Orleans each week. Bands play, people walk and dance, and liquor and food are sold out of the beds of trucks.

At every funeral, and every Sunday with Second Line, the people of New Orleans celebrate life in all its complexity, death following as good a life as possible, and the rebirth of the soul into Heaven. Our overwhelming sadness at losing Larry at age twenty-seven, just as he was beginning to get his life together, and to be truly happy, was lifted for an hour or two as we danced his soul into Heaven, and formed new bonds on earth.