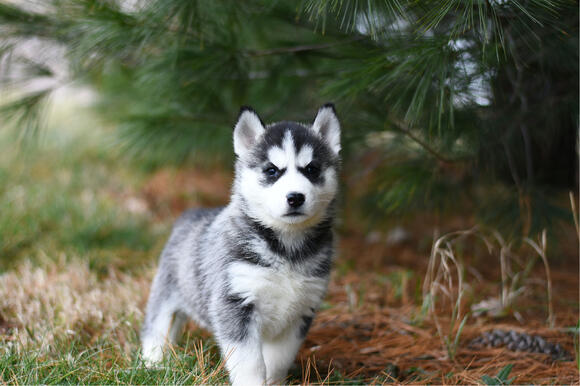 Have you ever found a lost dog before and wanted to keep it? The main worry, in this case, would be that the dog already had an owner. Another possible concern is probably one that would never cross your mind. What if the puppy was actually an illegal to own wild animal? 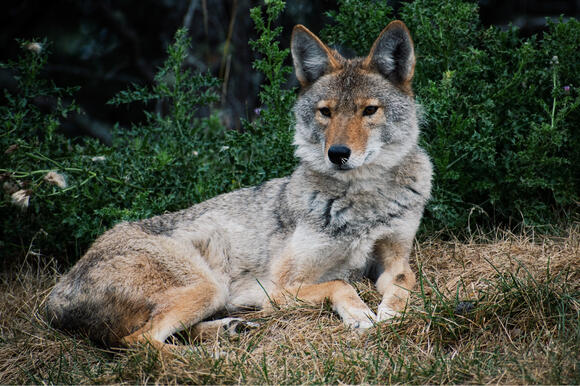 Well, that is what happened when a family found and took in an adorable puppy who was all alone by the side of the road. Unfortunately, this particular pup was not destined to become the newest member of their family. Even if they had wanted to keep him, Coyotes are illegal to keep as pets in Massachusetts. That's right; this orphaned baby was, in fact, a Coyote puppy! But do not worry, readers, for this Coyote did eventually find a new family. 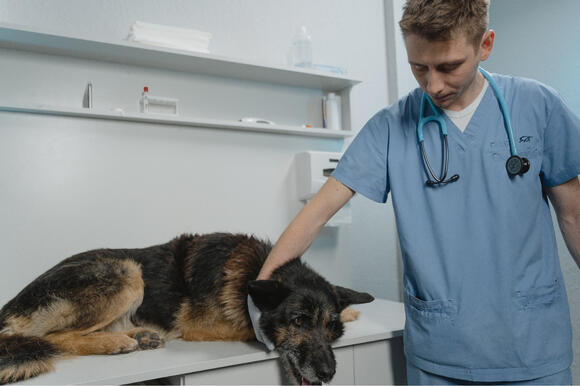 Where Did He Go?

After the pup was identified as a wild Coyote, it was quickly transferred to a wildlife rehabilitation center. The New England Wildlife Center is located in South Weymouth, Massachusetts. This non-profit center was founded in 1983 and was funded entirely by private donations. As a community-integrated 501(c)(3) charitable organization, the NEWC receives no state or federal funding and is still completely supported by donations. Since 1983 they have provided rehabilitative care and veterinary treatment to over 120,000 wild animals.

Who Became His New Family?

The orphaned Coyote pup became one of those lucky animals to receive the NEWC's support. There, he spent six months of rehab while also getting to know another orphaned Coyote. The two foster siblings formed a strong bond during their time at the NEWC and were released together back into the wild on September 21st. Although there is no guarantee they will stay together now that they are back in the wild, there is always the chance these two will stick together for the long haul.

"Releasing them as a unit will hopefully increase their survival rate in the wild. While some coyotes may choose to part ways after release something tells us these two may be bonded for life." - From the New England Wildlife Center's Facebook Page

Find Your New Best Friend, AND Hold an Alligator at This One Day Only Event!

(Photo by Ricardo Esquivel) Are you someone who loves animal companionship but can't devote the time or money needed to care for a fur baby of your very own? You might think your only real option is a goldfish or betta. And sure, fish can be an entertaining option, but don't you want to aim higher?

If you were to ask yourself what the biggest issues facing humanity are these days, the list is sure to go on and on. Everywhere you turn, there seems to be more societal, economic, and political unrest. And even these monumentous issues pale in comparison to the extinction-level threat that is climate change. It can be exhausting and depressing, especially when it feels like you have no control over any of it. But the good news is, you are not alone. The Hitchcock Center for the Environment invites you to join their new Climate Action Series!

(Photo by Charles Parker) October is coming to a close, and pretty soon, you will need to wait a whole year to enjoy the Halloween season again. You know what that means, right? Those candy and costume clearance sales are just around the corner! But even more important than that, you only have a few days left to pack in as much Halloween excitement as possible! And in these last days of the month, when deciding whether or not you should trick or treat, I ask you this; Why not both? The EcoTarium of Worcester, Massachusetts, offers that chance this October 29th and 30th with Science Tricks & Animal Treats!

Don't Miss This Seminar That Could Save Your Pet's Life!

In the post covid age, cleanliness has become a much more serious issue for the average American. We all remember those days of coming home from the grocery store only to disinfect as much of our food as possible before putting it away and jumping in the shower. And though those ridiculously over-cautious days may be behind us, there is no doubt that many people are still using an excessive amount of cleaning products. But have you ever stopped to think that instead of making your home "safer," you are actually just creating a world of danger for your fur baby?

You're Invited to the "Zoo Boo Spectacular!"

As October moves through its final weeks, it's essential to stop and take a moment to appreciate everything the month has to offer. Really take in the breathtaking phenomenon of New England's leaves changing color. Savor every cinnamon-infused sip of your pumpkin-spiced latte. And most importantly of all, make sure you and your family are in Attleboro, MA, on the 28th for 'Zoo Boo Spectacular!'

(Photo by Charles Parker) While October brings Halloween fun all month long, we are forced to wait until the very end for one of the season's greatest past-times. I am, of course, talking about the candy-acquiring artistry that is Trick-or-Treating. Furthermore, this extraordinary event usually occurs at night, when it is freezing! But the undisputed worst element of traditional Halloween Trick-or-Treating is that you can't share your candy with an Elephant. Thankfully, the Roger Williams Park Zoo offers a solution in the form of 'Spooky Zoo!'

This Class Could Save Your Pet's Life!

Any dog mom or dad out there knows the crippling fear that comes when their fur child eats "something" off the floor. The fear only grows worse when after reaching into their mouth, you come up empty-handed. What did they swallow?? It could be chocolate, a tack, or maybe even a pill! What if it's stuck in their windpipe, and they start choking? What would you do?

Whether on your streaming services, social media feeds, or even the t-shirt of that kid standing in line in front of you, you can't hide from the growing phenomenon that is anime! And regardless of if you are a longtime fan, a complete newbie, or just someone interested in learning more, you will be happy to know that a brand new anime store is coming to Olde Mistick Village in Mystic, CT!

(Photo by Nikola Čedíková) Are you someone who loves animals? Do you live in or near Arlington, Massachusetts? Would you like to have a fantastic night seeing a world-renowned comedy show? If you answered yes to all three of those questions, then I have some amazing news for you! The Popovich Comedy Pet Theater is coming to Arlington!

You're Invited to Cocktails For Critters! (Marshfield, MA)

Have you ever wanted to combine your love of cocktails with an overwhelming desire to help animals in need? Who am I kidding? Of course, you have! Which is why you need to act now and order your tickets to Cocktails For Critters 2022!

Roger Williams Park Zoo Invites You to a Pumpkin Spectacular!

(Photo by Patrice Schoefolt) Are you tired of the constant stream of televised content being thrown at you from every corner of the web? Every time I blink, there seems to be a new streaming service popping up with at least one or two shows that I NEED to see. It can be overwhelming. Wouldn't it be better to get out into the fresh air and take advantage of that early fall weather? Even better, what if you could appreciate your favorite shows at the same time?? Take it even a step further; What if those very shows were carved into pumpkins?! If you're still not sold, then I have just three words for you: Yellow-Rumped Cacique.

Come See the Extra Fluffy Penguins For Limited Time Only

If you live in Massachusetts, there is a good chance you have been to the New England Aquarium at least once in your life. The two things that will almost certainly come to your mind when thinking about this aquarium are the enormous spiraling tank in the middle and the penguins under it! While anyone would tell you the Giant Ocean Tank is impressive, the penguin colony surrounding it is frequently far more entertaining. The penguin exhibit, containing 150,000 gallons of water and over 60 penguins, is guaranteed to leave a lasting impression on visitors.

Have you ever been to a food truck festival and thought to yourself, 'the only thing that could make this better would be a Bolivian Gray Titi Monkey?' Well, do I have good news for you because this November 11th, your dream can finally become a reality! The Roger Williams Park Zoo will be hosting Food Truck FriDAY at the Zoo.

How to Keep Your Yard Safe From Bears!

Black bears are back in Massachusetts! After years of hunting and deforestation pushed them further and further West, the bears, have begun their return East! Well, to put it less dramatically, bears have actually become more and more common throughout the state of Massachusetts since the 1970s.

One never really needs another reason to visit New England's largest zoological Experience. After all, the 200-acre zoo is home to over 850 animals, all residing in naturalistic and spacious exhibits. What more could one ask for in their zoo experience? The Festival of Illumination, that's what!

Autumn in Massachusetts is genuinely one of life's great treats. The trees are filled with brilliant colors, and the weather is briefly (we hope anyways) not too hot and not too cold. One of the best things about this time is getting to enjoy all the spooky Halloween spins on already great establishments. Luckily for all the animal lovers out there, The Winslow Farm Animal Sanctuary is no exception!

Black Bears Are Back in Massachusetts! What Should You Do if You See One?

(Photo by patrice schoefolt) When you think of common Massachusetts wildlife, your mind probably conjures images of squirrels tearing down bird feeders, groundhogs peeking out from under your shed, or seemingly endless turkeys slowly crossing the street in a single file. As far as "dangerous" predators go, your pets have more to worry about than you, in the form of coyotes and hawks. But one animal that most Mass residents probably have never seen in the wild is finally making a reappearance. Bears are back!

(Photo by ArtHouse Studio) A chill is in the air, the leaves are changing color, and pumpkin spice lattes are back at Dunkin' Donuts. That can only mean it is once again the spooky season. It's that one time of the year when you can be sure that every supermarket around will be overflowing with pumpkins. And going hand in hand with that return comes an event that has not been seen in two years. At long last, the return of Carve - O - Rama!

Obsessed Over Oysters? OysterFest October is Back!

(Photo by RODNAE Productions) Calling all oyster lovers! The long wait is finally over. So sharpen those shucking knives, strap on a bib, and come on down to Wellfleet, Massachusetts, for their annual OysterFest!