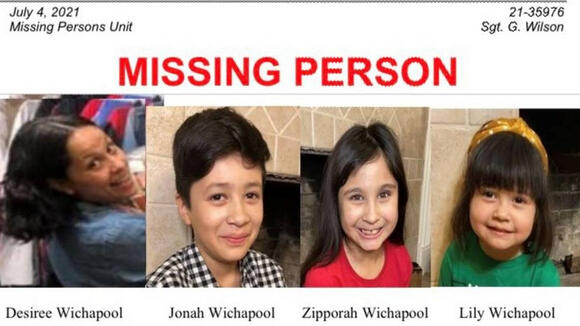 Desiree and the three children have all been found, police say. They have not released any further information.

The Fresno Police Department says they have found the missing mom and her three children who recently went missing.

Fresno Police Department says Before they were reported missing, Desiree Wichapool, 39, and her three children Jonah, 10, Zipporah, 7, and Lily, 3, were last seen leaving church in Clovis on Sunday around 11:30 a.m. July 3rd. That’s on the 2300 block of Helm, near the intersection of Willow and Shaw.

Law enforcement officers found Wichapool’s car in Madera County about three hours later, on Highway 41 near Rd. 200. But the mom and kids were nowhere to be found.

The family lives in Fresno in the 900 block of N. Roosevelt, near Palm and Olive.

Officers have confirmed the family has been found but say they do not have any other details at this time.