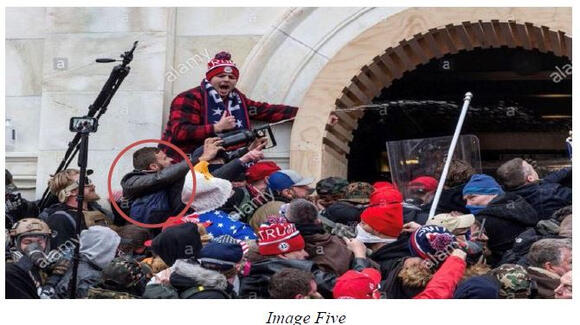 The state of Florida is home to the most defendants charged in connection to the Jan. 6 Capitol riot, and a Hillsborough County man arrested Friday has brought the total to 52.

Mitchell Todd Gardner II, 33, made his first appearance in Tampa federal court Monday for the felony charges of destruction of government property and obstruction of an official proceeding, as well as four misdemeanors.

According to the criminal complaint, the Joint Terrorism Task Force with the FBI Tampa Division identified Gardner when reviewing U.S. Capitol security camera footage and other open source pictures and photos from outside the Capitol during the chaos on Jan. 6.

Twelve of the 52 Capitol Riot defendants in Florida are from counties in the greater Tampa Bay area, according to the Program on Extremism at George Washington University that is tracking more than 500 cases nationwide.

Democratic gubernatorial candidate Charlie Crist and other local leaders held a news conference on June 18 calling on Gov. Ron DeSantis to take action on Florida’s association with the Jan. 6 insurrection.

Three weeks after the insurrection on Jan. 27, the FBI Tampa Division conducted a phone interview with a witness who made an online tip regarding an encounter with Gardner.

The witness told investigators that on Jan. 17 Gardner told them that he was at the U.S. Capitol on Jan. 6 and “things got a little crazy.”

During a second in-person interview in March, that witness positively identified Gardner as the person in several photographs from the U.S. Capitol.

Through a search warrant, investigators also obtained phone records showing Gardner used his cell phone around the time of riot in the interior of the U.S. Capitol building.

The misdemeanor charges against Gardner include knowingly entering or remaining in any restriction building; engaging in disruptive conduct to interrupt government business; uttering loud, threating or abusive language; and parading, demonstrating or picketing inside the Capitol Building.

Gardner had been booked in the Pinellas County Jail on Friday before being released to U.S. Marshals on Monday.

WFLA reached out late Tuesday afternoon to Gardner’s DC-based defense attorney David Benowitz for comment and has not heard back.

Just last week, 54-year-old Graydon Yound from Englewood agreed to plead guilty to charges of conspiracy and obstruction of an official proceeding.

As part of his plea deal, Young has agreed to cooperate with federal prosecutors in the conspiracy case involving other accused members of the Oath Keepers far-right extremist group.

38-year-old Paul Hodgkins from Tampa took a selfie inside the Senate Chamber on Jan. 6, steps away from the rioter Jacob Chansley, known as the “Q Shaman.”

Hodgkins awaits sentencing in July after pleading guilty to obstruction of an official proceeding.

“He stood up and said, I’m not making any excuses, what happened was wrong and I’m wrong,” Hodgkins’ defense attorney Patrick Leduc told WFLA.

Federal guidelines call for Hodgkins to be sentenced to between 15 to 21 months in prison, but Leduc said he is hopeful his client will receive a more lenient sentence.

“He got swept up like everybody else, got caught in the moment and followed the crowd,” Leduc added.

One of the most widely circulated photos immediately after the Capitol riot showed 36-year-old Adam Johnson of Parrish smiling while carrying a stolen lectern belonging to Speaker of the House Nancy Pelosi through the Capitol Rotunda.

Johnson is charged with various unlawful entry offenses as well as theft of government property.

There are seven deaths associated with the chaos at the Capitol, including Trump supporter Ashli Babbitt who was shot and killed by police and Capiton Police Officer Brian Sicknick who suffered two strokes and passed away the next day.