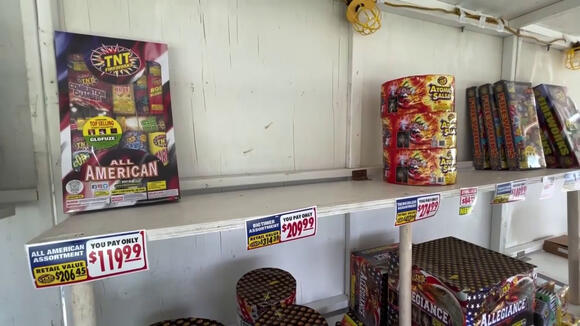 A Central Valley non-profit is out thousands of dollars after their 4th of July firework stand was burglarized before they could even open.

It happened Tuesday morning in the area of Nees and First in northeast Fresno.

“If you see some people selling fireworks called The Perfect Show, Big Timer, Big Deluxe — the big family packs those are all the items that they stole,” Kameka Pulliam of Delta Sigma Theta Sorority Inc. said.

The losses were estimated at around $10,000 with all the priciest items taken.

The service-based sorority uses the stand to raise money for scholarships, mentoring, and other community programs.

“It’s unfortunate because we volunteer our time, and all the proceeds from this fireworks stand, it goes back to the community,” Pulliam said.

Shane Brown with the Fresno Fire Department said they provide 60 firework stand permits per year. He said even though the fireworks the stand sells are legal, anyone selling them without a permit is doing it illegally.

The fire department is working with the police department to crack down on this type of crime.

“These people should not have to worry about someone coming along and stealing their resources and turning around and illegally selling it. So even though these are fireworks that are considered Safe and Sane if you don’t have a permit you’re not allowed to sell these,” Brown said.

The women who run the stand said they are expecting to get more inventory in and the best way the community can support them is to visit them and purchase fireworks.