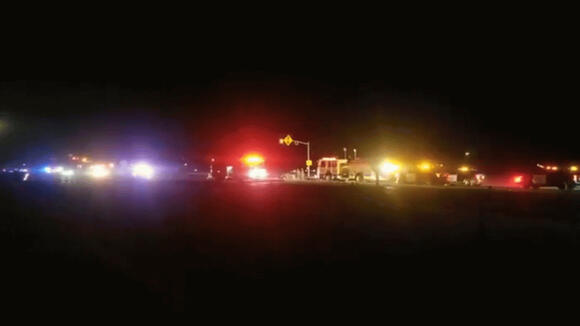 A crash in Atwater left two people dead on Friday night according to Merced CHP officials.

Just before 10:00 p.m. the Merced CHP office received a call about a vehicle on fire near Santa Fe Drive and Spaceport Entry in Atwater.

Upon arrival, officials say officers saw a 2012 Honda engulfed in flames and a 2012 Lexus overturned near the area.

The driver and passenger of the Honda both died on scene according to CHP.

Officials say the driver in the Lexus was believed to be under the influence at the time of crash and suffers from moderate injuries.

Man killed in hit-and-run outside Sanger

A Hispanic man in his 50s was struck and killed in a hit and run outside Sanger on Friday, according to the CHP.

The incident took place around 9:00 p.m. on Greenwood Avenue, south of North Avenue.

Officers say the vehicle that struck the victim is described as a black truck, possibly with lights on the roof. The suspect vehicle was travelling southbound on Greenwood Avenue at the time and should have front-end damage following the incident.

According to the CHP, the victim was already lying in the road prior to the crash. Investigators say the victim was possibly injured after falling off a bicycle.

Anyone with information about the crash is asked to contact the Fresno-area CHP. The victim is yet to be formally identified.