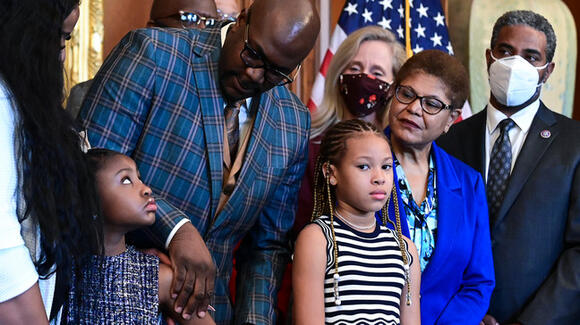 George Floyd's 7-year-old daughter says she wishes she could tell her late father that "I miss you and I love you."

Gianna Floyd's video interview was played in court Friday during the sentencing hearing for former Minneapolis police Officer Derek Chauvin, who is charged with murder and manslaughter in Floyd's death.

Gianna Floyd said in the victim impact statement that she believed her dad was still with her in spirit and that she wants to know how he got hurt.

"We used to have dinner meals every single night before we went to bed," she said. "My daddy always used to help me brush my teeth."

She had a long list of things she would still have liked to do with her father. "I want to play with him, have fun, go on a plane ride."

Hers was the first of four victim impact statements expected at the sentencing.

Derek Chauvin is an US former police officer who was convicted for the murder of George Floyd in Minneapolis, Minnesota.Chauvin had knelt on Floyd's neck for about nine minutes while George Floyd was handcuffed and lying face down on the street calling out " I can' breathe" repeatedly during an arrest made with three other officers on May 25, 2020. He was fired by the Minneapolis Police Department (MPD) on May 26 and was arrested on May 29. The murder set off a series of protests in the Twin Cities and across the rest of the United States, later spreading around the world. Chauvin was charged with second degree unitentinal murder, third degree murder and second degree manslaughter. His murder trial began on March 8, 2021