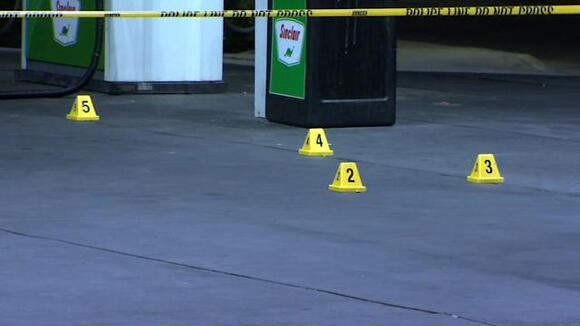 Fresno police are searching for two groups of people who exchanged gunfire at a gas station in central Fresno.

Gunfire exchanged at outside central Fresno gas station happened around 11:30 pm on Thursday at the Sinclair station on Blackstone and Dakota Avenues.When officers arrived, they found multiple shell casings in the parking lot and the street.Detectives say they have not received any reports of shooting victims. There were no witnesses at the scene.

Investigators say surveillance video will help them identify the shooters.

"Based on the video, it does appear that there was an exchange of gunfire. We're probably going to have to analyze the video a little bit more. But based on what we have right now, it appears that two groups of people were firing back and forth," said Fresno Police Lt. Israel Reyes.

Detectives say they have not received any reports of shooting victims.Police are looking for a red, four-door vehicle and a gray Chevy Malibu, which gunfire may have hit.

Anyone with information is asked to call Fresno Police Department.

One person is dead and several others injured after gunshots were fired at Lake Merritt in Oakland, northern California, on Saturday, police said.

The shooting happened on Lakeshore Avenue at Lake Merritt just after 6p.m. where people had gathered for a Juneteenth celebration in Oakland on the other side of the lake.

A 22-year-old male from San Francisco was shot and killed near the event. Six others were injured. They were reported to be in stable condition.

Police officials estimated a crowd of approximately 1,000 people in the area.

Crime Stoppers of Oakland and the Oakland Police Department are offering up to $40,000 for information leading to the arrest(s) in this case.