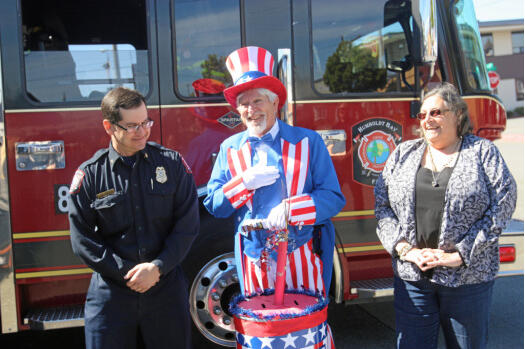 After 25 years of service, Charlotte McDonald will be stepping down from the executive director post at Eureka Main Street due to retirement.

McDonald’s work saw the business association grow and develop into a public-private partnership to serve businesses in the historic downtown district.

McDonald told the California Sun Rise the organization’s work under her leadership was promoting businesses in the city’s historic core.

“Our mission has always been to do everything we can to improve and support the businesses in downtown and Old Town. We have created a very vibrant Old Town and downtown has redefined itself as a commercial district with banks and now with cannabis,” McDonald said.

McDonald will be stepping down as Eureka’s Office of Economic Development is slated to partner with the organization’s governing board to manage the day-to-day operations starting July 1, corresponding with the start of the city’s fiscal year.

Under this new mode of operation, the city and Eureka Main Street’s board will continue to support and respond to the needs of businesses in the district.

Eureka City Manager Miles Slattery said the joint operation was previously discussed back in February and March as a way of improving efficiency between Eureka Main Street and the city.

“If a business owner has a concern, that goes through Main Street and then it comes to the city, and that’s an extra layer. … And so, we’ve had the opportunity with Charlotte retiring to provide more efficiency and having it so that the city would be in direct contact,” he said.

The Economic Development office will be filling the responsibilities of the executive director such as fielding member concerns, attending board meetings, posting agendas and implementing events such as Arts Alive, Thursday night concerts and other events historically organized by Eureka Main Street.

Eureka Main Street assistant director Amanda Krushke will be working with Eureka in managing the relationship between both organizations.

McDonald is optimistic about the future work of the organization in conjunction with the city.

“It’s going to be really awesome. We have a supportive city and our assistant director will have an extra group of friends, or an audience, to help,” she said. “They will do a great job. Amanda has been with me for 11 years and the city has been supportive of Main Street since 1988.”