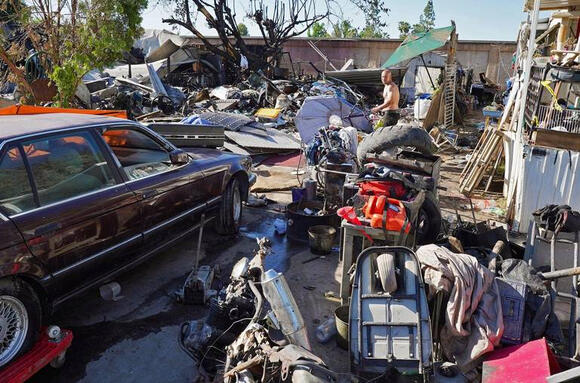 The state will hand over responsibility to the City of Fresno to enforce health and safety codes for its mobile home parks, said Fresno Mayor Jerry Dyer on Thursday.

“That will provide the city attorney’s office with the ability to go out and to enforce code enforcement violations within those mobile home parks,” Dyer said.

In less than three months, two fires have occurred at Trails End Mobile Home Park, one of which took the life of 56-year-old Ronald Richardson.

“That means a lot to me. It’s about time. Before they were just giving the owner a slap on the hand and letting them get away with running this mobile home park so dangerously,” Griggs said. “Nobody gave my nephew a second chance or a warning.”

This comes after an investigation found that Trails End Mobile Home Park had been operating with a suspended permit for months due to unsanitary conditions.

Dyer said he visited the mobile home park a couple of weeks ago.

“Talked to the residents there, and I gotta tell you, that entire mobile park is a disgrace to the City of Fresno,” Dyer said.

Dyer said the city will be meeting with the State Department of Housing and Community Development to discuss the transition on Friday.

Fresno City Attorney Douglas Sloan said they expect Friday’s meeting to tell them when they will take over full responsibility of the 26 mobile home parks in Fresno.

“Then Monday, HCD plans to have inspectors out there, we will have 30 people out there to do both inspections and an abatement crew is ready to take care of any hazardous conditions,” Sloan said.

Richardson died trying to save others while a mobile home was engulfed in flames in May.

“Whether or not the transition to the City of Fresno a year ago would have prevented the death of Mr. Richardson, we’ll never know that. But what we do know that from a go forward basis that the mobile home parks in the City of Fresno are going to have a higher quality of standard of living,” Dyer said.

Dyer and Fresno City Councilman Garry Bredefeld initially pushed for the city to take over responsibility of the city’s mobile parks.

Bredefeld said he wants residents to know that “help is on the way.”

“Fresno is not going to tolerate any other nonsense that has been going on for a long time. We’re going to make that place safe, secure which it hasn’t been for a long time,” Bredefeld said.

On the financial side, Dyer said he expects those issues to be ironed out with the State Department of Housing and Community Development.