Two detained for 400 pounds of illegal fireworks in Fresno 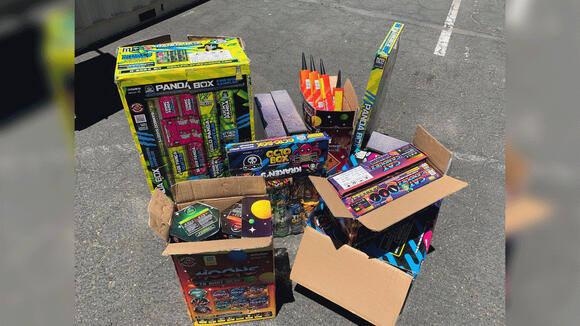 Two detained for 400 pounds of illegal fireworks in Fresnoshuttershock

400 pounds of illegal fireworks were found and taken in during an undercover operation on Wednesday according to the Fresno Police Department.

Police say they detained and cited two adults thanks to the department’s undercover detectives and through social media tips.

The two adults were cited by the Fresno Fire Department for a fireworks violation and were fined $1,250 according to officials.

Fresno police say they also arrested one of the adults for unlawfully carrying a loaded handgun.

The Fresno Police Department and the Fresno Fire Department are teaming up ahead of the 4th of July weekend to prevent the sale and use of illegal fireworks.

Officials say last year they received 135 calls on the 4th of July alone for fire-related emergencies, and with this year’s drought, they are trying to work ahead of the holiday weekend to prevent more fires.The taskforce created by the fire and police departments started two weeks ago and they’ve already responded to 358 different calls.

The fire on Tuesday at Millerton Lake was a result of illegal fireworks and they’re trying to combine resources to prevent more.

“Illegal fireworks that leave the ground then land, and those sparks will often ignite – a dry tree, a dry bush, a home that might have a wooden-shake roof – those things lead to larger fires.”

Right now, a petition is circulating the internet calling for a ban of all fireworks in Fresno, except on designated holidays.

If you are caught selling or using illegal fireworks in California you can face fines of more than $1,200 and, depending on the number of fireworks, you can be charged with a felony and felony arson if they cause a fire.

The police and fire department have created a taskforce that goes out every evening to address the issue. They made two felony arrests on Tuesday and have given 20 citations so far.

“People are bringing significant amounts of fireworks here so they can sell them here, so they can pop them illegally in a community that’s suffering from a drought. that’s not OK – legal or not – and we’re taking action,” Balderrama says.

To report illegal fireworks, the Fresno Police and Fire departments are asking citizens to use the FresGO app so their phone lines are not backed up.