I am a travel blogger originally from Texas. I have been traveling for some 5 years to the best attractions, camping locations, theme parks, national parks & more. Along the way I catch local news, share unique destinations and tell you the best tips and tricks for travel to some of the greatest locations in the US. Check out more exciting adventures on Youtube or Instagram: BUNNYPLAYSHERE

Oklahoma, The Home Of The "World's First Cowgirl" 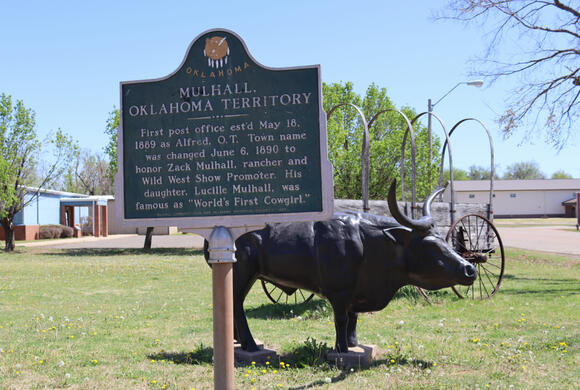 When passing through the quiet town of Mulhall, don't miss the opportunity to stop and read about the "World's First Cowgirl"Bunny - www.bunnyplayshere.com

Mulhall, Oklahoma is not a town many would be able to locate on a map, nor is it a place where you will find a large population of people in modern day Oklahoma. However this sleepy town of less than 300 has a deep history and boasts the title of being the home of the first “cowgirl” in history.

The town began as a railroad station for the Santa Fe Railroad. Originally named Alfred, the town later had to be renamed following the land run because of other communities with similar names and confusion it caused as a result.

Seeking a new name, the town turned to one of the most boastful and larger than life residents, Zach Mulhall. At the time Mulhall hosted his own wild west stye show and traveled the country with rodeo like performances. His name was well known and the community found it to be a symbol of pride when they made the shift.

Mulhall had a daughter, Lucille, who was said to be able to hold her own on horseback. This led to her introduction to the world of rodeo through her fathers traveling shows. At the time, women were not welcomed into the arena as they are in more present days however her talent and presence were undeniable. She began to take center stage with her male counterparts and grew in popularity earning the title of the “World’s First Cowgirl”.

Lucille performed alongside the likes of Will Rogers and Tom Mix and was said to have learned her most well known skill of twirling from Rogers himself.

She went on to be recognized throughout the years in many publications and throughout her career held the title of World Champion Lariat Thrower. She performed in many arenas across the nation and even was asked to entertain the then President Theodore Roosevelt. Her title of Cowgirl transitioned into that of “Queen of the Saddle”, “Queen of the Western Prairie” and “Rodeo Queen” setting the stage for women of the future to compete and be a part of the phenomenon of the rodeo.

By 1916, she owned and produced her own traveling rodeo, no longer performing merely under her fathers platform. She was pioneer of the time in entertainment and by 1922 she returned to Mulhall to hang up her fame and settle down at her family’s ranch. Some years later, only a short distance from her ranch, she passed away in an auto accident ending the story of the “World’s First Cowgirl”.

I am a travel blogger originally from Texas. I have been traveling for some 5 years to the best attractions, camping locations, theme parks, national parks & more. Along the way I catch local news, share unique destinations and tell you the best tips and tricks for travel to some of the greatest locations in the US. Check out more exciting adventures on Youtube or Instagram: BUNNYPLAYSHERE

When driving through lower New Mexico, you might notice the rolling rocky hillside open up to an area that almost, from a distance, appears to be snow. However did you know this area, located just outside of Alamogordo, New Mexico, is in fact one of the most unique places in all of the United States?

Nestled in the heart of Aspen, Colorado, the John Denver Sanctuary is a picturesque look at the Rocky Mountains. With views throughout the park highlighting the natural wonders of the area including flowing waters, intentional planting and wetlands, the park offers a peaceful retreat for all those wanting to unwind and unplug for a moment while visiting.

What To Expect While Camping At Oklahoma's Robber's Cave

Camping at Robber’s Cave State Park you will quickly discover that no matter what your overall preference for camping style, they pretty much have you covered. On a recent trip I visited the park and discovered that from primitive to improved sites, equestrian areas, ATV areas, they have a bit of everything. The camp even has options for those who aren’t feeling quite as adventurous and want to live in a bit more of the creature comforts we all have at home with cabins, a lodge and yurts.

Wedged just between Zion and Bryce Canyon is a location which becomes dwarfed by the hype surrounding the two much larger parks, Red Canyon. While many pass through the winding roads and toward one of the larger parks, they find the landscape to be unique but usually assume must be a part of the larger area.

Everything Is Bigger in Texas! Check Out The Largest Cross In the Lone Star State

Texas has become known for the mantra “Everything is Bigger in Texas”. It is a badge that most Texans wear with honor as everything from football stadiums to plates of food and everything in between seem to follow suit in creating a larger than life depiction of what it is to be a Texan.

The "Blue Ghost" of Corpus Christi

Every Texan loves a good trip to the coast. Be it the beaches or the entertainment, the coastal communities are filled with life and interesting things to do. Amongst those typically we think of the restaurants, shopping and fishing or recreation boats, however a much larger boat might peak your interest on your next trip if you are traveling to the Corpus Christi area.

The Texas Town That The Cat In The Hat Calls Home

We all have a familiar childhood favorite we loved reading. Many of these memories carry with us into adulthood and when we catch a glimpse of the cover of some of the books at a store the memories flood in.

The 215 Foot Tall Bridge Of Virginia!

When you think of Virginia, several things might come to mind including the scenic coastline, historic cities or the Shenandoah National Park where you an meander your way through the skylines peering off into natural beauty. But while exploring the great state, you will not want to miss a slightly lesser known natural wonder, the Natural Bridge State Park.

The Americanized Version Of Stonehenge

When it comes to unique attractions, the United States is littered with artistic creations. From larger than life random objects to locations which offer a creative voice to commonly visited locations abroad. From the Eiffel Tower to Stonehenge, the US has managed to find its own unique way to share the most visually stimulating locations from around the world in their own back yard.

How To Safely Travel Amidst Covid

Safety when traveling is very important throughout Covid, but a few simple steps can be taken to allow you to rest assured.Bunny. Covid’s most recent surge of Delta variant is spread with alarming speed. Effecting the at risk population of those who have not yet been vaccinated and those who are younger this variant is setting off many alerts across the nation in regards to travel and day to day interactions.

Birthplace Of An American President

So often throughout history we find that there are words which were spoken that could easily be inserted into more modern days and still have relevance. So many of these come from important speeches and words of wisdom shared by Presidents of the past. But before those words could be heard, each of these Presidents had to start from something.

If you haven’t visited Austin in a while, you might find yourself lost in wonder as you attempt to located the Hope Outdoor Gallery. The once bright and full of life site nestled along Baylor Street had been the home of the Austin art scene since 2010. For 10 years it welcomed artists to express their creativity in a safe space that would allow their art to be seen by whomever decided to find a parking place along the precarious roadway.

Salado, Texas might be on your list to find unique Texas art or perhaps an antique or two, but rarely do people realized that Salado is also home of one of Texas’ more unique stop. Driving through you might be taken aback by the waterfront or the quaint downtown, but rarely do people stop for a moment to soak in the legend of Sirena the Crying Indian Mermaid.

Colorado is perhaps one of the most interesting states to visit. Because of its many mountains and its western placement in the United States for many years it was considered to be part of the Western Frontier. During these times only fur trappers and Native Americans roamed the lands with the exception of an occasional expedition or two looking to discover more of the unknown.

The Story Of The Arkansas Ghost Town

Along the Arkansas backgrounds you can find the remnants of old barns and farms strewn about with decaying structures well past their prime. Each tells a story of someone who once was and a way of life long since passed. But not every day do you find an entire city left behind in time.

Is The Garden Of Eden Located In Kansas?

When searching for the larger than life roadside stops across America it is easy to see a few similarities across the board. You might find several stops with Texas-Sized chairs, Muffler Men, oversized mascots or a variety of places spanning from the somewhat normal to the crazy. Oversized has always been an obsession it seems and with Ripley’s and Guinness Book entertaining the ever ongoing search for the next big thing, quite literally, the list continues to grow.

Kansas, The Home Of The World Renowned Toilet Bowl

Lucas, Kansas can easily be regarded as one of the most unique communities in Kansas. With several unique art displays found and 2 of the states strangest attractions, many come here to get a taste of the odd and unique. With sites on the Kansas bucket list, one might say that this tiny community of only 370 people might not seem a likely stop however from the time you enter the community until you make it to downtown’s most infamous stop Bowl Plaza, you quickly get the impression that this isn’t your average small town.

If you have ever driven through the vastness that is West Texas, there are many miles of uninterrupted farm and ranch lands. Windmills dot the sides of roadways and the land seems to span onward into the vast unknown. Then suddenly for a moment you will pass through a small community with perhaps a stop light or two then back to the long drive ahead. It is not until you get to Amarillo that the monotony of the roads length subsides with monotony and traffic once again.

If you have ever traveled the Mother Road of Route 66, you have likely seen two bold arrows jutting out of the ground in Arizona. This is the home of the once thriving, Twin Arrows. Long since abandoned and left to ruin, Twin Arrows is now considered a ghost town and relic of the past.

Oklahoma City has become a vibrant source for fostering artistic talent. With many districts now boating much more colorful displays and creative works, the city has come to life and exudes a vibrant artistic culture.