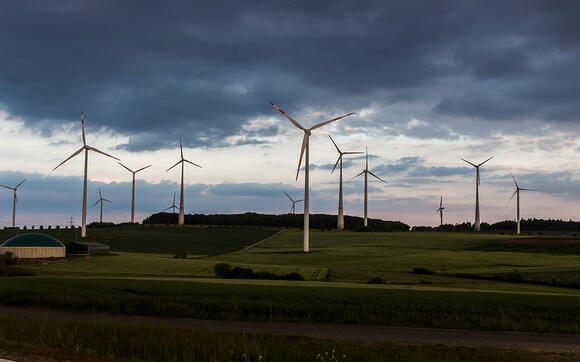 Federal regulators have approved plans for a wind farm off the coast of Rhode Island, as the Biden administration seeks to increase the nation's renewable energy capacity.

The project will be smaller than initially planned, with 12 rather than 15 turbines. It has been redesigned to avoid high-value fishing grounds and shipping channels, which were previously considered for the project.

On Wednesday, the permission from the Interior and Commerce Departments takes the South Fork wind farm one step closer to its goal of supplying enough electricity to power 70,000 households on Long Island, New York, through an undersea cable.

In a design report, among other papers, officials said that the developers were still responsible for them in the future.

Officials argued that denying approval for the offshore wind farm would encourage energy developers to build new power generation in the area that would be fueled by natural gas, oil, or coal, which would emit more air pollutants and have a more significant impact on air quality in the region than the offshore wind farm.

In their statement, authorities said that the decision contains procedures to prevent, limit, and mitigate any consequences. These criteria were created in cooperation with a wide variety of stakeholders, including state and municipal governments, industry, and ocean users.

However, the Responsible Offshore Development Alliance, which represents fishing interests, claims that regulators failed to consider their concerns when implementing cod spawning season restrictions, replacements for long-running biological surveys that will be unable to operate, and safe navigation corridors.

The Biden administration has set a target of producing 30 gigatonnes of offshore wind energy in the United States by 2030 as part of its effort to cut greenhouse gas emissions in half by 2030.

According to prior estimates by the Interior Department, achieving that target would create approximately 80,000 employment. According to a press release, the South Fork project will generate around 130 megawatts of electricity.

What do you think? Leave a comment with your opinion, and if you feel this is important, please share this article on social media with your friends and family.

President Joe Biden's administration imposed additional travel restrictions on South Africa and seven other nations on Monday in an effort to convince Americans that the novel Omicron Covid-19 form is being contained fast.

While much remains unknown about a newly discovered coronavirus variant, the director of the National Institutes of Health said that action should be taken immediately to avoid a situation that makes this worse.

Big Amounts Of Snow Expected In The North East; South Gets Warmer

Several feet of lake-enhanced snow downwind from the Great Lakes and snow for New England and the Central Appalachians. According to the National Weather Service, across sections of the Northern Rockies and Northern/Central High Plains, temperatures will be 15 to 30 degrees above normal.

According to the Department of the Interior's long-awaited study of oil and gas drilling on federal lands and waters, which was issued on Friday, an increase in leasing costs should be implemented, considering environmental concerns in leasing decisions.

The Supreme Court is now debating the future of abortion rights in the United States. The conservative majority may be set to overturn or severely restrict the effect of the historic Roe v. Wade decision, which legalized the contentious operation.

New hazards are posed to the American people by the COVID-19 omicron strain, which emerged. At the same time, President Biden and his administration attempted to restrict the spread of a virus he had sworn to shut down during the 2020 presidential campaign.

Donald Trump, the former President of the United States, has escalated his engagement in the 2022 Republican primary elections as part of his effort to reshape the Republican Party in his image permanently.

US Sends 5 Lawmakers To Taiwan To Defy The China Government

Opening Plenary with Xi Jinping, President of the People's Republic of ChinaWorld Economic Forum/Flickr. Five members of the United States Congress landed in Taiwan on Thursday to meet with government officials, breaking Beijing's prohibition on visiting the disputed island.

Even The President Can't Escape The Pandemic; Visits Nantucket With The Family

President Biden Visits The Dundalk MarineMaryland GovPicsFollow/Flickr. During their visit to the island of Nantucket this week, President Joe Biden and First Lady Jill Biden sought to maintain the feeling of normality that the country had been looking forward to during this Christmas season.

President Joe Biden stated Friday that the United States would begin restricting travel from South Africa and seven other nations on Monday due to the emergence of a new coronavirus type.

Democrat Rep. Eddie Bernice Johnson, 85, of Texas, who just announced that she would not run for reelection, stated that intra-party squabbling over President Biden's social spending plan had a role in her decision to step down from the House of Representatives.

Trump Hints On A 2024 Election Run In A Twitter Statement

On Thanksgiving Day, former President Donald Trump released a statement where he hinted at a prospective presidential candidacy in 2024, according to the New York Times. The comment was a play on Trump's 2016 presidential campaign slogan, Make America Great Again, and it has fueled suspicion that he is plotting a return to the political scene.

On Monday morning, Donald Trump's longtime personal attorney and self-described fixer, Michael Cohen was formally freed from jail after serving the majority of his three-year sentence from his luxury Park Avenue apartment, which he had occupied for the previous year and a half.

On Thursday, Representative Marjorie Taylor Greene, a Georgia Republican who is one of President Donald Trump's most ardent supporters in Congress, laid out requirements for a Republican leader who wants to earn her vote for House Speaker if Republicans can retake the majority after the 2022 elections. She also expressed skepticism about House Minority Leader Kevin McCarthy's chances of being elected to the position.

According to a court filing from his legal team on Wednesday, former President Donald Trump is accusing the House select committee investigating January 6 of being so relentless in search of his White House documents that it might permanently harm the presidency.

Former President Donald Trump and his allies are threatening House Minority Leader Kevin McCarthy with the speakership, setting the stage for a year-long dynamic that is already encouraging the Tea Party wing of the Republican party and influencing McCarthy's decision-making as he formulates a strategy to retake the House next year.

Because of a significant spike in attacks and disruption of airline employees, Attorney General Merrick Garland urged federal investigators to prioritize cases involving violence on flights.

President Biden About The Arbery Case: "Our judicial system is doing its job, but that alone is not enough."

President Joe Biden stated Wednesday that the guilty convictions in the trial of Ahmaud Arbery's assassination show that our judicial system is doing its job, but that alone is not enough.

In a statement released on Wednesday, the White House announced the creation of a new climate-focused division under the Office of Science and Technology Policy, with Stanford professor Sally Benson serving as its director.