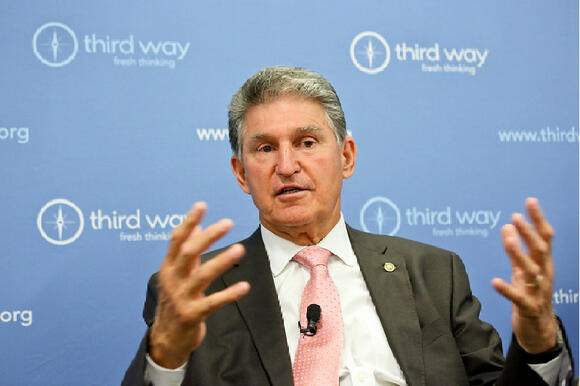 Senator Joe Manchin of West Virginia, a conservative Democrat who represents the state, has signaled to the White House that he opposes a major climate policy in Vice President Joe Biden's multitrillion-dollar climate and social programs package, according to the New York Times.

If the president wants to approve the legislation via a procedure known as reconciliation, he will need the backing of all 50 Democratic senators in the Senate.

President Biden had pledged to reduce greenhouse gas emissions in the United States by half from 2005 levels by 2030, but one important instrument that the administration intended to employ to accomplish that goal now seems to be out of reach for the time being.

Energy firms are already shifting to renewable energy, according to Senator Joe Manchin, who chairs the Senate's Energy and Natural Resources Committee.

Manchin made the statement during an interview on CNN in September.

In less than two weeks, global leaders will convene in Scotland for the United Nations Framework Convention on Climate Change.

President Biden and John Kerry, his climate envoy, have been working hard to restore the United States' reputation on climate problems following years of inactivity and climate change denial.

"I'm not going to pretend it's the best way to send the best message. I mean, we need to do these things," Kerry said. He said that if Congress fails to pass significant climate change legislation, "it would be like President Trump pulling out of the Paris agreement, again."

What do you think of Manchin & his view?

We are seeing rather mild East/South-East flow across South Florida this afternoon. As is usual in this easterly environment, we have a significant quantity of low-level moisture trapped behind a low-level inversion, but the air above the inversion (located approximately 800mb) remains rather dry.

This morning, a cold front is moving into the island on the Big Island. A hard air mass is sweeping over the island, resulting in frigid morning temperatures that plummeted into the 50s in several places.

The Supreme Court Could Overturn Roe v. Wade. What Could This Mean For The 2022 Midterm Elections?

Since it is possible that the Supreme Court couldoverturn Roe v. Wade, the future of reproductive rights in America is set to become a significant and perhaps defining issue in the 2022 midterm elections.

Snow Expected For The North West For The Weekend

Mid-level clouds generally scattered to overcast persist throughout much of Southern New England this afternoon, with lower cloud cover near the Berkshire Mountains. West/North-West flow dominates conditions in Southern New England, trapped between two weak frontal systems: one near the mid-Atlantic coast, which leads to a shield of clouds over our far southern offshore seas, and another, more noticeable but still weak, frontal system over western Quebec.

Low Temperatures in the Morning, Showers Throughout The Day

Morning lows in the mid-40s to low 50s are anticipated throughout north and central Georgia as the day starts. Light winds and temperatures in the upper 40s to low 50s are forecast across the region as the day begins. Patchy fog and low stratus may probably form in this region, most likely in central Georgia, due to the weak winds, dewpoints around the anticipated low temperatures, and lack of low-level cloud covering at this time.

By this evening, cold advection alone will have caused temperatures to plunge throughout the night, with wind chills in northern zones reaching temperatures below zero. The wind gusts over 40 mph that we have seen today will reduce this evening and gradually fade during the night as the surface high rises.

Light Snow Showers Expected In The North of New York; Temperatures To Rise A Bit On Saturday

As west winds intensify, light snow showers along and north of the New York Thruway are expected late tonight, mixing with or changing to rain and extending south over central New York Saturday afternoon, and a shift back to snow north of the Thruway on Saturday night is also anticipated.

A relatively upper-level concrete trough is now located in the latitude of 36N and longitude of 158W. Multiple weak upper-level lows are snaking through the eastern Pacific, close to the southern California coastline.

As a weak upper-level low-pressure system over southern California gradually widens out into a trough as it moves eastward into New Mexico, fair and warm weather is predicted to prevail.

A weak front should bring a change in the wind direction from southwest to northerly throughout the day, but there will be little danger of rain due to the presence of just high-level clouds.

Florida Gov. Ron DeSantis wants to reconstitute a civilian-military force similar to those during World War II, which he would command rather than the Pentagon. According to DeSantis, the proposal was put out on Thursday to better help the Florida National Guard during crises such as hurricanes.

The extended prediction starts dry, but conditions quickly deteriorate over the weekend and the following week. Across the course of Sunday, a pair of mild waves will move eastward from the Mid-MS river basin to the Carolinas, with the significant consequence being a little increase in cloud cover, mostly over northern Georgia.

As Florida Republicans, backed by Gov. Ron DeSantis, deepen their opposition to President Joe Biden's coronavirus vaccination requirement, they are experimenting with a new tactic to encourage opponents: providing government money to those who have not been vaccinated against the virus.

Morning Fog In California; Temperatures around the 60s-70s

Most of the higher coastal terrain, including the San Diego County mesas, was obscured by fog this morning, with visibility in several places reported to be less than a quarter-mile, according to Weather.Gov.

Republicans in Senate Threaten Another Government Shutdown Over Vaccine Mandate

Despite an announcement from congressional leaders on Thursday of an agreement to extend funding into February, the federal government faces the threat of shutting down on Friday at midnight because Republican senators object to President Joe Biden's vaccine mandate, according to the Washington Post.

After six years as CEO and 16 years with the firm, Jack Dorsey has decided to step down from his position. He believes that it is past time for the firm to move on from its early years. Dorsey co-founded Twitter with others, including Evan Williams, who replaced him as the company's founder and CEO in 2008, among others.

As the more infectious Delta variant of the Coronavirus spread across Texas, public health experts concentrated their efforts exclusively on September to assess the effectiveness of the COVID-19 vaccine.

Sunny and Dry Weather in the State of Florida; The End of the Hurricane Season

The aftermath of a cold front has brought sunny, dry, and cool conditions throughout the state today. Inland areas of North Florida may get frost and light freezing tonight: Low temperatures ranging from 29 to 36 degrees.

Most of the country will see warmer temperatures in the coming days; southern California will have an increased risk of wildfires. Over the next few days, persistent upper-level ridging in the West, longwave troughing in the East, and a cutoff low over Baja California will contribute to the spread of warm air throughout most of the continental United States.

Clouds are Building above the State of Vermont; Minimal Snow Expected

Cloud cover begins to build Tuesday afternoon again due to the arrival of another fast-moving cyclone. As the wave swings in from the west to the east, the temperature profiles in the models continue to be chilly, increasing the likelihood of snow showers Tuesday afternoon. QPF, on the other hand, is restricted by the low moisture content of the surrounding atmosphere.