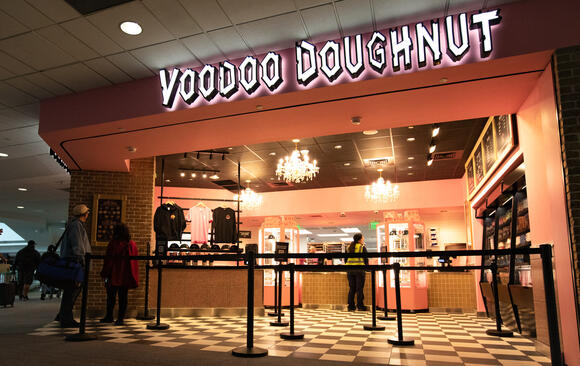 But in addition to bringing its famed Maple Bacon Bars and other artisan doughnuts to the airport, Voodoo is playing along with the conspiracy theories that prevail at DIA.

Voodoo’s airport location has a special blue alien mascot, which the doughnut franchise and airport officials say is a nod to the airport’s conspiracies. (The doughnut shop is named Voodoo after all and it opened around Halloween—so this kind of marketing is well-played).

Beyond the Illuminati bunkers and the cursed Mustang statue, one of the lesser-known conspiracy theories at the airport is that it’s located at W104' 44' 30' N40' 36' 10', the precise coordinates given to the humans by the aliens in Steven Spielberg’s “Close Encounters of The Third Kind.”

It’s a good storyline, but the geography isn’t quite right: If you were to arrive at the coordinates provided in the 1977 sci-fi blockbuster, you’d actually land 51 miles northwest of the airport.

Conspiracy theories aside, Voodoo’s airport location is its third in Colorado, with a fourth one arriving soon in Boulder.

“Although Voodoo Doughnut was founded in Portland, it feels like they are right at home here at DEN,” said DEN CEO Phil Washington in a press release. “We’re honored that they selected DEN as their first airport location. Passengers have been eagerly waiting for Voodoo to arrive, and so have we.”

Voodoo Doughnuts joins Dunkin’ Donuts, which has an outpost on the A Concourse, as the airport doughnut shops.

Voodoo Doughnuts is located on the mezzanine level in the center of Concourse B. It is open from 5:30 a.m. to 9:30 p.m. daily.