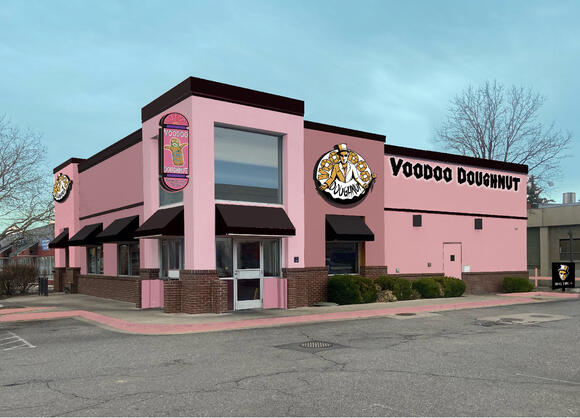 Rendering of Voodoo doughnuts' planned Boulder location, which will take over the space of a former KFC/Pizza Hut drive-thru.Voodoo Doughnut

(Boulder, CO) A bright pink building near 30th Street and Arapahoe Avenue has had Boulderites guessing what type of business will take over the former KFC/Pizza Hut drive-thru.

Will it become a mini Boulder outpost of Casa Bonita, as some Redditors suggested? Or a bikini barista?

Nope and nope, but we have an official answer: Cult favorite Voodoo Doughnuts confirmed it would open its fourth Colorado location in Boulder. The Portland-based chain has two Denver locations, plus a newly opened doughnut shop on the B Concourse at Denver International Airport.

Voodoo says the official opening date for its Boulder shop “will be revealed in the coming months.”

The doughnut purveyors claim to be the originators of the gourmet doughnut category, offering 50 artisan flavors, which include 25 vegan choices. The Underground Donut Tour recently deemed Voodoo’s Bacon Maple Bar the world’s greatest yeast doughnut. Other unique doughnuts include a blunt-shaped maple doughnut with cinnamon sugar and red sprinkle “embers,” and cereal-topped pastries.

Voodoo first opened in Portland in 2003, taking over a hole-in-the-wall storefront scrunched between two nightclubs. The Boulder location will be Voodoo’s 15th shop.

The company says it plans to hire 75 new employees from the local community and will offer competitive wages, affordable health care and liberal PTO, in an environment where no name tag or uniform is required, letting the team be as unique as the doughnuts themselves.

“We are super excited to expand the brand in Colorado,” said Chris Schultz, Voodoo Doughnut CEO, in a statement. “Having Boulder be a part of the overall growth of Voodoo and bringing additional job opportunities to the community, that’s what it’s all about.”