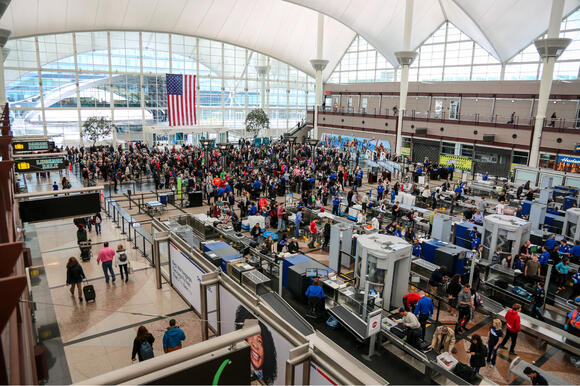 As travel bounces back to pre-pandemic levels, and mirroring a nationwide trend, customer satisfaction scores at DIA dropped this year.Denver International Airport

DIA, which was ranked the No. 3 busiest airport in the world earlier this year, scored 759 on a 1,000-point scale in the J.D. Power 2022 North American Airport Satisfaction Study.

In 2020 and 2021, when airports were slower than normal due to the global pandemic, DIA’s satisfaction score was 793.

DIA’s score is also below the large airport average of 789.

According to J.D. Power, overall customer satisfaction at North American airports was at an all-time high in 2021 when passenger volumes were a fraction of the historical norm.

Now, passenger volume is back up to 91 percent of pre-pandemic levels and labor shortages are causing a record number of flight cancellations, prompting the sky-high satisfaction scores to fall back down to Earth.

What’s more, inflation is hitting the airport, with 24 percent of travelers saying they didn’t make any food or beverage purchases at the airport because they were too expensive.

Other pain points include expensive airport parking and not having ample options when it comes to parking. Parking rates increased this year at most DIA lots.

“The combination of pent-up demand for air travel, the nationwide labor shortage and steadily rising prices on everything from jet fuel to a bottle of water have created a scenario in which airports are extremely crowded and passengers are increasingly frustrated—and it is likely to continue through 2023,” said Michael Taylor, travel intelligence lead at J.D. Power in a press release.

In some ways, Taylor explains, this is a return to normal as larger crowds at airports tend to make travelers more frazzled, but in cases where parking lots are over capacity, gates are standing room only and restaurants and bars are not even open to offer some reprieve.

At DIA, the airport is in the midst of a major construction project that involves building new security checkpoints and renovations to accommodate 100 million annual passengers.

In the past, DIA has been recognized as a passenger favorite, winning USA Today Readers’ Choice Award for “Best Large Airport.” In 2020, J.D. Power’s airport satisfaction study put DIA at No. 4 in the mega airport division.

Can you guess how many calories are in the Broadmoor’s gingerbread display?

Traveling home with leftovers? Here’s what TSA will confiscate.

Can you get pumpkin pie through security? TSA says "yes."Photo byElement5 Digital / UnsplashonUnsplash. (Denver, CO) You know that TSA will confiscate your water bottle or a full-size shampoo container. But does the “no liquids” rule greater than 3.4 ounces apply to certain Thanksgiving staples like gravy or cranberry sauce?

Citizen Rail has a prix fixe menu with lots of options, including a turkey dinner.Photo by5280 Productions/Citizen Rail. (Denver, CO) There are merits to going out to eat on Thanksgiving. You don’t have to worry about burning your bird, coordinating oven time for the turkey’s supporting cast members (green bean casserole, pies, rolls and the like), or scrubbing that stuffing pan when you’d rather take a tryptophan-induced nap.

Try serving an autumnal riff on an Old Fashioned this holiday season.Photo byDeviation Distilling. (Denver, CO) By now, you’ve probably had your fill of pumpkin-spiced beers and cranberry-flavored everything. So, if you’re looking for an after-dinner cocktail to serve at your Thanksgiving gathering, how about putting a seasonal spin on the Old Fashioned?

The Gaylord Rockies has a Charlie Brown Christmas-themed ice slide inside the Ice exhibit.Photo byBrittany Anas. (Denver, CO) When it comes to classic holiday movies, “Charlie Brown Christmas” is among the best. But instead of just watching it this year, Christmas enthusiasts can immerse themselves in a frozen Peanuts wonderland with larger-than-life ice carvings that recreate scenes from Charles Shultz’s 1965 animated television special.

At Denver’s newest pop-up restaurant, a blindfold is required

A dining in the dark pop-up is coming to Denver in December.Hidden Denver. (Denver, CO) You’ve been to a dimly lit restaurant before. But have you ever dined completely in the dark, with a blindfold on and left to determine what you’re eating without being able to see it?

Iceland's Blue Lagoon is rich in the silica.(Jeff Sheldon / Unsplash) (Glenwood Springs, CO) Iceland’s Blue Lagoon is one of those places you see on Instagram and immediately want to transport to—the images of the milky blue waters nestled between outcrops of black volcanic rocks are absolutely striking.

What did Coloradans drink on Election Night?

Coloradans ordered more booze on Election Night when compared to typical Tuesdays, according to Drizly.Brittany Anas. (Denver, CO) We may still be waiting on results in the tight 3rd Congressional District race between Republican Rep. Lauren Boebert and Democrat challenger Adam Frisch, but we do have a definitive answer about what Coloradans drank on Election Night.

(Denver, CO) To help rock the vote, several Denver-area eateries offer freebies on Tuesday, Nov. 8, with some deals offered on Nov. 9 as well. That’s right: Your “I Voted” sticker can earn you a taco, doughnut, cocktail and more.

Are you brave enough for this scary Denver Halloween staycation?

Boulder Social opened in central Boulder this fall.Tim Romano Photography / Boulder Social. (Denver, CO) Stout Street Social has been catering to theater-goers and convention attendees in Denver since late 2014 when it opened. Now, the restaurant has expanded its social circle with a second location in Boulder that’s serving shucked oysters, and hand-tossed pizzas and will soon be brewing its own craft beer, too.

A 25-acre cave property near Glenwood Spring is for sale for a cool $2.45 million.Integrated Mountain Group. (Glenwood Springs, CO) Batman, are you interested in relocating from Gotham City to enjoy a quieter, slower-paced life near a Colorado resort known for its hot springs?

10 mistakes tourists make when they come to Denver

Would you stay in the most haunted room at this Denver historic hotel?