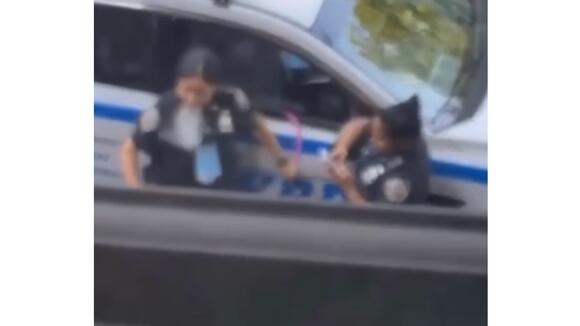 Two female NYPD police officers have been caught on camera smoking marijuana while in uniform, on the job, and standing next to an NYPD squad car. Of course, mixed opinions have flooded the internet since marijuana has become recreationally legal in New York.

A video sourced here shows the police officers taking a luxuriated smoke break while clearly on the job.

“While these discussions continue, there is no change in NYPD policies, procedures, or testing protocols regarding the use of Marijuana by uniformed members of the service,” says the NYPD spokesperson.

NYPD Chief Keechant said in a memo that anyone affiliated with the NYPD is prohibited from smoking marijuana. He says, “existing department policies that prohibit the use of marijuana remain in effect. Members of the service are not permitted to use cannabis on or off duty and will continue to be subject to random, scheduled, and for-cause drug screening.”

So truly, according to the NYPD Department Manuel, smoking “in uniform in public” is prohibited. Case closed.