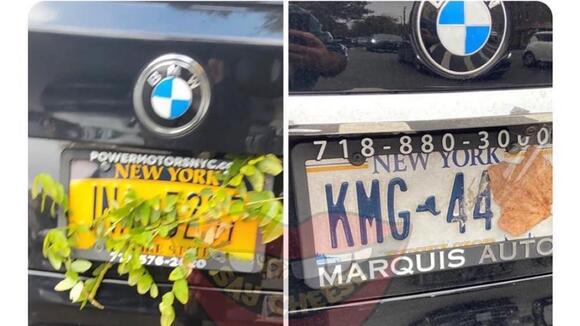 NY Meter Maids are coming for your covered plates!Photo by(@worldlatinstar/Instagram)

As tolls become more expensive, people are becoming more creative when considering ways of avoiding them. New Yorkers have been caught covering their license plates to avoid tolls and traffic cameras.

As if New York’s meter maids weren’t ostracized enough, they’re about to face some real animosity once people begin realizing they’ve begun ticketing for covered license plates. As of March 2022, New York has been preparing to start coming after people avoiding tolls since it's costing the state nearly $2 Million.

Thousands of New Yorkers have been issued hefty tickets for having obscured license plates. The photograph used for this article should help illustrate the situation, people are using strategically-placed leaves, branches, tape, and other litter to block their license plates from being caught at tolls, and in worse situations, traffic cameras.

Other measures being taken to evade license plate detection are bending the plates, sanding, and even reflective spray to cover the plate.

“This year alone, the Port Authority Police Department has written more than 4,000 summonses for toll evasion for people who owe more than $1.7 million collectively. Since 2018, more than 51,000 vehicle registrations have been suspended for failure to pay tolls.” – Robin Bramwell-Stewart from the Port Authority

While the operation may seem clever, transit authorities are wrongly billing people (via EZ-Pass) for toll evasion because the parts of the plates that are being tagged are associated with someone completely different from the people who are trying to evade the toll.

The issue has been going on for quite a while. It wasn’t until this year that New Yorkers have been held accountable for their creativity.