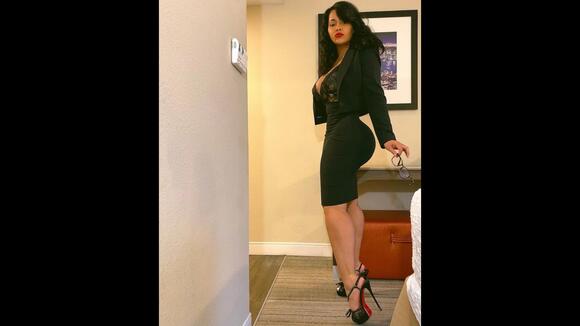 The New Jersey teacher who has become infamous for her physical appearance is now saying she “regrets” going viral. She says she’s "contributed to society’s ‘big b**ty obsession’ and is now considering" a downsize.

According to the American Society of Plastic Surgeons, ‘butt implant procedures’ were up 98% since 2013. This is a textbook definition of a fad, and New Jersey’s notorious teacher is starting to realize it.

The Art Teacher is saying now that she “learned the hard way,” implying that she didn’t see the severity of the influence it had over other people – particularly young people – until it was too late (when she went viral.)

“The response to the video was overwhelming, especially once it became broadcasted over the media. People didn’t think I was fit to teach in a classroom. The obsession with fake b**ties is out of control!”

After encountering countless people weighing in on her disproportionate ‘cartoon character figure,’ The Art Teacher seems to be succumbing to the negative reaction.

Following a recent appearance on the Tamron Hall Show, the teacher has had the opportunity to reflect on her not-so-positive impact. Yes, she has sold a lot of art as she became more well-known, but it wasn’t until the teacher tried identifying with the people advocating for body-shaming toward women, that she realized she was a square peg trying to fit into a round hole.

The Art Teacher, Mrs. Diaz, has yet to announce any procedures or official decisions based on the influence of the recent controversy, but she is taking the context of people’s interest in her – as an educator – to heart.