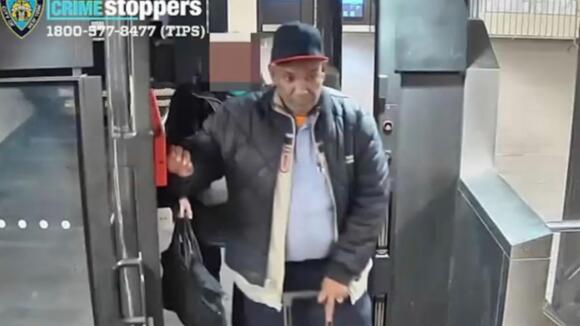 Wednesday morning at the 34th Street subway stop, a man tried grabbing a 10-year-old boy by the legs and pulling the child off the subway train. NYPD is investigating the attempted kidnapping and they're asking for help tracking down the perpetrator.

The boy was accompanied on the train by his 16 and 15-year-old siblings, they were on their way to school via the southbound number 2 train.

The children were being followed by the man, according to police, from the 149th Street station. The man sat down on the subway train next to the boy and said, “get off, this is our stop.” The man then began pulling at the child’s pants as the train approached the 34th Street subway stop.

The 10-year-old’s older siblings intervened and had an altercation at the subway stop with the attacker before the man ran away. According to police, the man suspected of the attempted kidnapping was last seen entering Penn Station.

The suspect (pictured above) was photographed by NYPD subway cameras. NYPD is urging anyone with information about him to come forward. At the time of the incident, he was wearing a black baseball hat, a black jacket, a white sweatshirt, a light blue shirt, and dark blue pants. He was also seen wheeling a suitcase. The suspect’s ethnicity is presumed to be of Hispanic origin, information to contact NYPD is linked below.

No injuries were documented, but the children were shaken up considering the incident happened on their way to school.

New York City subway riders are aware that New York City isn’t the safest city in the world, but this incident has New Yorkers on edge – especially before the holiday season.

NYPD asks anyone with information on the man suspected of the attempted kidnapping to reach out to Crime Stoppers, at 1.800.577.8477.