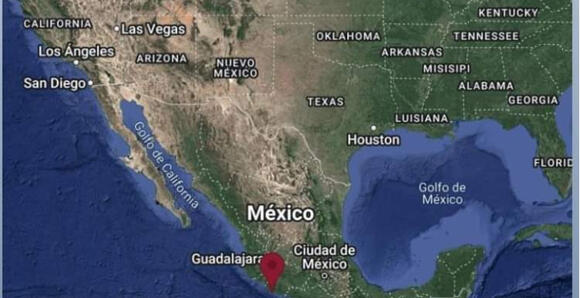 A map showing the location of the September 19 earthquake.(@samijoy__/Instagram)

Today, a magnitude 7.6 earthquake hit the Colima-Michoacan border in Mexico. This earthquake came only hours after another off Mexico’s Pacific coast near Colima. The first earthquake was a magnitude of 5.3.

The second earthquake was said to have shaken buildings in Mexico City, Mexico. Tsunami warnings have been issued but none have yet been confirmed.

Strangely enough, the earthquake is said to have happened on the anniversary of two other devastating earthquakes in Mexico.

Samantha Mayhew, or Sami Joy, is the owner of Wildly Nourished Life, and a Mount Laurel, New Jersey native living and raising her family near Puerto Vallarta, Mexico. She shares her experience when the earthquake hit.

“We were sitting on a bench in the doctor's office, my sister-in-law and I looked at each other and said “did you feel that? Yes yes, earthquake!” We ran outside, could barely stand, holding my daughter in one arm and my sister-in-law in the other. We huddled for safety and tried to avoid power lines. We saw the towers swaying and rooftop pools spilling. It lasted a while, close to 1 minute.”

She was in Puerto Vallarta, Mexico when the earthquake hit.

“The September 19, 2022, M7.6 earthquake near the Pacific Coast of Mexico occurred as the result of shallow thrust faulting. The location, depth, and mechanism of the event are broadly consistent with slip-on or near the boundary interface between the subducting Cocos oceanic plate and the North American plate. The broad-scale tectonics of the Pacific Coast of Mexico is controlled by the northeastward subduction of the Cocos plate beneath the North American plate at a rate of approximately 70 mm/yr.

While commonly plotted as points on maps, earthquakes the size of the September 19, 2022, event is more appropriately described as slipping over a larger fault area. Earthquakes of this size and mechanism are typically about 90x40 km (length x width).

Earthquakes are a common occurrence along the Middle America subduction zone. In the preceding 50 years, there have been 13 other earthquakes M 6.5 or larger within 250 km of the September 19th event. This includes the 1995 M 8.0 event approximately 125 km to the northwest as well as the 1985 M 8.0 event approximately 80 km to the southeast. Both the 1985 M 8.0 event and an M7.1 earthquake near Matzaco, Mexico, in 2017 occurred on the date September 19. Despite the coincidence, there is no specific date or time of year when Mexico is statistically more prone to seismic activity.”

Medical-Grade CBD in NYC: Available to All

TruZen Soft Gels & TruZen Aqua TincturePhoto byBridget Mulroy. To be completely transparent, I was asked to try the following CBD products by Studio ITES in NYC after writing a previous story about the venue. TruZen is offered at some events hosted at Studio ITES and I encourage you to go and try it because these products are well worth writing home, and to you about.

Is this woman wrong for asking a child to snap these pics?Photo by(@WorldLatinStar/Instagram) A woman is catching heat – and not the kind of heat she was hoping for. Risqué photos in the rooftop pool of one of New Jersey's popular hotels turned into a taboo parenting moment when an observer snapped a picture of a child taking the woman’s photographs!

NJ gears up to celebrate its first Weed Wednesday.Photo by(Roxana Gonzalez/iStock) So, in America, a country of consumerism, with Black Friday, Small Business Saturday, and Cyber Monday, is Weed Wednesday such a shock?

Marijuana More Likely to Cause Emphysema Than Cigarettes

Tobacco and Cannabis effects have been analyzed and compared in a lab.Photo by(Sinhyu/iStock) A recent study was published by Medical News Today stating that marijuana smokers are more likely to develop emphysema than cigarette smokers.

The United States of Weed.(@traffic_analyzer/iStock) Congressional leaders held a hearing on Tuesday regarding the Federal classification of cannabis, and states’ progress since decriminalizing marijuana. This past Tuesday, Congress began discussing when and how to decriminalize once and for all.