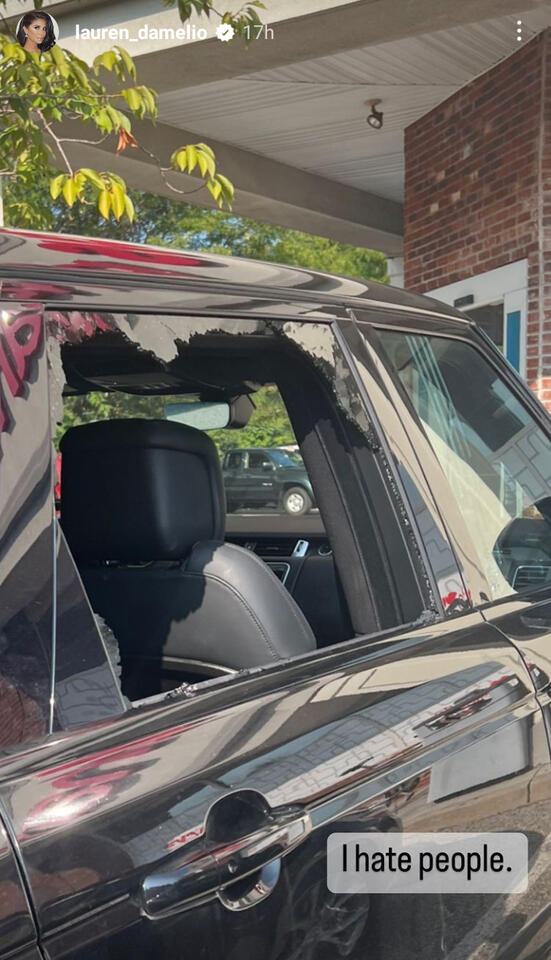 One of the two broken windows on Lauren D'Amelio's car after it was broken into at CVS in Brick, NJ.(@lauren_damelio/Insatgram)

The ultimate tragedy struck yesterday in the parking lot of the CVS in Brick, New Jersey. Celebrity makeup artist Lauren D’Amelio was running errands on Friday afternoon between CVS and TD Bank, both stops are a short distance from each other. After finishing up at the bank, she ran into the CVS. She hadn’t been in the store for more than a few minutes before a woman ran into the store saying, “a car just got broken into.”

Two windows on her car were smashed, and the thieves helped themselves to whatever she had inside.

While the thought of someone breaking into another person’s car is chilling, car theft has been on the rise – especially in New Jersey.

Lauren experienced everyone’s worst nightmare yesterday afternoon, yet she held her chin up and addressed the situation through her Instagram story shortly after it happened.

“Hey, guys. I just wanted to come on here super quick and just tell everyone what happened today because I want everyone to be careful, especially if you live in New Jersey. I was at TD Bank doing a wire transfer and then I shot right to the CVS next door to get stuff for my trip. I was probably in there for like five minutes and as I was checking out, some lady ran in and was like, “a car just got broken into,” and of course, I’m like ‘of course it’s mine.’

So I run out, they broke into my car and smashed two of my windows, and apparently, with the CVS cameras they don’t have them outside, but they have inside cameras and on the cameras, the security cameras show that they probably followed me over from the bank, and once I came in [to CVS] they parked behind my car. Then one of the big men, with a ski mask actually, went into the CVS and I guess didn’t see me by the front. [He] then went back out, went back to the car, reversed the car, waited a little bit, and then blocked my car in again, and then I guess when I wasn’t coming out they decided to break into the car and steal what they could.

Yea, so, be careful, I don’t know if they were just coming for what was in my car, or if they were following me, but, just be careful, don’t leave anything of value in your car, and just be aware of your surroundings because it could have been a lot worse.”

There have been no further updates regarding the suspects. As of now, none of Lauren's belongings have been found and returned. Brick Police are still investigating.