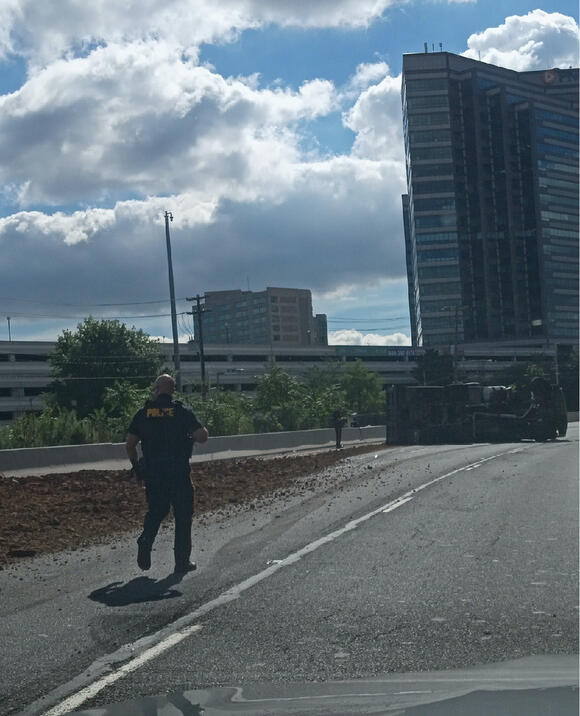 At about 10:30 this morning (September 8, 2022,) the New Jersey Department of Transportation reported the overturning of a dump truck loaded with contaminated soil on Route 18 south, shortly before the entrance to the New Jersey Turnpike in New Brunswick, New Jersey.

The contents of the dump truck, confirmed by NJDOT and EPA to have been contaminated soil, were spread all over Route 18.

The truck operator was a middle-aged Hispanic female whose identity has not yet been released. The photograph of the scene was taken moments before police escorted the female driver out of the truck. She remained in the dump truck for the entire time before first responders arrived, despite it being completely overturned. She appeared to have been uninjured.

Police, fire, hazmat, and ambulances rushed to the scene, despite difficulties accessing the accident. All lanes of traffic were stopped for nearly an hour before police could make it through the traffic and force a merge.

The photo shows police officers using their vehicles to blockade the spillage to make way for other first responders to arrive on the scene.

The spread of the truck’s contents expanded for about fifty feet and across two of the three lanes on the south side of Route 18.

While the NJDOT has reported that the dump truck operator lost control, she claims to have been cut off by a driver (who ironically fled the scene.) Witnesses have yet to confirm the presence of an aggressive driver before the truck tipped over.

Fortunately, there have yet to be any reports of injuries, casualties, or property damage resulting from the overturned dump truck.

Medical-Grade CBD in NYC: Available to All

TruZen Soft Gels & TruZen Aqua TincturePhoto byBridget Mulroy. To be completely transparent, I was asked to try the following CBD products by Studio ITES in NYC after writing a previous story about the venue. TruZen is offered at some events hosted at Studio ITES and I encourage you to go and try it because these products are well worth writing home, and to you about.

Is this woman wrong for asking a child to snap these pics?Photo by(@WorldLatinStar/Instagram) A woman is catching heat – and not the kind of heat she was hoping for. Risqué photos in the rooftop pool of one of New Jersey's popular hotels turned into a taboo parenting moment when an observer snapped a picture of a child taking the woman’s photographs!

NJ gears up to celebrate its first Weed Wednesday.Photo by(Roxana Gonzalez/iStock) So, in America, a country of consumerism, with Black Friday, Small Business Saturday, and Cyber Monday, is Weed Wednesday such a shock?

Marijuana More Likely to Cause Emphysema Than Cigarettes

Tobacco and Cannabis effects have been analyzed and compared in a lab.Photo by(Sinhyu/iStock) A recent study was published by Medical News Today stating that marijuana smokers are more likely to develop emphysema than cigarette smokers.

The United States of Weed.(@traffic_analyzer/iStock) Congressional leaders held a hearing on Tuesday regarding the Federal classification of cannabis, and states’ progress since decriminalizing marijuana. This past Tuesday, Congress began discussing when and how to decriminalize once and for all.