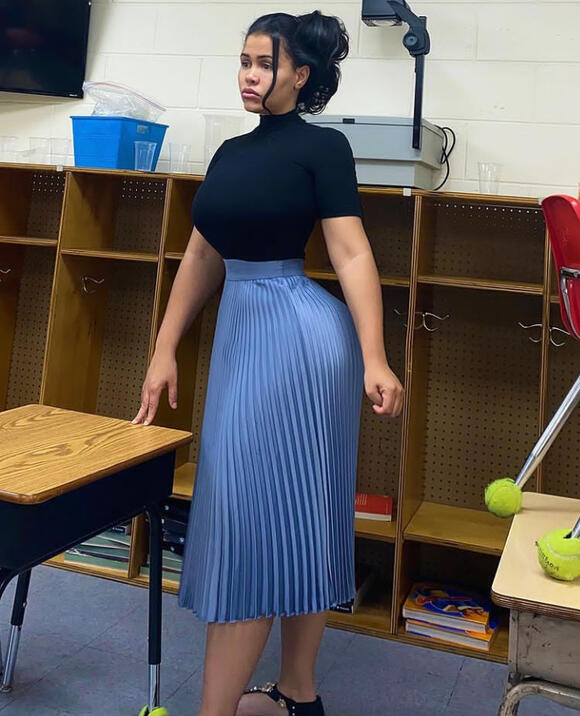 NJ teacher jeopardizes career by using appearance to her disadvantage.(@toyboxdollz/Instagram)

The following story is controversial – and local!

Over the last few weeks of summer, some commotion has been caused by a teacher in Pennsauken Township School District of New Jersey.

Before the story is explained, it’s important to understand that regardless of your personal opinion of how this person appears, the teacher in question feels their job is on the line because of how they look.

Let’s dive into the facts before anyone jumps to conclusions.

ToyBoxDollz, or “The Art Teacher” had all eyes on her over the summer when an Instagram photo went viral. The photo shows a woman in a classroom wearing a blue pleated skirt. She rocks some over-accentuated curves, and without a doubt, photoshop (look at the vertical cubby shelf in the first picture to the right of her arm compared to the same spot in the second picture from the post.)

Let that detail be noted: “The Art Teacher” has obviously undergone quite a few cosmetic procedures, but the photo that kicked this story into motion was without a doubt edited – before it went viral.

When the picture began to pick up traction, parents within the school district began to express their issues with “The Art Teacher" taking suggestive photos in their children’s classroom, not because of her physique.

Considering the safety of their children and “The Art Teacher” having over two hundred thousand Instagram followers, their concern was and is valid.

Since the story escalated, people focused more on the woman's overall appearance instead of what she did.

The educator has also posted a retaliative video on social media and mentioned people advocating for her to keep her job since the situation went viral. She admits to having thought the situation was comical when it began, but has refrained from commenting too much since now she seems to understand her job is on the line.

An educator was taking suggestive photos in a classroom setting, and she knew the spectrum of the audience she was advertising her photos to – she called herself an “influencer” in the above-mentioned retaliative video.

She claims to care about the children she teaches in the aforementioned video, yet she put them at risk. That is the issue, not how she looks. She used her looks to her disadvantage and now her career is about to take a shift – if it hasn’t already.