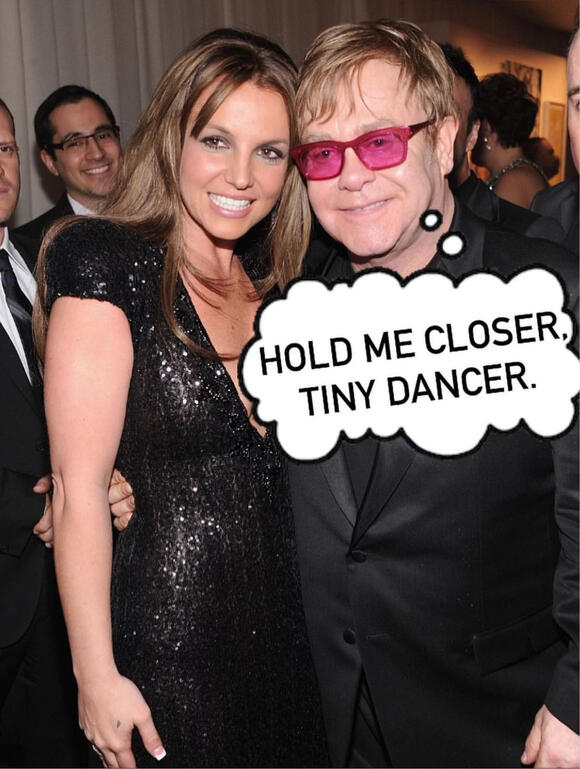 Today, you can’t walk down 6th Avenue in New York without seeing newsstands flashing Britney’s semi-confirmed upcoming duet with Elton John. “Semi-confirmed,” since Britney has sworn for years and years she would never perform again.

Now, according to both Whistle While You Twerk Podcast and Page Six, Britney and Elton John recorded the 1971 hit “Tiny Dancer” together in Beverly Hills last week and it's set to be released under Universal next month!

If you’re a true Britney fan, you’ll have seen one of her most recent Instagram videos with her singing “Baby One More Time.” It sounds cool and it’s like nothing we’ve heard from her before.

In the caption of the post, she specifically says, “I haven’t shared my voice in an extremely long time … may be too long.”

This is shocking since the singer swore she wouldn’t perform again – and she hasn’t always been buddies with Elton John.

In 2007, Elton John spoke about Britney’s mental health decline in an interview with Howard Stern… Elton didn’t speak too kindly of Britney.

In the interview, he said, “It's getting beyond a joke now, I'm sick to death of her copying and laughing at me, she got married to a member of the opposite sex just like me and now she's getting divorced, breakdown, rehab, drugs, even Robbie bloody Williams has had the decency to not get married just to try and emulate me, but Britney shagging Spears has to go and shave her hair off just to make me look foolish because I had to buy my lovely new barnet and now she's at the dentist taking the piss out of me because of the gap in my teeth.”

Just this past weekend, both Saturday and Sunday, Elton John performed at MetLife in East Rutherford, New Jersey where people who attended noted how the former pop sensation sat for the entirety of both concerts.

Did Elton John’s words come back to bite him or is he trying to help Britney get her career back as he claims? Is he trying to make a comeback… through Britney?

If it’s true, regardless of the angle, we can’t wait to hear it, but we also want what's best for Britney!