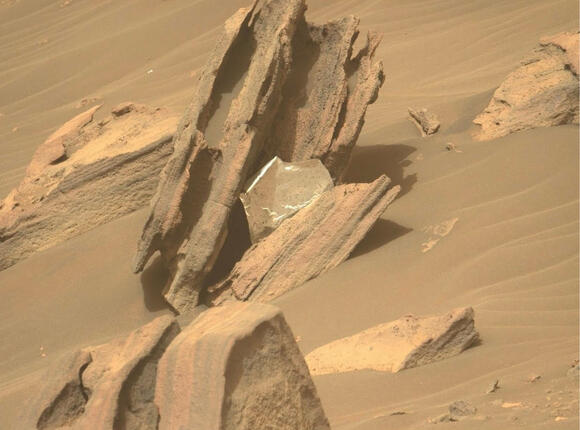 “My team has spotted something unexpected: It's a piece of a thermal blanket that they think may have come from my descent stage, the rocket-powered jet pack that set me down on landing day last year.

That shiny bit of foil (zoomed in on the second image) is part of a thermal blanket – a material used to control temperatures.

It’s a surprise finding this here because my descent stage crashed about 2 km away. Did this piece land here after that, or was it blown here by the wind?”

Images of the thermal blanket can be seen here, as well.

As of now, most people are pretty grossed out. People who spoke out about NASA in the comments are suggesting NASA was “sloppy” when considering the environmental implications. (American Military News.)

NASA explains how the objective of the Perseverance Mars Rover’s mission is to “search for signs of ancient microbial life, which will advance NASA's quest to explore the past habitability of Mars. The rover has a drill to collect core samples of Martian rock and soil, then store them in sealed tubes for pickup by a future mission that would ferry them back to Earth for detailed analysis. Perseverance will also test technologies to help pave the way for future human exploration of Mars.”

While the scientific objective is clear, we all hope NASA will make a new objective to go back and pick up their trash. It says a lot about the human race when our garbage winds up on a planet we haven’t even developed a passport stamp for yet!

A woman was shot at the back of the head while pushing her three-month-old in a stroller.(Lacie Slezak/Unsplash) Amongst peaking gun violence in New York City, a quashed Supreme Court Decision on New York State’s Concealed Carry Permit Law, and a recent spike in interest in the progression of gun rights in the United States, perhaps we can come together and think on the following story.

An epiphytic Pitcher Plant. Contrary to the newly discovered terrestrial variety: Nepenthes pudica (Nepenthaceae.)Bridget Mulroy. Carnivorous plants are bizarre – whether you’re a plant-lover, or not!

The Famous Bendix Diner.(@BleachersMusic/Instagram) Without a doubt, there is nothing more "New Jersey" than the diners. New Jersey has given diners their iconic ambiance. Yes, the state is also famous for other food: blueberries, tomatoes, and unlimited combinations of egg sandwiches, but New Jersey inarguably deserves credit for the retro-themed restaurants with the same, but different variations of comfort food.