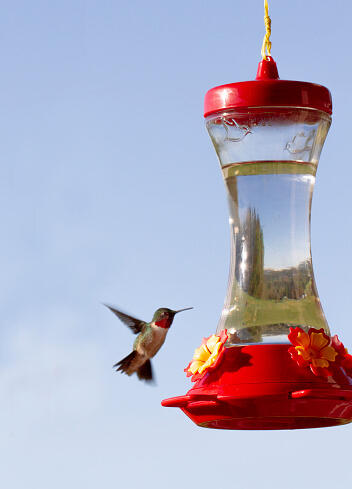 Everything you need to know to attract hummingbirds in 2022!(2ndLookGraphics/iStock)

Believe it or not, there are a lot of New Jersey and New York residents who did not know we get hummingbirds in the spring and summer seasons.

We do, and you can see videos of them in a New Jersey garden here!

By April/early May, each hummingbird makes its way back up the east coast after migrating from the South and Central Americans.

Along the east coast, Ruby-Throated Hummingbirds are most common (like the little bird from the Disney movie Pocahontas.) Toward the end of the summer/early fall, some birdwatchers and gardeners have reported seeing other species in our tristate area.

Birds and Blooms share research on the hummingbird metabolism from Ken Welch Jr., an associate professor at the University of Toronto, Scarborough, intricately studying the metabolism of hummingbirds. “Hummingbirds maintain a blood sugar level, even when they’re fasting, that would make your primary care physician falter.”

So you want to attract hummingbirds to your yard? The official Hummingbird Guide recommends taking the following twelve steps:

“Through many years of experience; here are our full-proof, guaranteed tips to attract hummingbirds: