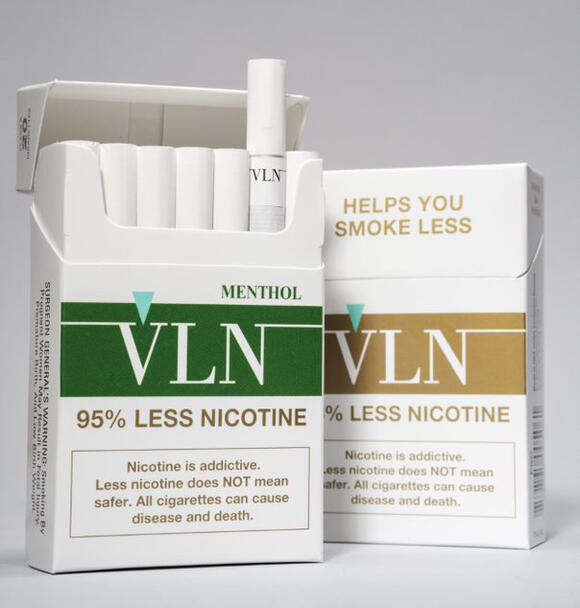 VLN low-nicotine cigarettes have been authorized by the FDA and will be sold in New Jersey.22nd Century Group Inc.

Unlike other methods to help smokers quit, this is the first true cigarette – not a vape, not a patch, not gum, a cigarette.

For a decade, the 22nd Century Group conducted its studies and drew data from government-funded trials overseen by the FDA. Thanks to science, people are a step closer to quitting cigarettes.

Being authorized by the FDA is no easy task, and neither is quitting cigarettes, yet here we are.

The product was piloted in Chicago, and because it helped so many people there positively change their smoking habits, it’s expanding across the country. As VLN cigarettes make their way onto the east coast, we wanted to know more about the product and its potential.

James Mish is president and chief executive officer of 22nd Century Group Inc. He was asked some of the hardball questions the smokers want to know. With all the changes in laws lately surrounding cigarettes, Mish’s responses shed a great deal of light on the unknown.

Below are his responses to the top ten questions people asked when hearing of this new cigarette authorized by the FDA. Read on if you’re amongst the majority of smokers looking for hope in quitting for good.

A pack of VLN® cigarettes is similarly priced to full nicotine premium brands, at about $9 to $12, depending on tax. It is important to note that 22nd Century Group’s VLN® cigarettes contain 95% less nicotine than conventional cigarettes and are designed to help people smoke less. This product is now at Chicagoland Circle K Stores, which is the pilot for what the company plans to be the national rollout.

2.) Is it the same as modifying the cannabinoid levels in cannabis plants?

Actually, the process is quite different. Our intellectual property covers multiple technologies in tobacco, hemp/cannabis, and other high-value plants. Our plant transformation capabilities improve commercially critical traits in hemp/cannabis such as cannabinoid content, yield, flavor and aroma, physical characteristics of the plant, disease resistance, drought tolerance, and nutrient production.

22nd Century has demonstrated its ability to generate new, tailored hemp/cannabis lines through broad-based techniques such as molecular breeding and mutagenesis, which necessitate the creation of hundreds or thousands of plants that are then genetically sequenced to identify those with the desired genetic traits. This plant transformation breakthrough enables the desired DNA sequences to be inserted directly into or created from a plant’s existing genetic material, creating a more expedient and focused methodology to achieve the desired outcome. Unlike other more widely available gene-editing technologies like CRISPR-CAS-9, this technology is allowed for use in cannabis.

3.) What about the people who haven't been able to quit smoking cigarettes after 90 days?

Over the past decade, the FDA and other notable groups have conducted more than 50 government-funded, independent clinical trials, and [the FDA] recently issued authorized MRTP (modified risk tobacco product) status. The research was conducted by or for esteemed public health institutions and universities, including the FDA; the National Institute on Drug Abuse (NIDA); Centers for Disease Control and Prevention (CDC); the National Cancer Institute (NCI); Johns Hopkins University; and Mayo Clinic, to name a few. VLN® cigarettes are the only conventional cigarette to earn this designation. Moreover, the FDA strongly encouraged us to say on our packaging, “helps you smoke less.”

4.) How will a menthol ban affect sales/interest?

If it goes into effect, the menthol ban could have a very positive impact [on] the sale of our VLN® Menthol King brand. We are also in the process of submitting our response during the comment period to the FDA’s proposed ban, and we are confident that a modified risk tobacco product (MRTP) that has already received this designation by the FDA should be exempt from the proposed menthol cigarette ban. The 22nd Century Group is the only company that has an MRTP combustible menthol cigarette, which would also create potential licensing opportunities [for] our technology to the industry.

5.) What is your vision for the product?

22nd Century Group’s vision for VLN® is to help address the 480,000 preventable deaths caused by cigarette smoking in the U.S. each year. [Regarding] the business, we are expanding globally beginning in South Korea, where we’re beginning to sell VLN®.

6.) How does dropping the nicotine level by so much still work in helping people quit; as opposed to transitioning down levels?

Research has shown that nearly 70% of smokers want to quit, and 50% of smokers attempt to quit EVERY year, but far less than 10% [actually] succeed. We think this product will appeal to those who are looking to quit or looking to reduce their consumption or exposure to nicotine but aren’t yet ready to give up that sensory experience of the cigarette.

VLN® is also exciting from a public health perspective because it’s part of the FDA’s Comprehensive Plan for Tobacco and Nicotine Regulation. When clinical research was conducted with 22nd Century’s research cigarettes (which were the precursor to VLN®), those studies showed that if their regulatory action plan were to be put into place (for reducing nicotine levels in cigarettes), it could save 10 million lives in the first five years of enactment; reduce the number of youth who take up smoking, since the product would be minimally or non-addictive; and would protect future youth from ever picking up a cigarette.

7.) What is the benchmark cigarette these are compared to?

VLN® cigarettes are at least 95% lower in nicotine when compared to all leading cigarette brands sold in America.

8.) Can you share some of the studies done [by you as well as the FDA]?

Here is a link to several studies of our 95% reduced nicotine cigarettes, which span 10 years and were conducted by well-respected institutions. All are independent clinical trials.

9.) Was this method originally implemented with vape liquids?

No, our technology could be used in vapes but today it only applies to combustibles. It would leave cigarettes tasteless, and the point of smoking is the sensation. VLN® helps the smoker disassociate the addictive substance (nicotine) from the physical habit of smoking itself so that the habit goes away or dissipates.

10.) What will happen when people quit smoking cigarettes?

That would certainly be a great day for public health and a great day for America. However, with an estimated 1 billion adult smokers worldwide, unfortunately, we don’t see that happening any time soon.

But more importantly, 22nd Century has wide capabilities in biotechnology, and through our plant science research and development, we have a long runway for the company in terms of its commercial success. Our IP and progress in the areas of hemp/cannabis and hops should ensure our long-term viability as a company.

22nd Century Group have taken a huge step in helping people quit. Looking at the data from Chicago alone, this product may be one of the most effective methods available for smokers; don’t lose hope!

Below are other resources to help people learn about the new cigarettes coming to stores.

Dressed to impress with one of Hermes' most trendy bags.Kyle Devesty. Hopefully, you’re familiar with Hans Christan Anderson’s short story, “The Ugly Duckling.” The story is about a young duckling who is made fun of for looking different from the other ducklings. Time passes, and the duckling discovers it wasn’t a duck – it was a swan – a beautiful swan.