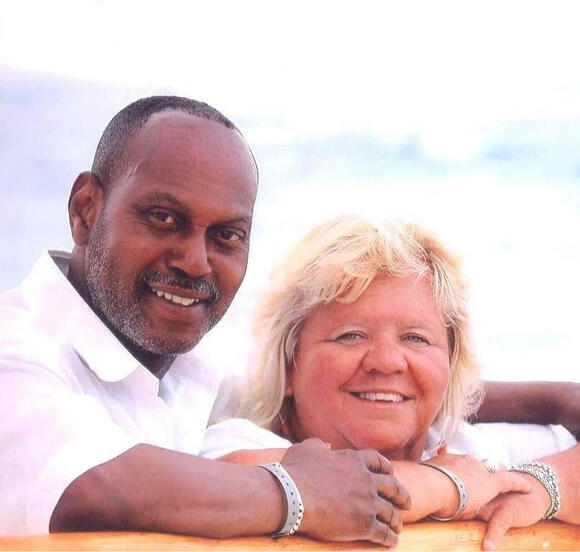 Michael (left) has been charged with the murder of his girlfriend Barbara (right.)(Barbara Andronico/Facebook)

On Thursday, officials announced the charges brought upon a Sayreville man for the death of his girlfriend. She was found dead in the apartment the couple shared when he was arrested last week.

Police responded just before 4:00 am to the Winding Wood Apartments after a 911 call reported a nonresponsive woman.

Barbara Andronico, 62, of Sayreville, was pronounced dead at the scene.

Michael Hodges, 63, of Sayreville, was arrested and later charged with the death of his girlfriend.

The couple resided together and had an intimate relationship.

According to reports from the Middlesex County Prosecutor’s Office, Hodges has been charged with one count of murder in the first degree, one count of aggravated assault in the second degree, and one count of possession of a weapon for an unlawful purpose in the third degree.

The cause of death and information on who called the police have yet to be disclosed. There was also a delay between the judication of the charges brought against Hodges.

Pending a pre-trial detention hearing by the Superior Court of New Jersey, Hodges is being housed at the Middlesex County Adult Correction Center.

As everyone is innocent until proven guilty, the parameters of the case are delicate. The couple lived together and presumably, to family and friends, loved each other.

While Hodges has been officially charged, the case is still very much open. Anyone with information on the couple is urged to contact Sayreville Police Department at “732-747-4444” or Middlesex County Prosecutor’s Office at “732-745- 3330.”

New Jersey's jetties are designed to break tides to make beaches safe for swimmers, they are not intended for swimming.(Michelle Spollen/Unsplash) Events took a horrible turn for a group of friends swimming on the jetty between the 8th and 9th Avenue beaches of Belmar, New Jersey.

Massive fire in Trenton, New Jersey.(Chris Karidis/Unsplash) Shortly before 12:30 am Friday, the Trenton Fire Department responded to a 9-1-1 call reporting smoke and flames on the roof of a building. First responders arrived at North Clinton Avenue, and Monmouth Street, according to Mid-Jersey News (MJN.)

Pride Month has taken on a new meaning.(Unaihuiziphotography/iStock) To anyone and everyone observing Pride Month, Happy Pride Month!. In 2022, not every obstacle for gay, lesbian, bisexual, or transexual person has been overcome. Triumphs made over recent decades within the community – now recognized as the LGBTQ+ community – allow more people who identify with this community today to live comfortably in their skin.