I have experience in all kinds of writing from creative to professional. I especially like to write about weather - and share weather history.

Blood Moon, not a Blue Moon

As it gets warmer, people are finding more time to spend outdoors. This also makes stargazing easy. As the Sun sets, there will be plenty to look at in the celestial events of the night sky. Saturday - May 7th is "International Astronomy Day." This day was founded to raise awareness about the night sky

In addition to the upcoming events in outer space, Saturday, May 7, marks International Astronomy Day. The bi-annual holiday was founded to raise awareness about the night sky and takes place every year in May and October. Each year, the events may very -

The exact dates vary from year to year. The sky celebrations take place when the moon is in the first quarter phase, according to National Today.

This year, the first international Astronomy Day falls the first weekend of May, and the events will occur May 7th. This a excellent opportunity take some time to step outside to enjoy the star-studded sky and views of the moon. The second event will take place on Saturday, Oct. 1.

Here are the top astronomy events to mark on your calendar in May according to ACCU Weather:

Observers north of the equator can expect between 10 and 30 meteors per hour on the peak night with the best viewing window occurring between 3 a.m. and 5 a.m., local time, according to the American Meteor Society (AMS)." (Accu-weather.com)

if there are clouds, part of the meteor show will last through the weekend.

The Eta Aquarid meteor shower will be the second and final of the spring with the next one not taking place until the end of July.

One of the top astronomy events of 2022 will be visible in the sky over North America in the middle of May as the sun, Earth and moon align to create a total lunar eclipse. The moon will pass through the Earth's Shadow on Sunday night - May 15th into Monday. This event does not require any special especial equipment to see. The only requirement is a clear sky.

A total lunar eclipse is sometimes referred to as a "Blood Moon" due to the moon changing color to dark red or rusty orange during the height of the event. 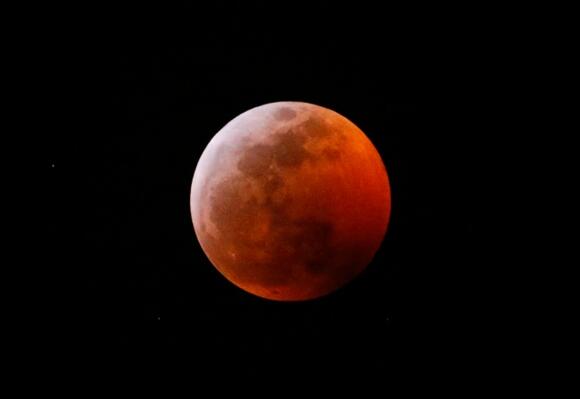 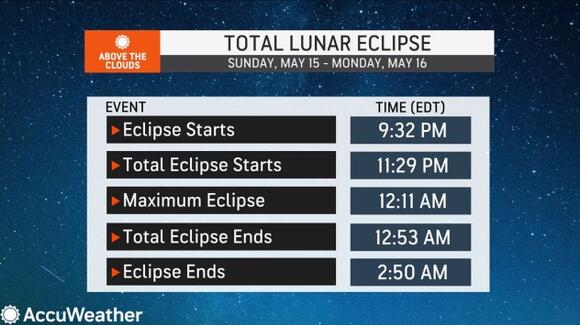 A second total lunar eclipse will be visible from North America in November, giving people another opportunity to see an impressive lunar eclipse in 2022.

As May comes, those who get up early, will be able to see Jupiter appear extremely close to Mars.

In reality, the planets will be extremely far apart, but from the perspective of the Earth, the two will be side-by-side in the sky. This type of event is commonly called a conjunction. 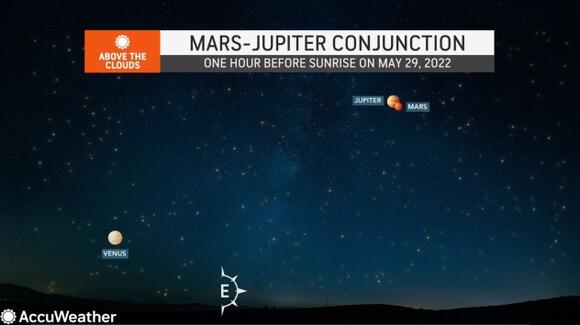 The duo will appear at their closest on Sunday, May 29. The best time to see the conjunction will be about an hour before sunrise, local time. No telescope is required to see Jupiter and Mars, but they will be so close that they will be in the same field of view when zooming in with a telescope or pair of binoculars

I have experience in all kinds of writing from creative to professional. I especially like to write about weather - and share weather history.

No question, the storms that moved through Kansas City packed a punch on Tuesday evening. They. This was Sunday's "Red Moon," from the Eclipse. Matthew Smith got a great shot and submitted it to Fox 4.

Most areas of the US are in the heart of severe weather. The Storm Prediction Center is responsible for forecasting the risk of severe weather caused by severe thunderstorms, specifically, those producing tornadoes, hail of one inch (2.5 cm) in diameter or larger, and/or winds of 60 miles per hour The agency also forecasts hazardous winter and fire weather conditions. It does so primarily by issuing convective outlooks, severe thunderstorm watches, tornado watches, and mesoscale discussions.

The Atlantic hurricane season is just a few weeks away with the official start arriving on June 1st. Forecasters are already predicting a active season.There is even a good chance for a preseason storm to develop for the third year in a row.

Nineteen years ago, on May 4th one of the strongest tornadoes to ever hit the Kansas City metro occurred. Winds more than 200 mph ripped through houses, apartments, and businesses in communities such as Kansas City, Kansas, Riverside, Parkville, and Liberty, Missouri. Four twisters were reported across the KC area from a supercell thunderstorm that tracked east northeast across the KC metro. The F4 twister packed winds near 200 miles per hour as it was cycling up and down through the northwestern part of the Metro.

There is a weather phenomenon that can happen what are called “cold core systems.” According to Fox 4 meteorologist Joe Lauria from his weather blog:. In an idealized world, these systems can help to bring more robust updrafts and convection. Because the freezing level is about two miles up in the atmosphere Thursday afternoon, it doesn’t take much vertical development of clouds to get rain drops to get thrust upwards into that colder air, where they can freeze up and create small hailstones. Sometimes these hailstones fall to the ground.

It is going to be a very active week across the state of Kansas. The severe weather should stay south of the KC region in the short term. The big threat for KC will be heavy rainfall with localized flooding.