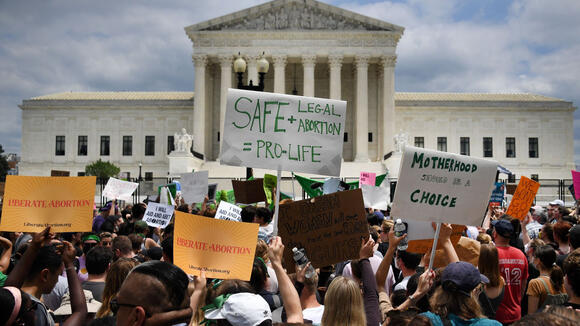 Hundreds of people gathered Friday in front of the U.S. Supreme Court in Washington, D.C., to protest the court's decision to overturn abortion rights protections.

Some demonstrators, many of them young people, cried after the decision. The court building is fully armored and surrounded with a double row of fences and police deployed every few meters.

During the protest, participants chanted slogans such as "it is an illegitimate decision". During the day they also handed out stickers and handkerchiefs with the same messages as the posters.

"I live in reality, even if abortion is illegal, abortions will not stop. And when women look desperate they will do barbarities against themselves," Vanessa, originally from New York, who joined the protest in front of the Supreme Court, told Efe.

"If they are willing to do this barbarity to us, they are going to go against LGBT rights," she continued. This is going to make a horrible mess, this is going to affect couples, people who want to have children and have a complication," she said.

Protests in the U.S. over abortion ban

In front of the pro-choice protesters, there is another group against this procedure. All of them are celebrating the judicial decision with chants and dances, although there is no tension between both protests.

The Supreme Court annulled this Friday the protection of the right to abortion in force in this country since 1973, in a historic decision that will allow each state to decide whether to maintain or prohibit this reproductive right.

The ruling states that the Constitution "does not grant" this right and returns the authority to legislate on abortion to "the people" and their "elected representatives".

The ruling overturns both the "Roe v. Wade" ruling, agreed to 49 years ago, which protected the right to abortion nationwide, and another 1992 ruling, "Planned Parenthood v. Casey," which reaffirmed that protection but allowed states to regulate the process.

Earth has just recorded the shortest day in its history: Here's what it means

Do you feel like you don't have enough time in the day anymore? You're all right. It turns out that the days really are getting shorter. According to England's National Physical Laboratory, on June 29, the Earth experienced its shortest day ever, shaving 1.59 milliseconds off our typical 24-hour cycle, reported Popular Mechanics .