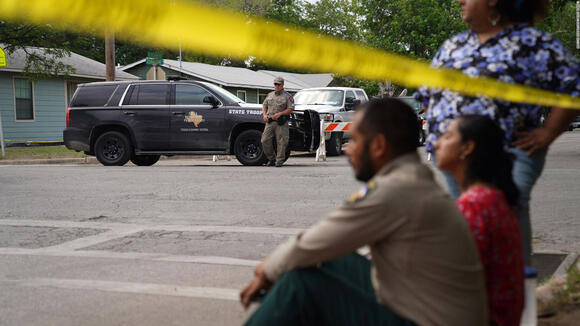 The incident occurred at an elementary school in Uvalde, Texas, where an 18-year-old teenager opened fire on students before being shot by police.

An 18-year-old teenager opened fire Tuesday at a Texas elementary school, killing 18 children and three adults in the deadliest school shooting in the United States in years.

The attack in Uvalde, Texas, a small town about an hour from the Mexican border, is the latest in a wave of deadly shootings in the United States, where the horror of gun violence has failed to spur enough action to end it.

Texas Governor Greg Abbott, a Republican, said the attacker, identified as Salvador Ramos, was believed to have shot his grandmother before driving to Robb Elementary School around noon, leaving his vehicle and entering with a handgun and possibly also a rifle.

"He shot and killed, in a heinous and senseless manner, 14 students and killed one teacher," Abbott said at a news conference, in the first count that later escalated.

The governor said the suspect, whom he described as a local teenager and U.S. citizen, was also "deceased," adding that "responding police officers are believed to have killed him."

At the scene, small groups of children could be seen zigzagging between parked cars and buses, some holding hands as they emerged under police escort from the school, which has students between the ages of seven and 10.

The shooting was the deadliest since 14 teenagers and three adults were killed at a high school in Parkland, Florida in 2018, and the worst at an elementary school since the Sandy Hook shooting in Connecticut in 2012, which killed 20 children and six staff.

"Enough is enough," maintained this Tuesday the vice president of the United States, Kamala Harris after this fatal event. AFP reported.

"Our hearts keep breaking," he said, referring to the litany of school shootings in the United States. "We have to have the courage to act."