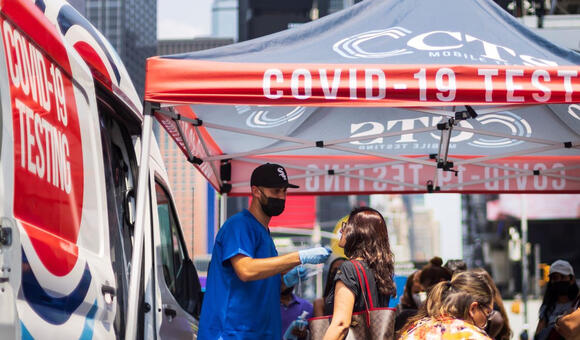 The recent spike in infections has put the city on the verge of entering a high alert level, which is declared when certain hospitalization levels are exceeded and a certain proportion of beds occupied by covid patients is reached.

This month, cases in the city have again risen sharply, to more than 300 per 100,000 population in seven days, according to the latest official data, which also show a clear increase in hospital admissions, a situation that is even worse in other areas of New York State.

In response, local authorities have recommended the use of face masks indoors in all public places, including stores, offices, building entrances, elevators and, in general, any other place where space is shared with strangers.

The subway and the rest of the New York public transportation system, meanwhile, continue to require all passengers to wear masks. In addition, the New York City Council announced that it will distribute another 16.5 million home tests and one million quality masks.

"Home tests and masks offer New Yorkers reliable and convenient ways to protect themselves and others and allow them to enjoy our city," New York City Mayor Eric Adams said in a statement.

New York was at the beginning of the pandemic one of the world epicenters of covid, the city has already accumulated more than 40,000 deaths from the disease, according to official data.