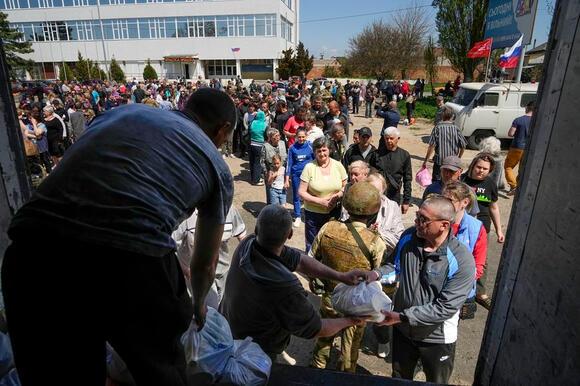 The United States believes Russia plans to annex a large part of territory in eastern Ukraine this month and recognize the city of Kherson as an independent republic, according to a senior U.S. government official.

Michael Carpenter, U.S. ambassador to the Organization for Security and Cooperation in Europe, said Monday that such actions are "part of the Kremlin playbook" and will not be recognized by the United States or its partners and allies.

Carpenter said the United States and other countries have information that Russia is planning a "fake referendum" in the so-called "people's republics" of Donetsk and Luhansk that would annex these territories to Russia. He also said there are indications that Moscow will organize an independence vote in the city of Kherson.

"We believe that the Kremlin might try to hold fake referendums to give it a tinge of democratic and electoral legitimacy, and this is part of the Kremlin's handbook," he stated.

He added that the information hinted that the votes could occur in mid-May. "These fake referendums, fabricated votes, will not be considered legitimate, nor will attempts to annex more Ukrainian territory."

Carpenter did not detail the information that led to these conclusions, although public reports have surfaced that Russia has taken steps to exert greater control over the areas it already dominates and occupies in eastern and southern Ukraine.

He highlighted the fact that mayors and local legislators have been kidnapped, that telephone and internet service has been suspended, and that Russian school curricula will soon be imposed.

Hitler and the Jews

In an interview with an Italian news channel, Russian Foreign Minister Sergei Lavrov said Ukraine could still have Nazi elements even if some personalities, including President Volodymyr Zelensky, were Jewish. "Hitler also had Jewish origins, so it doesn't mean anything," he said according to an Italian translation.

"Lavrov could not hide the deep-seated anti-Semitism of Russian elites," Kuleba said in a Monday tweet. "His egregious comments are offensive to President Zalenski, Ukraine, Israel and the Jewish people. Beyond that, they demonstrate that Russia today is filled with hatred for other nations."