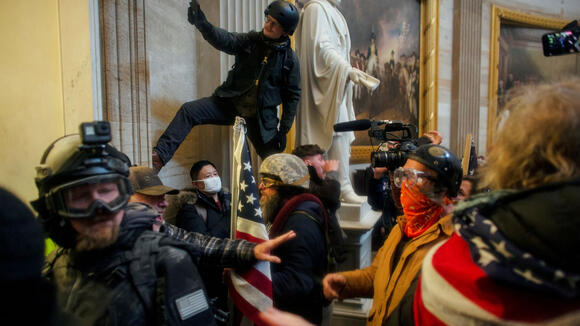 A man linked to a far-right organization pleaded guilty on Friday (29.04.2022) to conspiracy to sedition for the January 6, 2021 assault on the U.S. Capitol, making him the second person to admit guilt on the charge.

Conspiracy to sedition is the highest sentencing charge among all those prosecutors have brought to date against participants in the attempted insurrection.

Ulrich, who faces a possible sentence of five to six and a half years in prison, is part of the U.S. ultra-right-wing group Oath Keepers, to which the only other sedition defendant who has admitted guilt also belongs.

Joshua James, 34, a leader of the group in the state of Alabama, pleaded guilty in early March. Nine other members of the group, including its national leader and founder, Stewart Rhodes, are also charged with sedition.

The Oath Keepers is an organization linked to the citizen militias and focuses its recruitment efforts on ex-military, police and first responders.

There are more than 700 people charged with different crimes for the assault on the Congress headquarters, according to data provided by the Department of Justice.

On January 6, 2021, a mob of supporters of then-President Donald Trump (2017-2021) stormed the Capitol as a joint session of the chambers was being held to ratify Joe Biden's victory in the previous November's elections.

The largest conviction issued so far for the assault on the Capitol, where five people died and 140 officers were injured, fell on a man who attacked police officers with a fire extinguisher and was sentenced to five years and three months in prison.